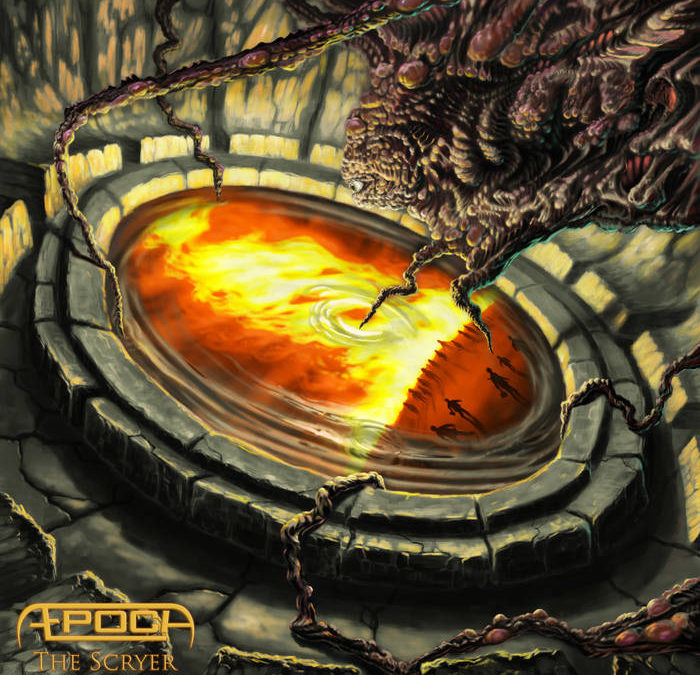 Æpoch wowed many fans, myself included, of Technical and Progressive Death Metal back in 2018, with the release of their debut album Awakening Inception. Not totally surprising when one considers they are from Canada, where several popular Tech Death bands such as Archspire and Beyond Creation originated. However, their style of technical wizardry, combined with the progressive stylings and varied song structures, make them stand out from the crowd. So, when I first saw that The Scryer was to be my next EP for review, I cracked a huge smile.

Ominous acoustics greet me as I press play on Part I of “The Devil Twin” subtitled “The Birth of a Demon” and I know I’m in for a treat. Surely Part II: “The Death of a Man” will open the pit to hell. Sure enough, it wastes no time with a menacing growl and all instruments firing. Thus the onslaught of memorable headbanging riffs, soaring solos, fretless bass and continuously blasting drums begins and continues across the six track EP. The vocals vary in style from low barks to higher shrieks, but mostly staying pretty mid-range through each track and are not ever present, allowing plenty of room for the instruments to really shine.

The back and forth between guitar riffs, licks and solos, drum fills and bass continues throughout the next twenty-six minutes of the non-acoustic tracks. Guitar solos are everywhere, never outstaying their welcome before returning to the grooves. A few tracks, including the final track, “A Brainwashed Civilization”, practically start with a solo before moving into the vocals. Just about every song has at least three or four solos, even a guest solo from Layne Richardson of Becomes Astral on “Shrapnel Baptized”.

I’m a big fan of fretless bass, so to hear it so prominently is a treat. It is given a wealth of time to shine, rather than simply being delegated to the rhythm section the entire time. Track four, “Shrapnel Baptized”, has a wonderful bass intro and a bass solo as the closer of the track as well. There is a section near the end of “A Brainwashed Civilization” leading into a solo as the guitars repeat a hypnotic riff and the bass moans along behind them. It’s beautiful, these are the small moments that make me smile.

Overall, it is slightly less progressively leaning than their previous efforts, but still has just enough touch of prog to keep it flowing and interesting. The only complaint I could make would be the length, as an EP it clocks in at just under thirty minutes, including the acoustic intro track. I’m aware that as an EP I should not expect it to be longer. I just want more from these fellows. I’ll eagerly await their next full length which Æpoch has promised will be more tech.

Biography:  Lakrym is a fan of many types of music from the weird to the predictable.