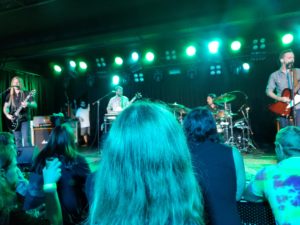 The Venue:  A new room in The Intersection, a long time Grand Rapids concert venue, Elevation has been open less than a year. There is a lower floor area a raised section on three sides. The fourth side, of course, contains the stage. As is always the case with a show in any of The Intersection rooms, the service was top notch, though security has been stepped up. The space itself is sparkling and new. There are good sight lines throughout the venue. I’m not a big fan of security fences in front of the stage, but I can see how it helps the bouncers. Overall, everything was as excellent as expected for such a long time supporter of heavy music (all music really) in Grand Rapids. 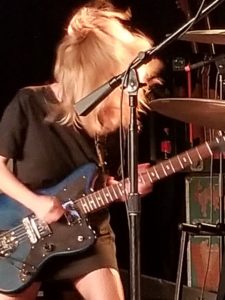 Ume:  This trio plus touring guitarist were completely new to me, so I wasn’t sure what to expect. I didn’t even have time to give a quick listen pre-show. Long story short, they were very impressive. In actuality, I thought they stole the show. Musically, they were tight, but not so tight as to bore. Not all the rough edges were filed down. They play indie rock and roll with some obvious punk influences, reminding me most of PJ Harvey, L7, Sonic Youth, and even a little Team Dresch. Credible (who attended with me and is hopefully getting an interview done with the band) said they reminded him of a rougher, more punked up Paramore. Most of the band focused on playing, but vocalist Lauren LL was a whirling dervish of manic energy. Overall a great discovery. 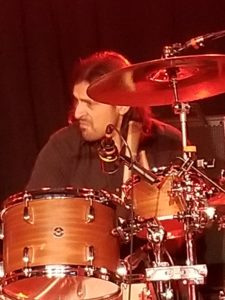 The Sword:  Let’s get something straight right up front. I’m a fan of The Sword. I was before the show and I remain a fan now. However, my fandom has been fairly loose. I only own one album (Apocryphon) and have never been one to learn lyrics to sing along at the live show. I simply have too much to listen to as I process and prepare for reviews. Perhaps the band would have been more impressive live had I known every song and been able to sing along. I certainly enjoyed my favorites from Apocryphon a little more than the rest. First, the good news. The Sword was technically and musically flawless. As far as I could tell, they played everything perfectly. The bad news? There wasn’t enough of the rough edges I like so much. In addition, it all started to blur together. They write and play incredible riffs, but those riffs are often not distinctive enough for me. One other positive. I was super impressed with Santiago Vela III, the drummer. He gave a clinic on hard rock/stoner metal drumming. Absolutely magnificent. I ended up spending most of their 100 or so minute set watching him.

Alright, I lied. I only have three things to talk about on this one. Go support live music every chance you get.