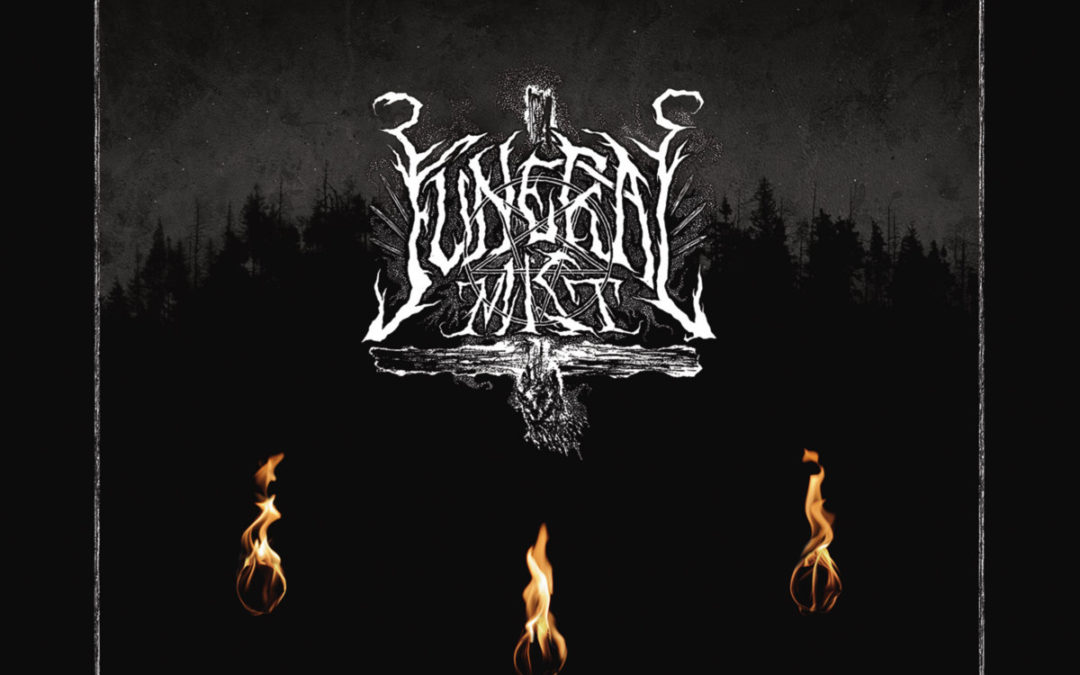 So I’m going to give this album special treatment. I haven’t heard a note of this album (I just received the promo moments ago), and I’d like to write something during the 54:01 of music being played with first exposure. Let’s see what we can come up with…

Before I start, I’ll give a little rundown. Funeral Mist is a one-man band from Sweden, and is conducted by Mortuus, the current vocalist of Marduk, and has been for almost 20 years. Back in 2017, I started making my transition from OSDM and flashy tech-death to the ever-evolving and abysmal realm of black metal. I’ve always liked black metal here and there, but not as my main musical path. Once I joined the Facebook group, ‘Secrets of the Black Arts” (Now renamed ‘Order ov the Black Arts’), and witnessed how deep and versatile black metal truly is, that’s when obsession hit me. Following year, 2018 I made my first black metal AOTY list and Funeral Mist was my #1.

Track 1! A storm and religious Orthodox chanting can be heard, very fitting for Funeral Mist. Music kicks in a little bit, a build-up, and I am officially even more excited than I was before pressing play, which was 2:22 minutes ago? So, this is going great so far!

Mortuus makes his vocal debut for the album and it rings trve as expected. Only briefly though, then mixed back with the chanting. Quiets down….. Then! Bam!!! This is Funeral Mist! Whip cracking blast beats and to the core Swedish black metal intensity on guitars. The chanting is great, I love the texture it adds.

Track 2! Absolutely bonkers!!!! The fact that Mortuus can play this stuff blows me away. Such a talented man he is. So already we see quite a few differences between the first 2 tracks. (He’s doing so much with the guitar riffs, it’s kind of hard to pay attention to me typing, so I apologize in advance).

Track 3! Just like track 2 starting with blast beats blazing, but this track already has more of a traditional black riffing than track 2. Track 2 showed his multiple vocal deliveries, and this continues that. I miss black metal like this, blast beats, and tremolo picking at neck-breaking speeds. Like, that used to be definitive, now black metal can be whatever you want it to be *eye roll* that’s for another day, another topic. Anyways! Back to the action, so far this album is picking up where Hekatomb ended, which is a great sign. I’m curious if there will be a black n’ roll track coming up like Naught but Death from its predecessor. Woah….. The ending to this track is fantastic! Dark, tribal, and primitive. Then, as if things couldn’t get more badass, his vocals warp and twist like a demonic possession.

Track 4! The transition from track to track there was excellent. Kids singing a choir-like song can be heard as the music creeps in and makes its presence known. As the music builds, I feel like that this is going to be an album for the books. I like how unannounced he makes this project. The children return briefly to give us words of encouragement? I have no idea, but it has a nice off-balance with the music. Ah! I look at the title of this track, and it’s entitled ‘Children of the Urn’ makes sense!  Near the last minute, and I’m loving this riff that’s stringy (first word to come to mind) that’s also mimicked by the bass as well, which sounded really nice to the ears.

Track 5! Are those birds I hear? I wanna say that’s what is screeching. The beginning riff leading into the onslaught was singaturely Funeral Mist! This sounds like a specific track from Hekatomb, I wanna say “Shedding Skin?” No complaints, one of my favorite songs from the album, if not my favorite. This track and track 2 are the only ones that don’t span for over 7 minutes. Which makes sense on the over-the-top speed and brutality. ‘Hooks of Hunger’! Damn that was good

Track 6! Now the last two tracks (this and track 7) are both 9 minutes long. I’m envisioning this being a part one and two type deal. Right now we have a slower approach, but the current is strong. Overall, this has been great, and I can’t wait to keep this album in rotation for it to grow. I’m liking this flow and solo-like guitar work. It’s not something you hear too often from Mortuus, and he indeed knows what he’s doing in other fields. Getting close to the end of the track, I hear a meditative chant and twang in the music. This has more of a focused energy than I picked up initially, which adds a whole other face to the song. I wanna restart the song and pay closer attention, but I’m doing this review honestly on my first go. Dueling guitars in this fashion is nice to hear. There’s that underlying riff I’ve heard before in the song playing us out…

Track 7! The finale! Strong winds are swirling around, and I am reminded of Hekatomb once again. For a split second, I heard a Watain-like riff that was cut short. That was pretty cool. Now the unmistakable sound of Funeral Mist takes control and breaks sound barriers with its insanely, fast blast beats. All in all, this has been one hell of an experience! The blackened variety on the riffs is a great touch to show the possibilities of switching notes around and still getting that sound we all know and love in black metal. I was totally wrong about the “part one and two” thing, this is on the other spectrum of slow/mid-paced and less chaotic. From my knowledge, Funeral Mist is strictly a studio band, but I’d like to see any human play the drums that fast for this long. Mind blown! 1 minute left… And the drums cease, and a catchy, blackened riff plays as Mortuus gives us his final screams. And just like that, a crack of a bell abruptly ends the record. No warning, no conclusion.

‘Deiform’ will be released on Friday, December 17th, 2021 through Norma Evangelium Diaboli digitally and physically. After hearing the album and being blown away, I’m about to break my rule and preorder this bad boy now instead of waiting.