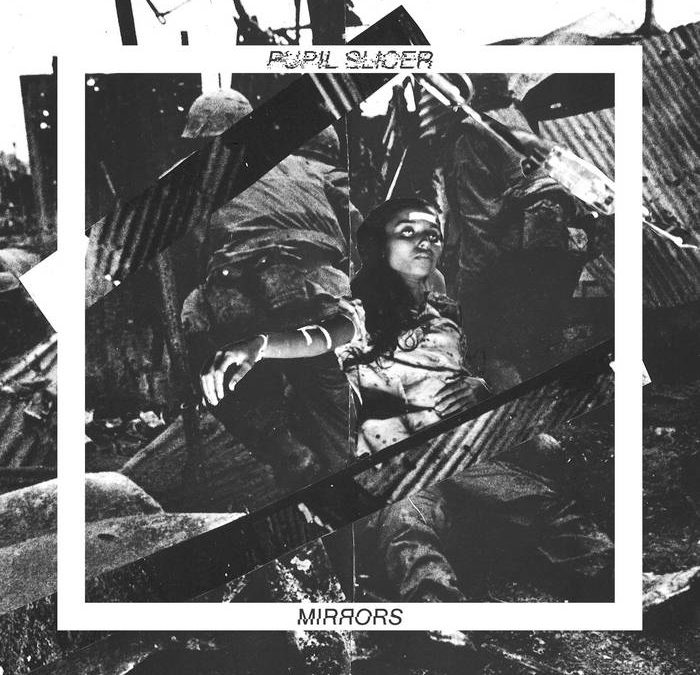 Mirrors by UK grindcore group Pupil Slicer is an exploration into a realm of unfettered and absolute chaos. This album contains twelve tracks that challenge and blur the boundaries of any one genre’s label and they are guaranteed to infuse ferocity into your day.

Mirrors opens up with the track, “Martyrs.” Beginning with sharp whispers of vibrating noise, the track quickly unleashes its fury within the first minute and devolves into unbelievably quick drumming, throat-tearing screams, and deeply resonating thuds from the bass. “Stabbing Spiders” starts like a bomb detonating. Its quick throb is like the pulse of the breathless, and it ends before you can even begin to think of slowing down your very own beating heart. “L’Appel Du Vide” is a disjointed effort to disassemble your thoughts into scattered pieces – and it succeeds. This track is an emotional upheaval. The guitars squeal and squeeze themselves through the energetic bursts of the drums, and the piece ends with what sounds like an electronic string section that has been chopped up and pasted back together. “Panic Defence” is a heavy moving mudflow of thick strings crushing out notes. The vocals bleed out with immense intensity, and then the song is over before you can come to terms with what was just witnessed. “Husk” features drums that are aggressive, and explosive. The vocals are volatile, forcing out flame and grit. This track changes pace at break-neck speed, and it is sure to fill a once depleted energy meter. “Vilified” is immediate chaos – the guitar scrambles to find its footing, the drums are a hammer of destruction coming down, and the song squeals along like an alarm clock blaring in a windstorm. “Worthless” tramples in like a wild animal let loose. The notes cluster in and fly about like wild birds trapped in a room much too small for them. Track eight, “Wounds Upon My Skin,” has an energy here that is unmatched. This song is imposing, dynamic, and entirely forceful. This track switches up between scratchy, fuzzed-up vocals and harsh screams that shoot out between the bursts of power coming from the drums and the guitar. If you only listen to one track from this album, make it this one. With the track, “Interlocutor,” in my mind’s eye, all I could see when this track was playing was a power transformer exploding; the power lines coming undone one sparking section at a time. It sparks along and unravels with eruptive intensity. “Mirrors Are More Fun Than Television” is dirty, menacing, and contains endless surges of emotion.

“Save The Dream, Kill Your Friends” is shifting sands; it changes up without notice and sucks you in without warning. “Collective Unconscious,” the final track, has a superb riff that rolls hard above the quickfire of the drums. It plays out like dream-sequences laid out between nightmarish sections. The tones found upon this track are static shocks of sheer power and flammable emotion, and these characteristics definitely carry through each and every track here.

Mirrors by Pupil Slicer is a highly enjoyable and unbelievably powerful collection of twelve tracks that demand and deserve attention. Make sure to catch its release on March 12 on Prosthetic Records.

Recommendation: I do not recommend this album for driving, unless you are open to being pulled over for driving through six red lights in less than ten minutes.