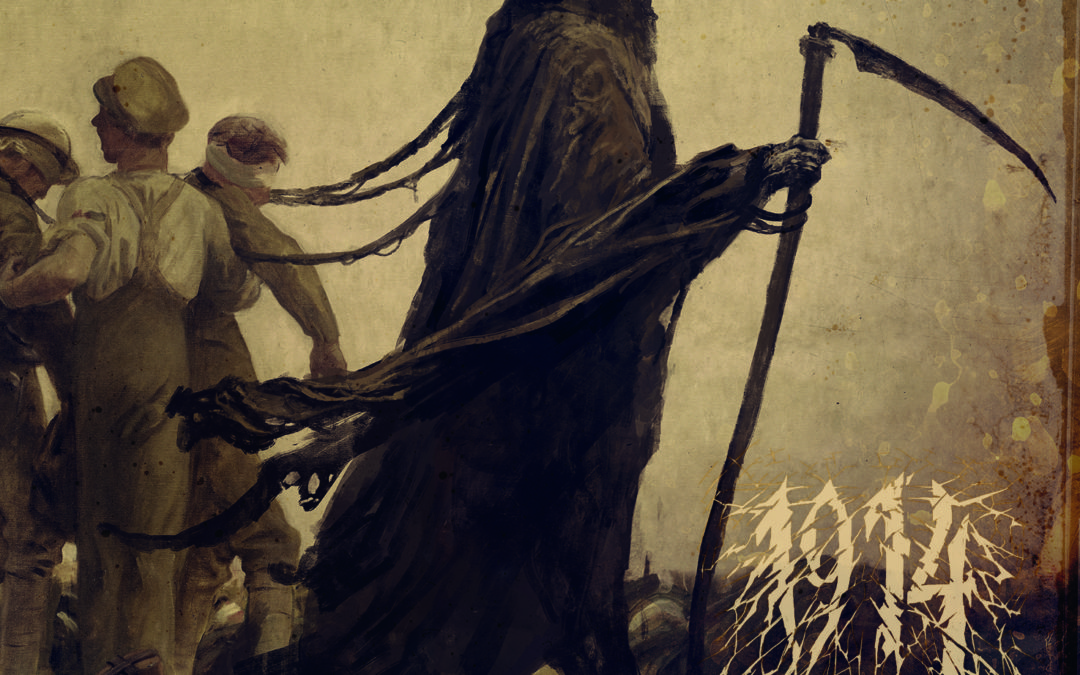 Album – The Blind Leading The Blind

“Grandpa!” the little boy yelled as he ran into the large room. All around them, various family groups were greeting their loved ones, residents of the Veterans’ Home. The little boy hugged his grandfather, then climbed into his lap. For awhile, the small family chatted. Cake and coffee were shared as William joked with his grandson, chatted with his daughter and her husband, and generally had a nice time.

Eventually, as the afternoon wore on, the family helped William up to his own room to have some more private time together. He settled himself into his rocking chair by the window and gazed out at the perfectly manicured landscape beyond. As his family organized themselves in the room, (“No, don’t touch that Conor. That’s your grandfather’s. He’d be sad if it broke.) the old man’s thoughts drifted off to another time and place. Conor wandered back over to his grandpa and tapped him on the arm to ask him a question. When there was no response, he began to feel nervous. “Grandpa?” William whimpered, gazing fixedly into the distance. One thing was certain. He was not seeing anything in front of him. Suddenly, he shrieked, scaring little Conor half to death. For his part, the young boy began to cry and ran to his mother for comfort. His dad walked over and gently shook William’s shoulder, but it was no use. He was somewhere else for the time being.

Young again, in his mind at least, Private McLerin sat huddled in the trench. Things were quiet for the moment, so he had his rifle propped near at hand, had one of his boots off, and was gently rubbing the numb, reddened flesh. That foot done, he replaced his swollen foot in the boot with difficulty, then performed the same task with the other. No sooner had the second boot been replaced than his Sergeant came along.  “Up to the top Private. You and Jones are on lookout duty!” “Yessir Sergeant.”

Heading up the ladder at the lookout post, he saw that Jones was already there. Generally a boring duty, the danger was in being careless. One had to make sure you weren’t a target for German snipers, while still making sure you could see No-Man’s-Land to make sure nobody was coming. Less than one hundred yards separated the two sides, with coils of barbed wire in between making it much harder than expected to cross the short distance, but the difficulty only held true if the lookouts stayed alert.

The minutes ticked by with nothing happening. It was a quiet day today, though certainly the shelling would start at some point. It was then that he noticed something out of the corner of his eye. Movement perhaps? “Jones. Did you see that?”

“No, where?”, the other private whispered.

Carefully pointing, just as the whistle of shells started up, the man said, “There. By that post.”

Unable to hear properly due the artillery starting, Jones leaned in his direction and yelled, “Where?” over the noise.

The private turned to shout his answer, just in time to see the stunned look on Jones’ face as a bullet entered his temple and blew out the other side of his head. Blood and viscera sprayed back into the trench, as the body collapsed where it stood. William, momentarily stunned, stood and looked as his best mate in the trenches turned instantly from vitally alive to a corpse. Then he turned and vomited. A moment later, drawing in great breathes, he composed himself, called for help, and leveled his rifle over the top of the trench.

When William came back to himself, he was seated in his rocking chair in front of his window. His son-in-law was on the bedside phone calling for a nurse and his daughter was rocking his crying grandson on her lap, seated on his bed. He turned away in shame. The incidents were occurring more frequently. He knew other veterans had been dealing with this for years, but for him, it was a relatively new phenomenon. He had hoped his family would be spared the experience. Tears rolled slowly down his cheek as he realized what must have happened. The sides of the trench rose once more in front of his vision…

War, it has always been one of the most constant things the human race has ever indulged in. We eat, we breathe, we breed like flies, and we fight. It may be for a God that we believe to be better or more relevant than our neighbours belief system. Often for their land and possessions, the allure of shiny rocks and natural resources that don’t exist where we are or we have used up our quota.Taking things from others or subjecting them to our will by force, humanity revels in it. We invented the sharp stick before the wheel, learned how a rock could cave in a skull, and what the value of fear and destruction could reap way before we ever decided that communicating could make things a lot easier. War has always been there, and unfortunately may well always remain a constant shadow lurking in the back of our minds. Many a band has addressed the issue on many an album, but as you will see, I do not think any has done so much to not only bring the lurking spectre back into our collective vision, or stir our memories of the tales my generation was told by our fathers or grandfathers, wives, grandmothers, uncles, aunties. Everyone that has lived through such hard times has a story to tell.

Death is the only possible outcome of any war, but that death may not just be the permanent kind. It also includes the death of the mind. The loss of compassion. The ending of family bonds, and the death of any sense of normality whatsoever. The death of cultural norms, the death of cultural identity. The loss of home and state, the death of religious freedom, and the ability to question that which we do not believe in. War has a price that cannot be counted in monetary terms, and although it is the biggest industry still to this day, its price is, and always will be, the loss of everything that humans first discovered when they became sentient. The will to live, the will to prosper and be happy, and not be scared of the dark of night that is being lit by a thousand shells raining upon you and yours.

Thus we give you the latest epic from a band that has named itself after the first year of the so called ‘War To End All Wars’. 1914, when the assassination of one man by another led to lines being drawn in the proverbial sand, and trench lines being dug deep, whilst the majority of Europe, and for that reason many other countries, pledged their age old allegiances and got down to killing each other on a scale never before witnessed by any living being. Sixteen odd million people would die as a direct result, and then far more than that number would die thereafter due to the spread of one of the biggest influenza outbreaks planet Earth has ever endured. It not only changed the history of mankind, but also led to more conflict later on due to so much instability remaining afterwards.

Many bands, as stated, over the history of the Heavy Metal scene have delved into the subject matter, from Black Sabbath and Iron Maiden to the heavier ones like Bolt Thrower, Just Before Dawn and Hail of Bullets to name a mere few, and it also crosses all of the associated genres inherent in our scene. Black, Death, Trash, Traditional, Viking, you name one, and it has its fair share of songs, if not albums dedicated to the folly of mankind and his warlike ways. I have to say though, at least to me, never has a band immersed itself so much in the actual day by day facts, the large battles to the small, run of the mill that most people wouldn’t even have a clue about. 1914, true to their very name, take every aspect of the heroism, the tragedy, the mud, the blood, and the suffering, and deliver it like no other.

I first stumbled across them upon the finding of 2015’s superb “Eschatology of War”, and was instantly mesmerized by their mix of both brick shit heavy Death Metal and the icy cold sharpness of Black, both styles being used without fear or favor to deliver the horror and the almost unintelligible suffering that people endured during that bleak, dark period of history. Other elements are thrown in as they see fit, so maybe just Extreme is a better tag if one must be given, as befitting the extreme devastation this one event would wreak upon the planet and its inhabitants. Other releases were then sought, including the excellent split with Minenwerfer “Ich hatt einen Kameraden” (On which both bands excel themselves), and also “Fur Kaiser, Volk und Vaterland!”, a collection of demo material and even a surprisingly good cover of Nirvana’s “Something in the Way”. Yes, it’s not at all what you think. All of this material is now available on a more recent release, “FKVV. Complete Discography”, which I urge you to get.

I am not going to break “The Blind Leading The Blind” down into piecemeal sections for you to analyze, as this would be doing this album a grave misjustice. As with “Eschatology”, one must simply start at the beginning and let the atmosphere wash over you in waves of the music and the people of the times followed by the utter despair and the sound of chaos and destruction. From each pleasant little ditty written to inspire the soldiers in their trenches and loved ones back home, to the thunderous sound of these Ukranian boys bringing the history back before our very ears, this is simply one album that every Metal fan must have, and I cannot emphasise this enough.

Recommendation – None is needed. This album speaks for itself in words and sounds stronger than almost all before it on this subject matter.