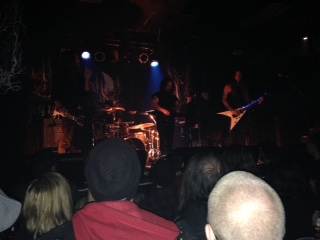 A little over a week ago, I had the opportunity to check another band off my must-see bucket list, and it was a big one.  The show was big enough, in fact, that I drove 7 hours to see it (though it helps that I was able to spend the weekend with my brother and his family nearby).  First, a little history of my music listening habits.  I remember listening to Twisted Sister and Helix as far back as 7 or 8 years old.  I went through the years of glam metal and on into thrash metal, but then I went for years exploring other musical scenes.  I’ve always been a music fan more than someone loyal to a certain genre and spent the last couple of years of high school as well as college listening to other things.  I did go to a metal show here and there…it never went away for me completely…but I wasn’t digging into metal the way I had in the past.  Ultimately, though I did catch the beginnings of thrash, I really missed whole waves of extreme metal.  When I re-discovered metal about 8 years ago, I did a bunch of reading (listening too, of course).  Notably, I read about the second wave of black metal and thought it something that I wanted no part of.  I’ve always been more political than anti-religious in terms of how I like my musical themes.  All of this is just to say that Wolves in the Throne Room is really the first black metal band of any type that I ever listened too.  So basically, it’s their fault that black metal has become my favorite metal sub genre.  I just couldn’t pass up the opportunity to catch them live.

After spending most of Saturday with old friends and family (I went to high school less than two hours from the venue and much of my family and high school friend group still lives in the area), we arrived at Lee’s Palace shortly before doors.  The line was already 50-75 people long up to the very nondescript looking entrance.  The interior was dark and dim, obviously well used, and very fitting for a metal show.  The room reminded me a bit of the Pyramid Scheme due to raised platforms on three sides, though it was at least twice as big.  The stage itself was very tall, almost five and a half feet, which is too tall in my opinion.  To me, it takes away from the intimacy of a performance, though I guess it gives better sight lines.  The bar and merch area were opposite the stage.  All in all, a decent set-up.

Up first was Michigan’s own grindcore inferno Cloud Rat.  They performed a blazing set, as always, but I did feel that the height of the stage was a detriment.  This was my fifth time seeing the band and my two least favorite of the performances were this one and a show they played at The Pyramid Scheme (though I love that venue).  In both cases, they were up on a higher stage.  They still shred, but there is a different, more visceral feel to there set when Madison can physically grab someone and toss him into someone else to start the moshpit (which I actually saw her do one time).  Rorik was kind enough to send me their set list so I’ll post that below for anyone interested.  It includes Nyx, a new song.  Though the crowd seemed to be there primarily for WITTR, Cloud Rat was still able to get things moving.  A pit even opened up for about half their set.  If you haven’t had a chance to catch them live yet, they are a must see.

After the mandatory change over time, Wolves in the Throne Room started into their set.  I believe their set consisted of Diadem of 12 Stars played through in order.  Before they began playing, at least two of the band members took some time to smudge the stage, which they also did at multiple points through the set.  Though the project is really two brothers, Nathan and Aaron Weaver, they were touring with a five member band consisting of three guitars, keyboards, and drums.  Their set was mesmeric and intense, though, aside from a smoke machine, not showy.  I wonder sometimes how the atmospheric type of metal will play at a show.  I’ve been to some that really don’t work.  This one did.  WITTR drew fully into the dark melancholy of their world, even more than listening on the album.  Those around me must have agreed as there were a lot of gently (and not so gently) banging heads throughout the set.

In the final analysis, I’m really glad I went to this one, though it essentially meant a 14 hour road trip.  Cloud Rat is always amazing and Wolves in the Throne Room was near transcendental.  Take the time to check out their recorded work and if you have an opportunity to see them live, go!  Don’t hesitate.