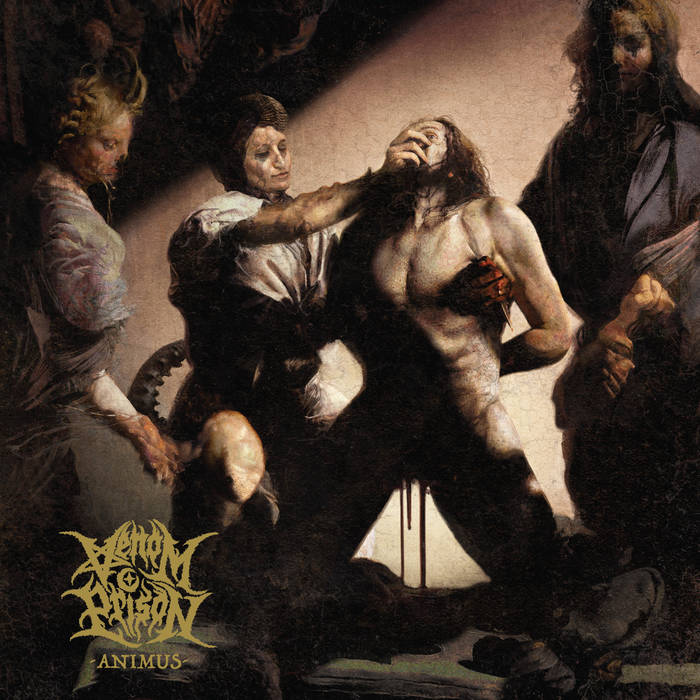 Let’s take a journey in the ‘way-back’ machine. Animus came out a year and half ago, but I only just discovered it, so I’m going to review it anyway. It’s that good! Venom Prison takes crusty old-school death metal and pairs it with absolutely vicious female vocals to create the soundtrack of a feminist war machine. I’m here ready to re-supply said war machine as necessary!

Before we get to the music, however, I want to start with a frank discussion about album covers. Certain styles of metal, with brutal death metal being a very noticeable culprit, have a real problem with misogynistic album art. Yeah, I know…metal is meant to be confrontational. There shouldn’t be any off limit topics.  Blah, blah, blah… I’ve got news for you. Being a misogynistic asshole is not confrontational. It’s pretty normalized, though somewhat behind the scenes, in mainstream society throughout the western world. Studies are showing that porn is getting more violent and aggressive towards women. This is a serious issue. Really. These album covers are not opposing anything in society.

All of which brings us to the cover of Animus. Take a good look. Go ahead. The image is of three women cutting off the genitalia of a male prisoner. Before you freak out, I’m not suggesting this is an acceptable thing to do in real life. I don’t think the band is either. It is truly confrontational however. The band has flipped the script on sexual violence by perpetrating violence on a man’s sexual organs. It is my hope that the brutality of this image can lead to some soul searching in the scene. What really is acceptable? What is truly confrontational? What is actually just reinforcing society’s norms?

Onto the music! Waves of chaotic riffs crash through your cerebellum supported by crushing bass lines on top of nightmarish drum rhythms. The Valkyries of old scream their war cries above it all! Who are the perpetrators of this madness you ask? Jay Pipprell is the mad conductor behind the drum kit. Upon his percussive sorcery, Mike Jefferies lays down thick bass lines that hit like a concrete block in the belly. Ben Thomas and Ash Gray are the dual riff snipers in this war of attrition, with Larissa Stupar howling fury above the lot. War is delared!

Seriously, beyond all of the discussion above (that I know some of you won’t like), this is an album worth hearing. Old school roots with passionate fury and layers of dissonance. Now doesn’t that sound worth a listen?