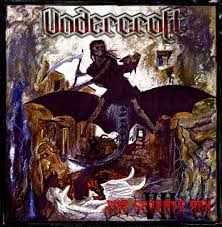 Undercroft. Sounds like the sort of place where you would hide a body or something doesn’t it. Apparently this band has been hiding something from us for a long time anyway, since about the early nineties to be precise. This is their seventh full length album, and what, if anything have we heard about them?

Location and distance from other cultures can make life murder for us Metalheads, be it from the fact that we only find bands through word of mouth like in the old days of cassette trading or the fact that we simply do not look outside of our own comfort zones. If it’s not widely shared or the hottest new thing it will often be overlooked or unappreciated.

I had no idea who they were until recommended to me by a friend, and after the first little taste I thought exactly what you will think. Man, this band sound so much like Sepultura it’s not funny. Must be the accent. Maybe it’s the delivery as well. Shit that next song sounds like Nailbomb, bugger it I really don’t have the time for this.

I think I pretty much told said friend that I wasn’t really keen on this, and then I felt a bit shit about it and went back and had another listen. Mmm those riffs are actually rather killer, razor sharp and shit. Maybe I will hang around a bit longer.

The intro on the second song had my toe tapping, then cometh the Guitar attack, and just as quickly as you can hide a body or your collection of ABBA albums when your Metal mates are coming around, I was reminded of just why I listen to Metal.

Power and energy. Riffs that cut like the harshest of words creep under your skin even though you try to maintain that facade of the staunch motherfucker you want to be. Drums and bass both invading your personal sense of well being. The vocals challenging you to dislike this effort or just fuck clean off.

Have a listen to ‘Sing the Die Song’ and see if I’m wrong. If the pounding drums of ‘El Condenado’  don’t inspire you, then the slow burn of ‘The Hand that Turns The Wheel’ will surely make you think twice.

This is Death crossed with Thrash crossed with Awesome. In Chile, these guys are highly respected, and it is not hard to see why. Heck they are probably Gods around that region. Even though they eventually pulled the proverbial pin and moved elsewhere, you can rest assured their legions of fans would have stayed loyal.

Recommendation –  Go hide your Engelbert Humperdinck albums in the cellar, this will make your Metal Mates much happier.