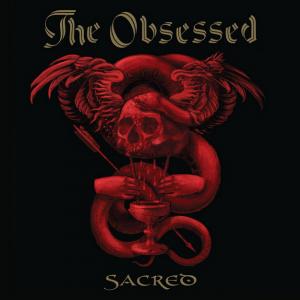 Originally, formed in Maryland in the late 70’s under the name Warhorse, led by Scott “Wino” Weinrich, The Obsessed are nothing less than doom metal Godfathers. Also, with hints of punk and thrash, these guys were sure to leave their mark. They released a couple demos and played a handful of gigs before splitting in 1986. After reforming years later, they release 3 more albums, the last one being 1994’s “The Church Within”, before eventually making the split again around 95. After a few years, the band would reunite for a couple shows in 2012 and 2013, including, Hellfest Open Air and Maryland Deathfest twice.

After many lineup changes, they’ve found their groove again, and Wino announced his full time return to the band in March of 2016. Now, they’re looking to release the bands first album in over 20 years. “Sacred” shows a renewed energy and purpose to refuel the band this time around. Led by Wino’s iconic vocals, they’ve found their center groove in an incredibly solid three-piece. Right from the beginning this album proves to be well worth the wait. Proving to have the same intense spirit they had in the past, showing off bits of thrash, doom, stoner groove, blues, and can be very punky at times as well. All in all, just a heavy, old school, meaner version of their younger selves. They’re showing they can be heavier and more relevant than they’ve ever been before. It’s a sick culmination of all they’ve done both separately and back together. Chunky, doomy and very bluesy riffs lead the way with soulful solos to follow. And lyrics about relatable and real life experiences. Wino speaks a beautiful message to his children in “My Daughter, My Sons.” And my personal favorite “Stranger Things” speaks of the obscurities in life. These legends prove to live again, in what I believe to be their best record to be released yet!

Recommendation: If you like old school metal this album is for you hands down.

Phone Interview with Wino of The Obsessed 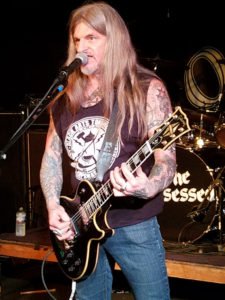 We have Wino here, promoting the first album in 20 years from The Obsessed, “Sacred”, coming out April 7th through Relapse.

DD: How’s it going with the tour?

Wino: We start the tour on the 12th of April.

DD: And, you have plans to stay with The Obsessed a while, and  another album to look forward to?

DD: Oh, that’s excellent. Do you have any plans on releasing any more solo material?

Wino: Well, probably not, because my main focus right now is on The Obsessed. And we got a lot on our plate. The self-titled Obsessed record  from back in the day is gonna be re-released soon too, on Relapse. So, I’ve got quite a bit on my plate right now, I’m writing some acoustic stuff, and i’ll probably do another acoustic record at some point, but it probably won’t be for another year.

DD: I actually saw you at the Black Label show when you opened up for them on the Unblackened tour.  It was unbelievable.

DD: What does the name “The Obsessed” mean to you??

Wino: Well, The Obsessed, it really means to me, passion, inspiration, maybe a little bit of…to quote your name…derangement…

DD: And could you say that’s the overall message of the band?

Wino: Well, the overall message of the band, even though we’re called a “Doom” band, I like to have a hope message there.  Some of the themes are dark for sure, but overall, I’m more of a “the glass is half full’ kind of guy. I kinda believe I gotta carry the torch, and I think the best way to do that is with a little bit of a positive outlook, ya know?

Wino: I think so

DD: So, what is your biggest non-musical influence?

DD:  Yeah, it can send you in all different directions…

Wino: That’s right. And probably, if I had to break it down further, I’d say love, substance, and life experience.

DD:  That’s a good message.  What would you say your biggest goal as a musician is?

DD: Where do you think you get the best response other than home?

Wino: Definitely Europe, I’d probably have to say Germany, I think the German fans have been very, very appreciative. But the United States is really coming along, and that’s why we’re gonna concentrate heavy touring in the U.S. first, because this is our country and our people deserve it.

DD: Definitely, and you got that Berserker coming up in Pontiac also?

Wino: Yep, and that looks like is gonna be a pretty strong lineup. We’re also gonna be doing some shows on the April tour, actually supporting Weedeater, with Primitive Man, Lo-Pan and Karma to Burn, so that should be pretty interesting too. Weedeater is a great band and I think that’s a killer bill. All those bands/  That’s a pretty fuckin good bill, hahaha.

DD: Yeah, that sounds badass!  So, of all the bands you’ve already opened for, who haven’t you played with that you would love to open for, past or present?

DD: What would you say your personal favorite song on this album is?  What means the most to you?

Wino: I really like “My Daughter, My Sons”, because it’s a message to my children, so that is really a very personal tune. But, I’d have to say I really like “Be the Night” too, because i think it’s kind of an aggressive punky one. “Sodden Jackal” was our very first single recorded in the 80’s and it was just recorded so shitty.  I knew we had to re-record that one to do it some justice.

DD: Describe a day in the life of Wino…

Wino:  These days it’s relatively mellow. Basically, I wake up, I take my herbal. I’m very into like herbal stuff. I work out. I paint for an hour maybe two hours, then I’ll play guitar for about an hour hopefully twice a day, then midday I try to go out on my motorcycle, getting my Harley ready for spring time. Then I’ll probably get side tracked into doing some more art. I paint on anything, and I’m working on sculptures, when I’m out there working on my bike and I’m fabricating a piece of metal or something I might then back to my sculpture.  You never know haha. Then, we rehearse in the evening. And, I’ll do my research, which I study herbal medicine and my newest hobby is American gunslingers,outlaws, wild west stuff, doing some research on that too, hahaha.

Wino: I try, you know. If you don’t stay busy you know what happens man, you end up getting in trouble haha.

DD: That’s definitely true. So, tell me how it feels, after everything you’ve done, to be back with The Obsessed and ready to hit the road again?

Wino: I feel very inspired actually, we have the right chemistry now, we went through a couple line up changes after the record. But we landed on another three-piece with Me, Brian Constantino, and Reed. And I feel very inspired man, the chemistry is right and I’m totally psyched. I feel very re-energized. In the past, I’ve done Obsessed reunions and it never really felt right, but, right now it does and I feel totally energized and ready to hit the road.

DD: I’ve got two fan questions for ya…can you tell me anything about working anonymously with The Mentors?

Wino: Okay, I can, hahaha.  You know that being identified in The Mentors could be trouble. This is a long time ago though, at the time it was in 1987 I believe.  It was The Mentors first world tour, or first United States tour. Saint Vitus was traveling with them. And they were just completely fuckin insane, and I mean completely insane. When their guitar player went missing with this gorgeous stripper somewhere down in Florida. I suspect some drugs were involved. Then I was asked to step into the bass position while “Papa Sneaky Spermshooter” AKA Ed Dankey moved into the guitar position, so I had a crash course on the songs. I probably learned like 3 songs a day. I did 2 shows if I remember correctly, and man I totally buttoned it up dude. I put on my hood, I changed my shirt, long sleeve, covered the tattoos, I had fingerless gloves to cover tattoos  My nickname was Sir Lord Cunnilingus. Hahaha. I made more money on those two shows than I did the entire tour with Saint Vitus. On one of those shows actually, we played in Iowa at this arboretum, the singer of Saint Vitus and I walk in there and met the promoter, this little kid named Corey. I looked around and said “There’s the PA speakers, where’s the amps for the PA and he mics and stuff?” He looked a bit shocked, and was like, “Wow, I didn’t realize we needed that stuff”, and he went off to get it. And that turned out to end up being the singer for…..uhhhh what’s that band that has the clown playing drums?

Wino: Yeah, Slipknot, he was that promoter, this young kid. I think it might have been one of his first shows, but he treated us real good. It was cool. It was pretty funny.

Wino: Not on that track.  Here’s what happened with Probots.  My song “The Emerald Law”, I sang played guitar and wrote the words, and David was there when I recorded my tracks. They had tracks for the whole thing already laid out. When David called me and asked if i wanted to write words and a concept for this tune, he played me the basic track. I met him in DC. I met him there at Inner Ear, and just laid out my parts. Now, when we did the Lemmy video, that was already completely recorded. All I did was play air guitar. Basically, they just wanted me to beat that guitar, which I did. But, I met Lemmy before. He was a very nice guy, and even thought that we were sinking on the Shake Your Blood set. He was still really fun. He was a great guy. He was amazing. He was one of the smartest people I’ve ever met. He was also probably the funniest person I’ve ever met. He had a very wry, English sense of humor, but very intelligent. He wasn’t about putting people down. He would engage you if you engaged him. He was a great guy that’s all I can say. He’s sorely missed..

DD: On my end too, I can agree. Where is the best place to find info/merch and anything else that we would want to find on The Obsessed and Wino?

Wino: Probably the best place is theobsessedofficial.com. That’s our official website, and on that site you will find all of our merchandise. You also find my personal blog, and also my artwork for sale.

DD: Is there anything you’d like to say as a final message before we wrap up?

WIno: First of all, great interview. I really liked your questions, so thank you. I’m really looking forward to touring the U.S. and the world. And all I can say is thank you very much to everyone that believes, and we’ll see you on the road.

DD: I think I can speak for all the fans in saying we look forward to seeing you kick ass out there and seeing The Obsessed back.

WIno: Well, thank you very much I appreciate it.

Wino: You too, brother.