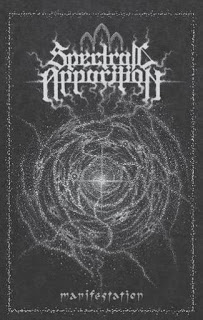 Manifestation is the first release from new-ish UK band Spectral Apparition. Though the project has been creating since 2015, this twenty minute, three track release is their first recorded output.  In my humble opinion, these three tracks were well worth the wait.  Recorded and produced by Greg Chandler (who has also captured the madness of Lychgate), we are presented swirling insanity.

The band uses down-tuned guitars and bass, as well as guttural roars, to create a foundation of pummeling oblivion on par with any of the best mid-paced death metal around.  To this, they add tremolo riffing and the shrieks of an unhinged soul, giving just enough blackening to call forth the torment of the damned.  The second track is especially engaging (though all three are quite good).  Early on the singer yells to the heavens, (or more likely the realms of hell) “Corpselight, illuminate me!”  From there, the track takes you on an edge of your seat, nail biting ride through the darkest depths of your soul.

Recommendation:  Someday, you’ll be able to say you were one of the few who knew about this project when it was still completely underground.  This level of quality won’t stay there long.