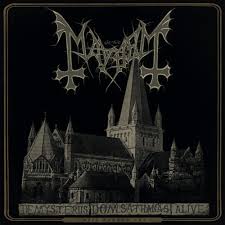 Love them or hate them, Mayhem are certainly one of the most controversial metal bands around.  Though their past is rife with violence, murder, suicide, Nazism, and more, they are undoubtedly one of the creators of the sound we now call black metal.  The band is touring in the new year in the United States and Canada with the promise to play the seminal De Mysteriis Dom Sathanas in full.  In addition, they are independently releasing a live recording of the album from last year’s performance at the Black Christmas Festival in Norrkoping, Sweden.  Here, from that recording, is Life Eternal.