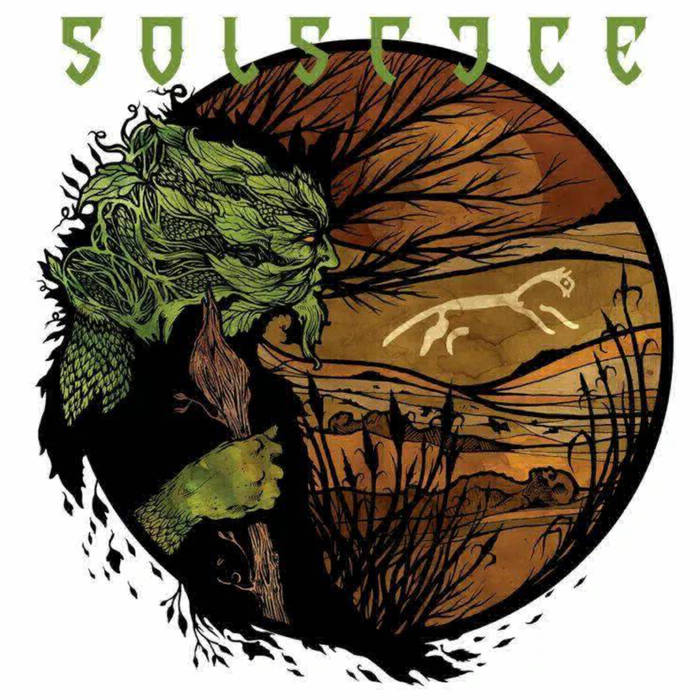 Despite almost a 30-year career, England’s Solstice have not quite managed to put themselves in the very front of the doom metal scene. The problems with line-ups, a sound that defies stereotypical approach and huge gaps between releases must’ve had their say, but then again – maybe they are still to release “that important album” on their careers as well. Whereas the debut “Lamentations” (1994) moaned in the realms of British doom (with both the sound and the riffs), following album “New Dark Age” (1998) added a hefty amount of folklore in the mix, making Solstice stand apart from your regular doom metal unit with their occasional nods towards almost Bathory-like soundscapes. Around 2002 Solstice went awol, making us wait for the third full-length album for 20 long years. During their time of absence Solstice did become a cult classic within doom fans around the globe. A well kept secret and a band for the ones truly dedicated. Several smaller releases and occasional live performances kept the hunger alive and even added to their myth, but the big question was will they ever release an album again. As the news of a new Solstice album finally crept out, the expectations became great. Almost unfair even.

After the very first spins it becomes clear that the much anticipated White Horse Hill is not letting us down. Not by any means. First thing to catch your interest is the much improved sound, which allows the epic qualities of their music reach even greater heights. This, matched up with dynamic and well-written material makes White Horse Hill an easy album to like. The heavy and epic tunes like “To Sol a Thane”, title track “White Horse Hill” or “Under Waves Lie Our Dead” are as powerful and as they are carefully written. Their slow, archaic thunder is matched up with more ballad-like compositions, collocated in between the heavier ones. A lot like the classic Black Sabbath interludes used to be. And just like with mighty Sabbath, these pieces become crucial for the album’s concept. Calling them fillers would be an understatement. Actually, “For All Days, And For None” – one of the more mellow tunes on the album –  is my personal highlight of the whole release.

Each of the Solstice albums has relied on the guitar work of Richard Walker and much like Greg Mackintosh of their countrymen Paradise Lost, it is his sound and approach that more or less defines everything in Solstice’s music. Yet on White Horse Hill their current vocalist Paul Kearns steps up and balances out the record when compared to the earlier releases. His performance on White Horse Hill is nothing short of marvellous and through his personal input the guitar is maybe a bit less dominant and the album maybe a bit more easier to access.

So, the big question is will White Horse Hill live up to the  massive expectations? The answer is maybe a case of a bit both – yes and no. It certainly is not a  revelation-like album that will change the face of music, or the doom scene even. Then again, it is an highly enjoyable compilation of good old heavy metal and doom, with a hefty dose of folklore. It should appeal as much to fans of viking era Bathory or classic Candlemass both. It is exactly what people can expect from Solstice in 2018. In a way, maybe even a bit too much so,White Horse Hill will not surprise anybody with it’s delivery, but it will most certainly deliver the goods with improved quality and their unmistakable barbaric finesse.

Recommendation: White Horse Hill is their best recorded work, and that alone is a worthy enough reason for a comeback.