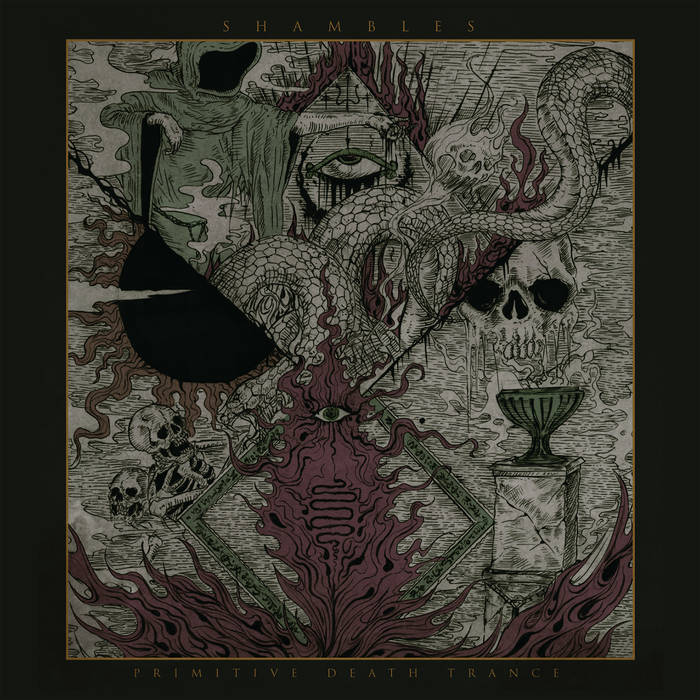 I feel confident in assuming Shambles are probably fans of Incantation and Portal, in that there is an archaic feeling of crushing despair as one might find throughout any given Incantation release, while there are enough moments that bring flashbacks to living nightmares I’ve had while driving through winding back roads during pitch black lonely nights in heavy rainstorms listening to Seepia.  Indeed the influences here may be apparent, but that’s not to say Shambles doesn’t stand on their own.  In fact, I’d yet to hear a good combination of these two styles – which although similar, are also quite different in their own unique way.  Hearing them writhe in agony as a singular entity brings a whole new element of suspense which was until now unknown to me.

At least one time (although multiple times recommended), you should experience this album with the stereo turned up (or headphones if you prefer), with all the lights off (preferably at night for full effect), sit/stand in one place (whichever you find most comfortable), close your eyes, clear your mind and simply absorb what you hear.  Let it guide you, and don’t let your mind wander.  Don’t try to figure out the music, or think about it; simply let it wash over you.  This is one of my favorite techniques for truly understanding an album like this.  I personally think it’s necessary to familiarize yourself with music that goes for a particular atmosphere over technical mastery, but here’s what’s neat about this particular album – the feeling it evokes hit the title right on the head.

Truly I felt as if I was put in a “Primitive Death Trance”.  Allow me to explicate what I mean by that: the music has a very dark and cavernous sound to it, setting the stage well for a primitive feeling.  The descent into madness brought on by the dreadful atmosphere brings a feeling reminiscent of how we might feel when seriously contemplating death; while connecting ourselves as a whole to what we’re hearing – to truly understand it – guides the hypnotic trance.  Perhaps this is simply the power of suggestion, but if so, I am definitely okay with that.  It’s an interesting feeling and I think it’s important to become as attached as possible to what you’re listening to. There isn’t much point to music if we’re simply hearing it in the background because we don’t like silence, now is there?

This is a splendid album for exploring hallucinatory jaunts with the self.  The biggest selling point here is that the atmosphere remains drearily consistent.  I hope to see Shambles continue to build on the foundation they’ve laid out here.  They not only did a great job of delivering an album which lives up nicely to its title, but also lives up exceptionally well to their name.  Be prepared to have your life left in Shambles!