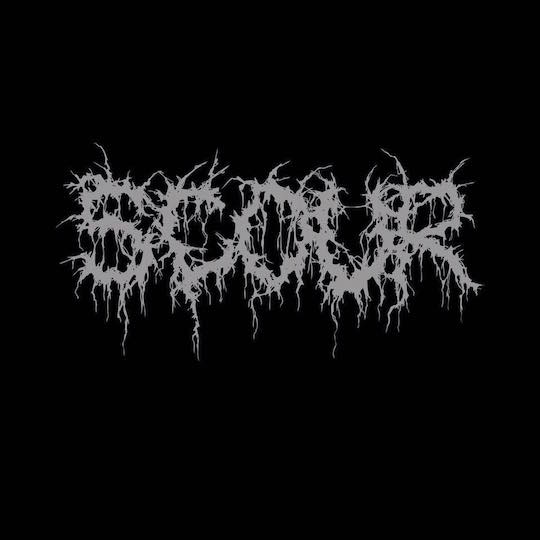 I’m sure you’ve all seen the details in other places, but Scour is a new metal ‘supergroup,’ or at least ‘super-project.’  The band features Derek Engemann (Cattle Decapitation), John Jarvis (Pig Destroyer), Chase Fraser (Animosity), Jesse Schobel (Strong Intention), and lastly, Phil Anselmo (Pantera/Down/many others).  The story goes that Derek and John got talking in a bar.  Chase was also present.  They decided to turn some material Derek had been working on into a side project.  They invited Jesse and Phil to join the fold.  The rest, as they say, is (soon to be) history.  I’ll let my interview with Derek (below) fill in more details while I answer the most important question of all:  Is it any good?

The short answer is yes, the self-titled Scour EP is musically strong.  It sounds nothing like any of the other projects in which these particular people participate, except in the loosest sense.  Scour is essentially a USBM project with thrash, grind, and death influences.  The guitar work is suitably chaotic (similar to Pig Destroyer and Cattle Decapitation in that sense) though much more black metal stylistically.  Phil’s vocal style is mostly closer to a death metal growl, or even more like his own shouting style, than it is like any black metal, but it works with the wall of sound the others have created.  The short EP gives the sense of a relentless, many clawed demon screaming across the landscape for the sole purpose of rending flesh from bone.  The composition and tight, yet chaotic playing won’t let you go from start to finish.

This is the point in the review where I was planning to type up the transcript of my interview with Derek.  Unfortunately, the app which was supposed to record the call malfunctioned and I am left with only one useable minute of the interview (the first minute).  I’m pretty frustrated about it.  I thought it was a good interview.  Using the questions I had written up for the purpose of the interview, I’ll try to fill in as much as I remember of his answers.

My first question had to do with the formation of the project.  Derek was able to go into some more detail as to how it all started. Basically, he had been writing some material which didn’t fit with Cattle Decapitation and thought it would be cool to get a side project together to play this music.  He was talking to John Jarvis about it prior to the above mentioned night in a bar and John was definitely on board.  When they got talking about it again that evening, they were able to easily get Chase involved too.  Next they had to find a singer and a drummer.  After kicking the idea around for awhile, they decided they’d like to bring Phil Anselmo into the project as the vocalist. Phil was eager right away.  Finally, for a drummer, they approached Derek’s old friend Jesse Schobel and Scour was complete.

In terms of songwriting, the tracks all stayed pretty much the way Derek wrote them.  He wrote all of the guitar and bass parts (I believe he said with the exception of a couple of solos).  He also wrote the basic drum patterns which Jesse filled out for the complete drum parts.  Phil wrote all the vocals after getting the completed (except for vocals) tracks.  He then recorded them himself to be sent back.  Apparently much of the album was recorded by sending music back and forth digitally, but also a good chunk was recorded while Pig Destroyer was on tour (with Derek managing the tour).  Derek says that they would ‘scour’ the venue (not sure if he intended the pun) to find quiet places to do some recording.

In terms of influences for Derek, he talked more about wanting a particular buzz saw sound in the album with lots of blasting and chaotic noise.  He did namecheck (hopefully I’m remembering correctly here) Dark Funeral and Belthagor as specific musical influences for what he was looking for.  He jumps from bass to guitar on this project, but says (even though he’s more comfortable playing bass) he does all of his writing on guitar.

Up next for Scour will hopefully be some as yet unconfirmed and un-named festival appearances during which audiences would hear the material from the EP, but also some new songs they have been working on.  I had wondered if this would be a one and done type of project, but Derek assured me that not was it the plan to produce more music, they already have several things written.  He didn’t give me much in the way of specific detail, but did say they are evolving and growing musically within the confines of Scour.

Derek also opened up about the controversy Phil Anselmo has faced in recent months.  He and John were at the show where Phil gave the nazi salute to the shock of just about everyone present.  He said that they were definitely shocked themselves, that they’ve known Phil for a long time, and that doesn’t represent his ideology.  In his opinion, Phil’s apology was sincere and the whole thing was the product of too much alcohol leading to terrible choices.  Interestingly, the Scour project was delayed to allow the furor over the incident die down.  According to Derek, the project was pretty complete as far back as February.

Recommendation:  Scour is a really musically solid release.  Given my pretty openly leftist political leanings, I approached it with some trepidation after the Phil controversy.  I feel better about it after talking to Derek.  Not only is he a part of a pretty politically left band, he was open about talking about the situation and seemed sincere in his belief that this incident wasn’t really who Phil Anselmo is. I guess time will tell, but the music is certainly worth a listen.