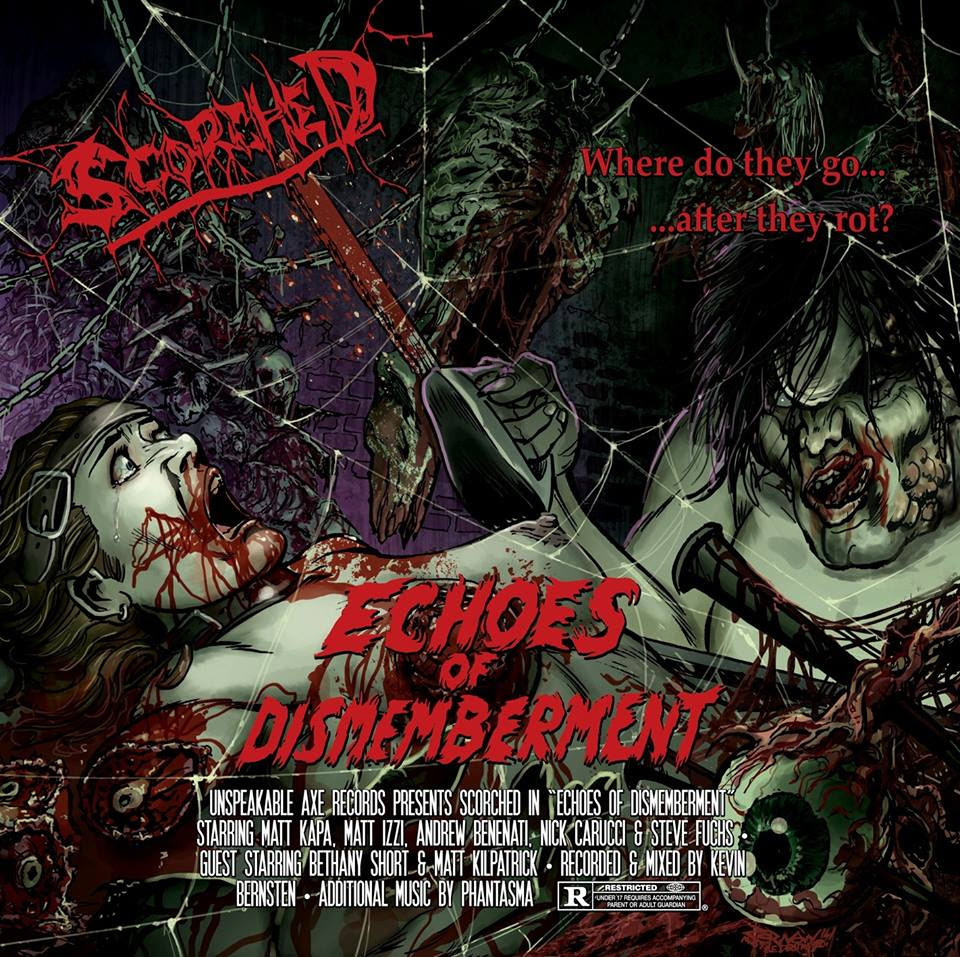 Delaware’s Scorched have been lurking in the shadows for a few years now, emerging every so often to unleash a few tracks at a time on a demo or split EP.  They are finally ready to spew forth a proper full-length album’s worth of eerie, horror-themed death metal. The album kicks off with some creepy synthwave sounds to get your hair standing on end before the opening riff of “Torture Prolonged” pulls you into the Scorched House of Horrors.  Filthy, mid-paced riffs drag you into the putrid smelling kitchen as dive-bombing guitar leads fly past your head like possessed utensils.  You manage to break free and hide in the bathroom, but you hear the blast-beats banging on the door right away.

The chainsaw-wielding guitars of “Craving Human Remnants” now start to cut through the door.  You hide in the rust-stained tub with hope of getting out alive fading.  The d-beat riffs crash through the door and begin to scan the room.  You are easily discovered by the Hanneman-inspired solos as they blow open the moldy shower curtain.  The tremolo/chugged riff trade-off raises up to strike, but when the chainsaw riffs swing down at you, they are snagged by the old shower curtain, giving you the split second needed to jump from the tub and run up the dusty stairs.

The opening riffs to “Dealings of a Gruesome Kind” seem to take their time clomping up the stairs with the realization that killing you may be more of a challenge than they thought.  This pleases the riffs as they reach the top of the stairs and repeatedly call out “where are you?” You can’t hide your hurried breaths and the music explodes into the room and starts chasing you around the bed with lamps and furniture crashing all around.  You are again captured and wrestled back down the stairs and into the basement where the torture is to begin…

Okay, I don’t want to give away the whole story, but I think you get the idea.  Scorched takes the Autopsy blueprint of death metal and builds off that foundation to make an album that is not a mere imitation.  What sets Echoes of Dismemberment apart are the interesting and memorable riffs.  They don’t rely solely on the guitar tone to be heavy, although it crushes.  There are plenty of hooks in the guitar playing while it morphs between lumbering doom sections and rapid-fire alternate picking.  The lead playing is just as varied with blues, whammy and shred stylings.  The vocals are guttural and drenched in reverb, but lyrics are discernable if you listen closely.  The rhythm section does a fine job at keeping the tempos moving throughout each song.  You never think, “this song sounds just like the last three.”  Overall, this is an excellent death metal album worthy of repeat listens.