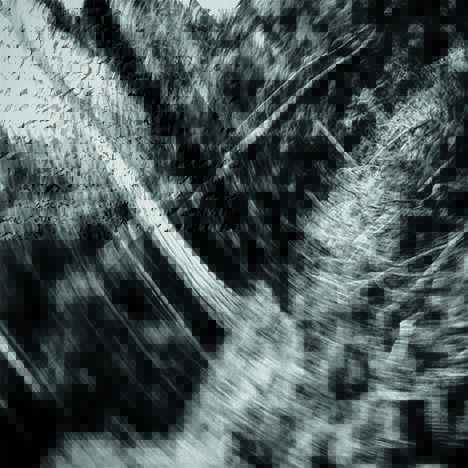 As a form of serious artistic expression exploring the yang of the inner mind and universe, black metal is a mental and physical representation of darker cosmic forces at play. When black metal is on the apex, it has the capacity to engulf a listener into a trance, connecting them to a spiritual nature far beyond sensory experience.  Black metal band Thantifaxath explore further these possibilities of black metal, cloaking themselves to remain acutely dedicated to sound over visual aesthetic. Their music serves as a portal to something both bizarre and impenetrable which disorientates the listener consistently.

My first experience with Thantifaxath was with their notable debut full-length album – Sacred White Noise – an unsettling, atmospheric, severe and challenging passage into nausea-inducing disarray. However, despite its promise and near-excellence, there was something missing. Something slight, but something nonetheless.

Personally, I enjoy black metal that on first listen is intimidating, but in subsequent listens allows for a profound, introspective, captivating experience that not only stands menacingly as an authentic piece of art, but also envelops me – as a receiver of the band’s Message – as intricately caught up in the chaotic web of experience. Sacred White Noise had elements of this somewhat rare and essential Essence (particularly in how the album intimidates and envelopes), but Thantifaxath’s black vision of dismay and terror was not fully realised. This – for me at least – stopped it from being the masterpiece it had the potential to be.

I was always confident there would be more from Thantifaxath and hoped that certain areas of their chaotic song structures would be tightened without them losing their malevolent atmosphere and uniqueness. Cue this EP.

On Void Masquerading as Matter, the elements lacking from the previous full-length have been addressed and the dissonant atmosphere has been sewn together into a tightly-woven and deliberate tapestry of experimental black metal. This is to the credit of the musicianship and clear understanding of what the music needed to achieve once released to wary but curious listeners. Fundamental aspects of black metal manifest themselves though Thantifaxath who manage effectively to stir the listeners’ cognitive dissonance as it creates a simultaneous desire for shutting off the music and also turning it up. It’s terrifying – but the jewels that can be discovered in the guts of Void Masquerading as Matter make it worthwhile.

There are a host of experimental techniques on show on this EP. Thantifaxath utilizes bizarre timings, roller-coaster rhythms and maddening arpeggios akin to a sped-up carousel. The black pandemonium retains its authenticity due to the captivating drum-work which holds this EP’s scattered elements in place. The vocals are harsh, unrelenting and guttural which emerge – in the form of growls and hisses – from the distorted horror of the instrumentation. These vocals add a necessary amount of tension which allows the musical elements to blend together successfully. This EP bleeds dissonance into the listener’s ears but remains coherent and tangible enough to remain enjoyable. Each song on Void Masquerading as Matter is further controlled and pieced together by occasional string work, piano and acoustic guitar which, instead of offering respite and serenity, build the uncertainty of the atmosphere further.

Thantifaxath are on to something with this EP. They’ve honed the potential of their previous effort and mastered it, creating a sonically unique experience in a genre that – despite all the clichés and carbon copies of bands out there – keeps expanding into refreshing territory. Though it remains to be seen if Thantifaxath can achieve this further on a full-length effort, Void Masquerading as Matter is one of the best experimental black metal releases of the year and is worthy of repeat listens for its true depth to be exposed. The Sprit of black metal is beyond doubt still alive in 2017 and one of its ways of channelling itself is through this mysterious Canadian group.

Bio:  Nathan Hassall has an MA (Distinction) in Creative Writing from The University of Kent. He is the Editor of two literary magazines, Guttural and The Luxembourg Review. Hassall has been published or is forthcoming in various magazines including, Failed Haiku, Resounding Footsteps, Watershed Review, Episteme, cattails, Cat on a Leash Review, and Yellow Chair Review. His most recent chapbook, The Flesh and Mortar Prophecy, is available from Amazon.