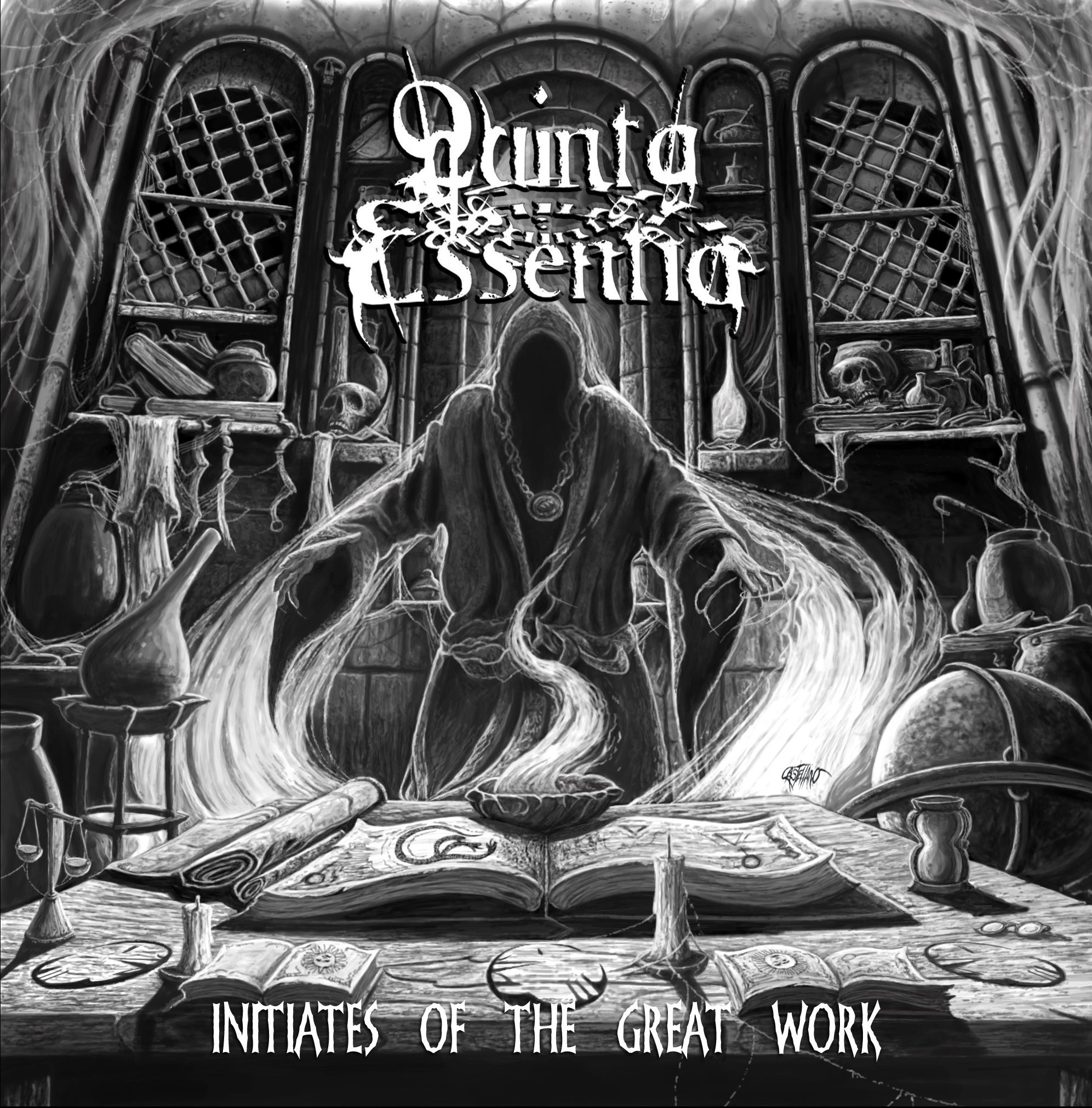 Album – Initiates of the Great Work

It’s hard to know where to start in writing about this album.  I guess the obvious place is genre.  Metal Archives has Quinta Essentia as Black/Death/Thrash metal, which I suppose is as good a description as any.  On Initiates of the Great Work, they are a veritable melting pot of metal sub-genres.  After listening to the album multiple times, this feels very much like a traditional heavy metal album which wears various genre traditions of death, black, thrash, and even speed metal to accentuate certain points of the album in certain ways.  Most noticeable are the death metal influences (especially in some of the vocals and percussion) and black metal influences (especially in some of the riffing).  Early on, I felt the album was a fairly straightforward slightly blackened death metal album, but then the guitars start noodling and soloing a little more and the vocals become clean periodically.  The pace varies, the riffing goes from pretty to ugly to pretty again, and the overall effect is that of a traditional heavy metal core.

So, the album must be terrible if it jumps around so much, right?  Wrong.  Quinta Essentia have done an excellent job of mixing all of these disparate parts without breaking the natural flow of the album.  There are some guitar solos (which generally detracts from extreme metal album, in my opinion), but they weren’t too much until about halfway through the seventh song.  Linear Articulation of Intent (the above noted song) is a roughly three minute instrumental track.  If you are going to allow masturbatory guitar solos on a metal album with extreme elements, that is about the only way it’s acceptable.  In fact, the guitar work of Jason Flippo and Matt Barnes is quite excellent.  With the one noted exception, solos are restrained enough to fit the pacing and atmosphere of the album.  And the riffs!  There is wave after wave of riffs at various points on the album, many of which (the start of Flight Without Form, for example) create veritable ear worms.  The bass lines (also Jason Flippo on the album) are solid without drawing attention.  The drumming done by Eric Gordon works between solid rock/heavy metal rhythms and more extreme death metal double bass.  With vocals, we are back to Flippo again.  Whether you consider his death growl or his clean singing, you find that his vocals are solid and sufficient to set the mood of the moment.

I always love an album which forces me into some involuntary reaction, especially an album that touches whichever part of my lizard brain causing headbanging.  Initiates in the Great Work is just such an album.  Quinta Essentia takes you on a joyride though the darker recesses of your brain by creating an inescapable mental atmosphere.  The album cover present a window into the dark, sorcerous realm I am transported to every time I listen to this album.  Like label-mates Abominant, they follow their own path to creating an unexpectedly good piece of music.

Recommendation:  You should really buy this one.  Yes, you!  In fact, you should go pre-order it right now.