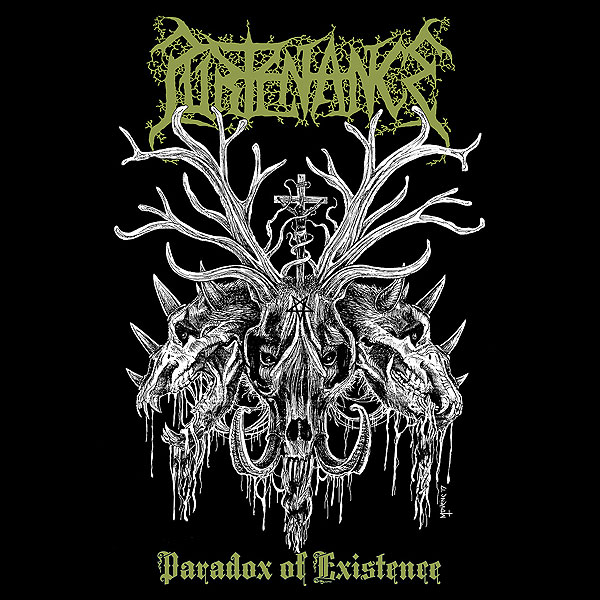 Purtenance, with two years and two demos under the name of Purtenance Avulsion, have been active (in an on-again, off-again sense) since 1989. Hailing from Finland, the band plays an old school style of death metal, not because they are trying to tap into a current trend, but because they actually are old school. The four track EP Paradox of Existence acts like quicksand. The sounds draw you ever further down into darkness and your inevitable demise, but they take their time doing so. There is no need for them to rush, as there is no way for you to escape.

The current line-up is a quintet, consisting of Juha Ranniko on guitars, Harri Salo on drums, Ville Koskela on vocals, Simo Rouvinen on guitars, and Tero Aalto on bass, with only Salo and Ranniko going all the way back to the Purtenance Avulsion days. The sound here is thick and heavy, like a swirling morass of polluted air settling over you, choking your breath from you, and blinding you to your surroundings. Percussion is fantastic. The maniacal blasts are there, but not always. Salo uses a dynamic range of styles to move the listener through the various brutal moods of the album. There are riffs galore from Ranniko and Rouvinen, all of them downtuned monsters that are decidedly ugly and evil. Aalto’s bass gives the sound a thickness that would take a chainsaw to cut through. Koskela uses a drier sounding death growl than many vocalists in the style, but it remains darkly vicious.

Back after two years, and seemingly on the rise again, Purtenance provide a clinic on meat and potatoes death metal. No frills. Not a ton of technicality. No extra broot because it’s what the cool kids are doing. Just dark, menacing death metal that hits you like a meat tenderizer.

Recommendation:  When I recommend death metal, it must be good.