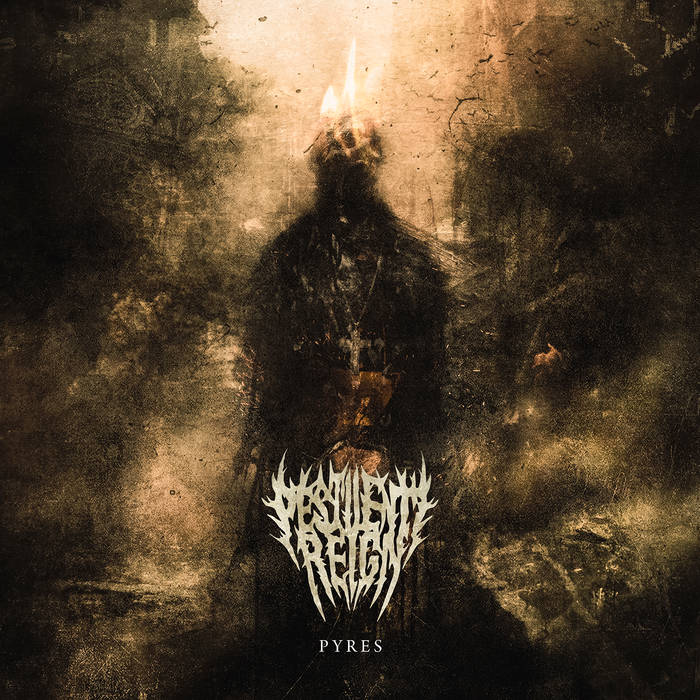 “You people are cancer!  Hnghhyghyyuargaahhh! Alright I’m not in a good mood now.” is how Pyres begins, but as soon as the music hits, what can I say – I’m in a good mood now!  When you think about it, all that’s truly needed for a good mood is a decent stereo or headphones and some well crafted death metal, one of which Pestilent Reign is more than willing to provide us.  Leave the politics and wacky conspiracy theories behind; it’s time to focus on what’s truly important in life.

There are two distinct styles that I detect in this album – one style is solid death metal similar to veteran Welsh bastards Desecration, and another more obvious style harkens back to the first couple of Psycroptic albums.  I’m sure the mention of either of these bands is sure to get fans of either of those respective styles riled up, but if you enjoy both bands you should adore Pestilent Reign. I’m not stopping there though, there’s more! The best part is how expertly these two styles have been brought together by a band that is capable of doing it in their own way.  It’s not like Leatherface, creating a mask with poor Sally’s face and expecting you to believe he is Sally. It’s more similar to genetic modification – if you know how to rearrange DNA and want the end result to be the creation of a great technical death metal album, your resulting lab-grown musicians will undoubtedly create something like this.

At this point, it’s probably obvious that we’re dealing with a group of very talented individuals here.  A lot of technical death metal gets too lost in the progressive/technical aspects and I end up wondering where the death metal went to.  Bands like that are especially guilty of forgetting how to write a fun song, and I quickly forget them after I’m done listening to them. While being able to write a song and play it well is an immense weak point for plenty of bands, it’s a naturally strong point for Pestilent Reign.  I can’t stop coming back to Pyres. The songs are extremely memorable and I look forward to hearing each song every time it plays. There are a copious amount of fantastic riffs on this album that flourish, thrash, and groove their way through your mind, as well as a healthy dose of awe-inspiring solos.  There are even several sections that have a bleak, black metal feel to them. The roots here are strong in death metal sensibilities though – razor sharp thrashing death metal riffs are the predominant structure of Pyres.

I could easily do without the 808 bass drops during a breakdown with the “pig squeals” (as kids so eloquently call them these days) – to me they cheapen a great song.  Fortunately these tactics to get the youth frenzied up are used few and far between on Pyres, making this complaint nigh moot. This is a well produced, cohesive, and incredibly competent album which stands proudly on its own outside of a large pack of forgettable technical wankery with zero substance.  Pyres will have you head bobbing, head banging, and your whole self thrashing about whichever space you’re listening to it in.