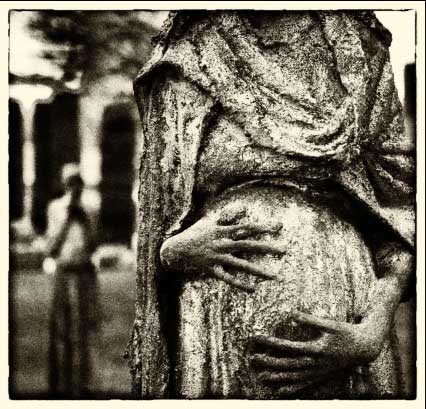 In their bio, Panzerfaust declares that black metal is “The war of all against all.”  The Lucifer Principle is indeed suggestive of war, but not the war of today, fast and hot.  No, Panzerfaust has created a soundtrack to the Great War, slow, ominous, brutal, and rotting.  Trenchfoot and mass charges brought down by the hail of lead from the new weaponry reside uneasily beside the darkness and dementia of months spent in oozing and frozen trenches.  This is not to suggest that World War One is explicitly being represented here, but rather that the horror, violence, and destruction of that conflict are being channelled into a conflict otherworldly.

Drums and vocals are the driving force of this album, handled by Lord Baphomet and Goliath respectively.  They push the listener ever forward, closer to the abyss of the void, in a death march worthy of any in history.  Guitars (Kaizer) and bass (Morbid) serve to slash and rasp the listener at every turn, creating chaos and misdirection so that there is no turning back.  The void calls.  There is no escape.  As a whole, The Lucifer Principle is haunting and ominous, dark as blackest sin, and utterly feral.  Viciousness and the violence of a torturer are woven throughout.  The one downfall for me is the Johnny Cash cover.  I love Johnny Cash and I even love the cover done here, but it’s not a fit for the rest of the album.  It broke up the momentum.  It is still darkly vicious.

Recommendation:  Dark, vicious, but ultimately unfulfilling due to length and the inclusion of the Cash cover.