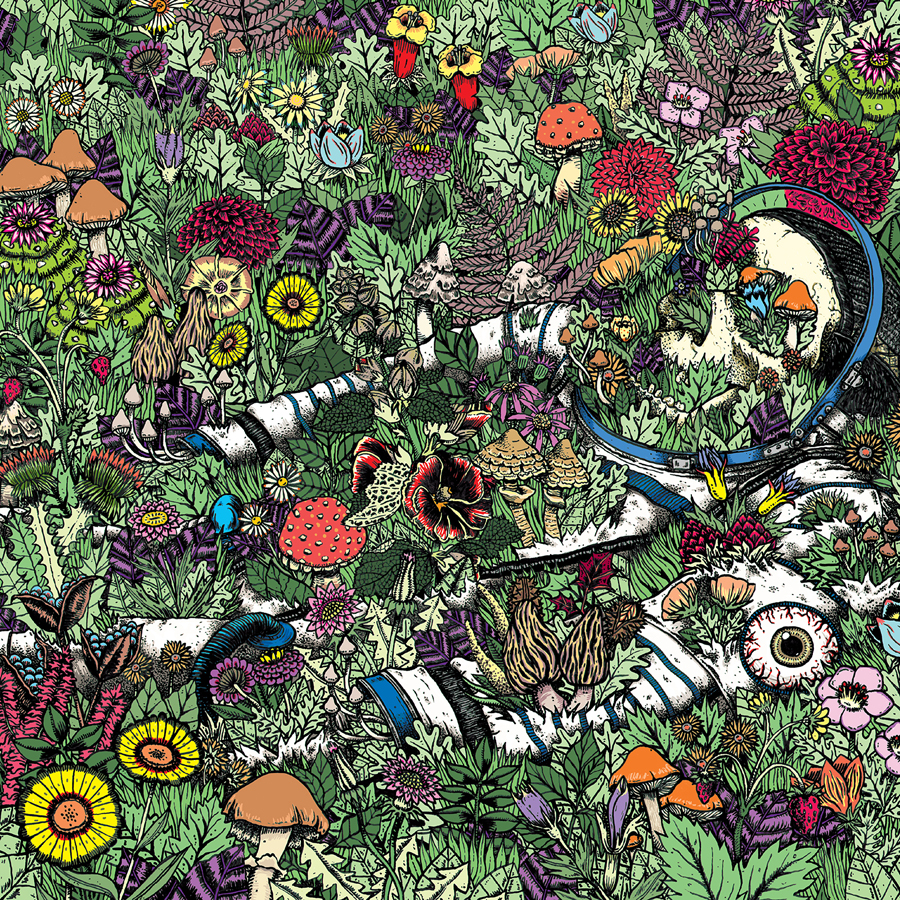 Oozing Wound remain my favorite black mold metal band, their style jokingly dubbed with this genre label during an interview I did with them two years ago.  I am, however, determined to make the label stick.  What could they possibly do after the destruction that was Earth Suck?  Well in many ways, more of the same.  Oozing Wound is one of those bands that has their own unique sound, in their case the bastard child of thrash metal and noise rock.  On Whatever Forever, they probably lean more towards the noise rock side of things (just like a snotty teenage band to spitefully move away from what is good for them).  In a recent interview, (found below) Zack hints that they are not trying to make art.  I would argue they fail in this.  Their sound has been so strong since their first release that their music definitely qualifies as art.  Sorry buddy.

Currently in my headphones as I write is ‘Everything Sucks and My Life is a Lie’ AKA track six out of ten.  The title alone gives you a hint as to what the band is (sort of) all about.  Thematically, they are cynically humorous, hate just about everything, and are not afraid to pick at metaphorical scabs either their own or societies.  On this particular album, they slow things down to pummel punch you into the abyss with them.  Vocalist Zack continues his snotty yells of discontent while turning in a mid-paced riff storm to drag you under. I think he got all his riffs from the hospital.   Kevin continues to abuse his bass without mercy. At least when he’s not surfing on it.  New drummer Casey is literally only allowed to speak by thumping the skins – I think they surgically removed his tongue – but he still speaks eloquently.

For my tastes, I prefer the faster tracks, like Eruptor or Tachycardia.  They sound more like Earth Suck (which I gave a 5/5 back in the day), but then I’m an old metalhead prone to nostalgia.  The band has moved forward with a new formulation of a similar recipe for disaster.  I really think the only thing left to do at this point is for them to record a Slayer cover album.  Read the interview below the jump.  It quite literally made me laugh out loud.

Hayduke X:  Hi guys.  Good to connect with you again.  Since I last interviewed you at the Gilead Media Fest, a lot has changed for you.  You’ve released two albums and changed drummers.  How would you say you have changed and grown musically through all of that?

Zack:  Well, just by continuing to write I think it forces you to grow, unless you are one of the sad sacks that loves to write the same shit over and over. So, I think the growth is just that we don’t want to blatantly repeat ourselves. Zig when you shoulda zagged kinda shit. I guess sometimes it’s also like, well, fuck it we like this too so why not write this kind of song we maybe wouldn’t have two years ago.

H:  How has it been breaking in a new drummer?

Z:  Casey is broken, he’s a giant broken piece of former human garbage now. We have molded him into half a man and now he can’t talk back. That’ll show him to join our band! We are gonna go full Newsted on his ass, no drums on the next album.

H:  I want to mostly focus on the new album, but Earth Suck wasn’t quite out yet the last time we talked.  I thought it was an incredible album and was generally well received from what I read.  Were you happy with it?  In retrospect, what are your thoughts on that album?

Z:  Listening back…it could use more bass, but I think it is pretty good. I don’t know if I will ever make anything that gets above the pretty good rating. But also, that is up for the critics to fight each other over and mischaracterize what we do and shit. Its rock n roll, so I guess we should take it as a very serious art form or something? But yeah, Earth Suck is cool, wish we could have gotten a little weirder maybe.

H:  Tell me about the process of making Whatever Forever.

Z:  I mean, it is all the same. We go into our basement dungeon moldy practice space and I will play a riff and we jam a bit. If they like it I will obsess over it and try to form a song and then it’s a back and forth with the boys. I might guide the songwriting aspect but we all form the songs into shape. We did that about 9 times, and then I had a ballad that kevin helped me make weird. I mean…that’s kind of the whole thing. Making the sausage isn’t exactly as amazing as eating it.

H:  Are you happy with the results?

Z:  Yeah, but then  you get to read all the shit people say about it and it is always annoying, even when it’s positive. I know some people don’t wanna know anything, but fuck that. I  always do. It is a sick and twisted game I play to see how much I can hate everyone, and then I can go write a song about it. It is a really beautiful process in that sense, like watching a tree getting bulldozed. You know, nature shit.

H:  How has fan response been to the new tracks when playing them live?

Z:  Pretty good, I think? What do you gauge it by, though? How many people showed up, how many stayed til the end? They headbang? They mosh? Did they buy three cds or an LP or some shit? Maybe they just say, “that was siiick.” On stage it can be really hard to judge, so I just keep my face behind my hair and scream in the mic. So far so good!

H:  The album feels a little more nuanced, but a little less aggressive than Earth Suck.  Was that purposeful?

Z:  Part of it was a reaction to playing in Europe and needing more material but less screaming, another part was the never ending fucking Slayer comparisons that just make no fucking sense. All the fast songs on Whatever Forever were the newest songs, I really didn’t want to write anything like that for almost a year. Since it is still happening maybe we’ll just go full on 90s Metallica on this shit and shit out some real turds. Now I think we will get those references no matter what the fuck we do so, fine. What the fuck ever.

H:  What themes (both lyrical and musical) are present on the album?

Z:  I mean, more songs about buildings and food? The lyrics are not really the focus, just some sprinkles on the ice cream, but some people really wanna make a big fucking deal out of the sprinkles.  But musically, it’s more Yes and Beach Boys and Steve Reich all filtered through fast heavy guitar stuff. We like to think you can surf to all these songs, it is the secret of the sauce.  But I guess to some people it’s Kreator and Slayer and Metallica and all that. Maybe that is all it is?

H:  Where do you go from here?  What’s next for the band?

Z:  Well, literally Winston-Salem, North Carolina as that is where we are driving to. But more tours, more jammers and bangers, maybe some rippers and creepers coming down the pipeline? Just keep on chooglin.