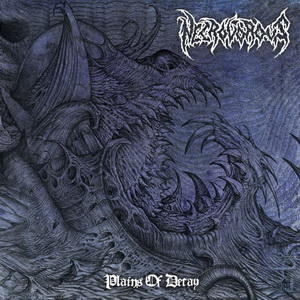 Dark Descent have, after their 8 years of operation (happy 8th anniversary!), managed to plant themselves firmly on the pulse of everything that is great in death metal. Releasing and distributing materials outside of that, as well, when I think of the Dark Descent name I think only of everything awesome about death metal, period.

This slab of filth slathered murked out death metal is coming from Dark Descent on September 29th by way of death metal masters Necrovorous. With a little over a decade under their belt as a band, Necrovorous have managed to craft a brand of death metal all their own while simultaneously hearkening back to tried and true stalwarts in the game and the foundation that they laid.

Riffs, my friend. Riffs. “Plains Of Decay” is absolutely littered with some of the most incredible and catchy yet brutal riffs I’ve heard in some time. It’s honestly a pretty incredible release on those merits alone. The movements that serve to take a moment of reprieve from riff heaven are split fairly evenly between gargantuan breakdowns and epic songwriting.

“Eternal Soulmates” a stand out track, if I had to pick. I’d probably give you a different answer tomorrow. Or in an hour. It’s an incredible record like that.

You probably hate death metal if you don’t love this record, tho, srsly.