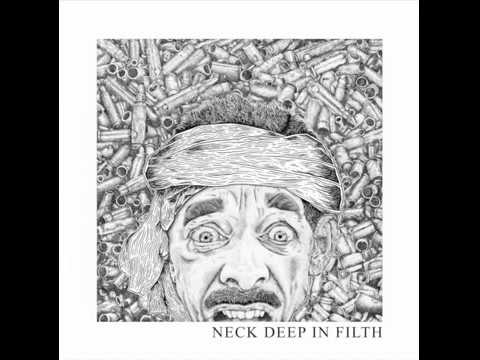 Back in 2005, a movie called Unleashed came out. It featured Jet Li as a man who had been brainwashed and enslaved by organized crime. He wore a dog collar and served as a guard for them. When they took the collar off, he would attack whomever they pointed him towards. In one scene, they bring him to an underground fight club and put him up against a much bigger opponent. He calmly walks into the ring and throat punches the guy three or four times so fast that Li is able to turn and walk out of the ring before his opponent falls down dead. This EP reminds me of that scene. It is feral, dangerous, and destroys you before you know it.

Neck Deep In Filth hails from Kathmandu in Nepal, which I’m told hosts one of Asia’s heaviest music scenes. The band includes Vishal on vocals, Sushil on bass, Sandesh on guitar, and Sanjay on drums. Together, they have combined to create a sound that is at once a throwback solidly placed with the genre and a diverse collection of sounds. What do I mean by this? Within the structure of their crust punk, the band includes elements of other sounds and switches things up from song to song. On at least one track, I heard some slight blackening. There is some subtle noise influence that includes well placed and appropriate samples. All in all though, this is CRUST PUNK, much like a Molotov cocktail remains a Molotov cocktail regardless of the grade of fuel you use.

Listening to this brief and intense eighteen minutes takes me back to earlier days. I find I write mostly about various types of extreme metal these days, due to many factors, most notably because that’s most of the promos we receive. My youth and young adulthood, though, is firmly rooted in hardcore punk, crust, anarcho punk and the like. Neck Deep In Filth can join the ranks of bands that make me raise my fist, wave my black and green flag, and rise up. Let’s go!

Recommendation:  A worthy addition to my revolutionary soundtrack. Check out Praise the Tyrant to hear my favorite.