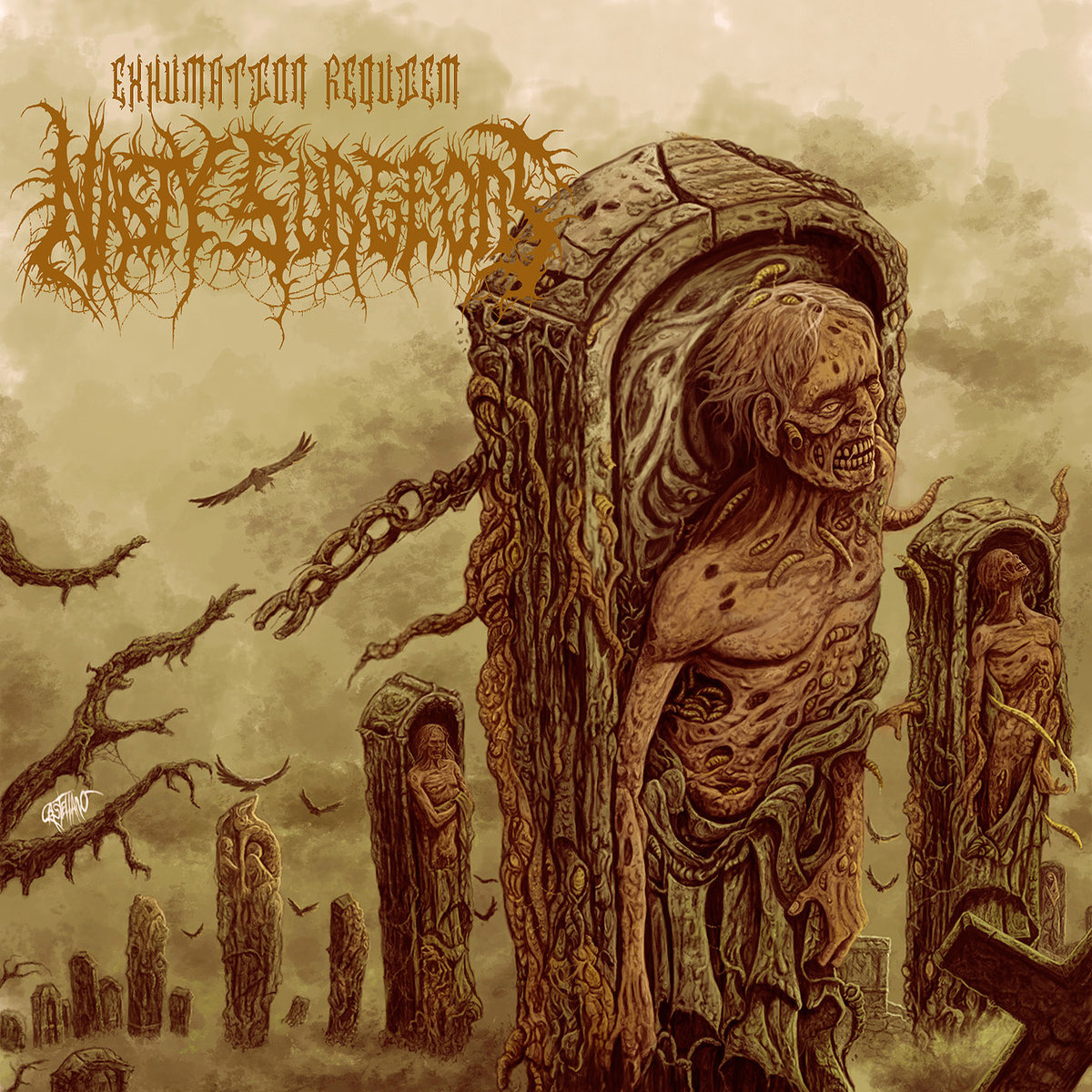 I recently had the opportunity to send some questions to Spanish Death-Grind band Nasty Surgeons.  You can read their responses below followed by my review of Exhumation Requiem.

Hayduke X:  Congratulations on the release of your first full length album Exhumation Requiem.  The album is seriously vicious!   How has the reception been so far? Are you happy with how the album has turned out?

Nasty Surgeons:  Thanks! It´s great to hear you like it. Actually, we are really happy with the reception in general. We didn’t expect such amount of positive reviews and interviews. Especially if you have in mind that this is our first album.

HX: The little bit of backstory I could find on the band says that you guys formed to play something more raw and more extreme than you were already doing.  Can you tell me more about that?

NS: Yes. Actually, two of us are members of Mistweaver (Ramón-drums and Raúl- guitar and vocals). This band has been active for twenty years playing melodic death metal and Raúl wanted to do something more extreme in a grind way. Because of this, he wrote some songs and told Ramón (drummer) to record it. This is how Nasty Surgeons was born.

NS:  To be honest, it has been something really smart and easy. Actually the whole album was created in about one month, maybe because it was something new and fresh for us. Raúl wrote all the stuff and then Ramón learned the songs and a couple of months later we recorded drums and then guitars and bass. Vocals were recorded after the summer.

HX:  What gear are you using to get that buzzing guitar sound which is so prominent right from the opening riffs?

NS:  Well, in the studio we recorded the DI guitars using a Radial device and then we did not do the reamp as we had in mind. We used some good guitar emulators and plugins and the final outcome was really cool (in my opinion). On stage we have Peavey 5151 and ENGL Fireball (Bands you should pay for this !).

HX:  What is the album about thematically?

NS:  When we founded the band, the intention was to play songs with topics related specially to surgeries. In fact, this is the main reason of the name of the band (Nasty Surgeons). Some of the lyrics are based in real stories (The Resurrectionists, The Creation of the Monstrosity…), and some of them are just about dissections, cannibalism… regular stuff in extreme metal hehehe…

HX:  Tell me about Human Flesh is Also Food.  Is there some deeper political message there or is this just gore-grind at its finest?

NS:  We don’t want to disappoint you at this point, but we have to recognize that at least our idea was not to introduce any hidden idea beyond the lyrics of this song. It’s just another gore-grind song but this time related to cannibalism. We’ve seen this sentence in vegan things, but we are not into that.

HX:  Can you tell me about the formation of the band and give me a brief outline of the band’s history?

NS:  As we explained before, the band was started by Raúl and Ramón from Mistweaver, as a way of making something more extreme that what they were actually doing. First, Raúl composed the album and then it was recorded by them in the Undead Studios in Burgos. Once the album had been released by XTREEM MUSIC, they decided to complete the band adding another guitarist (Gonzalo) and a bassist (Adrián).

NS:  Musically, for this band or for any of our other bands, we have Carcass, Exhumed, Necrony, Slayer, Entombed, Dismember, Iron Maiden,….too many to mention and non-musically, we used to see gore films (especially when we were younger), the real life which is rawer than any horror film,… Today, with the internet. You can also find any good idea for the lyrics just surfing a bit. And we listen to those mentioned bands as many others from Heavy to Grind.

HX:  It seems like the Spanish scene is pretty strong.  I’m certainly hearing about lots of Spanish bands.  Does it feel that way over there?

NS:  Our feeling is that these kind of metal styles are now more generally accepted than some years ago. For instance, many great bands that are coming up now in our country are becoming more and more popular among the audience. We don’t know the reasons for this, but let´s hope it keeps like this for many years.

HX:  What are your touring plans now that the album is released?  Can we expect to see you in the United States at any point?

NS:  At the moment we just gave our first gig at the Bunker Metal Festival in Salamanca in March, our next concert is at Brutologos Festival in Palencia in May and we probably will play in Burgos in September. Currently, we are not expecting to have the opportunity of playing abroad (but we are definitely open to it). However, we hope that when we release our second or third album we will be playing abroad, hopefully in some festival (maybe United States, who knows…). Anyway, we fit perfectly at Maryland deathfest, Baltimore Deathfest or any of those big festivals you have over there and at Obscene Extreme in Europe. Let´s wait.

NS:  Like we said before, currently we just have played live once. Nevertheless, we would like to describe our live performance as very energetic. Our songs in general have very fast rhythms that directly push the crowd into mosh pits. We can watch the audience having a great time with our performance and so do we!

NS:  Well, we obviously would like to share the stage with one of our main influences such as Carcass or Exhumed. We also would like to play at an extreme metal festival like the Obscene Extreme Festival or something similar!! And, in a deeper dream, we could do a worldwide tour with Carcass, General Surgery, Exhumed and Nasty Surgeons. We would open the night and so we could be drinking beers while we enjoy staring at our favourite bands!

NS:  We all agree that playing music is one of the things we enjoy the most in life. Obviously, we all would like to earn a living just from our music, but given that nowadays this is almost impossible (especially with these styles), we have other daily jobs. Besides, music is also a way of evade ourselves from our troubles and helps us to face them. If we would not play, what else could we do? Probably we´d stay in the pubs drinking all day in a senseless life.  I don’t know.

NS:  The cover artwork was done by Juanjo Castellano. This is not the first time we work with him given that he has designed covers for Mistweaver and Mass Burial. We have to say that when we first asked him to do the artwork, we expected something more related to surgeries or something similar. The result is something different that we expected but we are also very pleased with it. We think that it reflects in a very proper way the whole atmosphere of the album.

HX:  Is there anything else we should know about Nasty Surgeons?

NS:  Yes. We are currently working on our next studio album and we hope we will record it soon so it can be released at the end of this year or at the beginning of the next one. Stay tuned for news!! And of course, we have new shirts that you can check on our Facebook or Bandcamp and you can order directly to us at solobscurabitur@hotmail.com. If you want us to play at your fest (birthday party, wedding or whatever) just get in contact.

HX:  Thanks very much for your time.

NS:  Thanks to you for this great interview.

Exhumation Requiem is the debut release from new Spanish death-grind band Nasty Surgeons and man, do they ever come out of the gates fast. The band combines elements of Stockholm death metal with grindcore to create a stew of nastiness from which I can’t help but repeatedly partake. Signed to the prolific Xtreem Music, the band immediately shows they are ready to play with the big dogs. You can read the story of their formation above, but I’m sure glad they did.

Guitars, handled by Raul Weaver and Gonzallo Dalle, combine to form wave after wave of sickening riffs. One of the guitars plays pretty cleanly while the other secretes a horrifying buzzing atmosphere. The contrast of the two builds a sense of unease for the listener. Adrian Ruiz plays chunky bass riffs that feel like a mallet hitting meat. Drums, played by Ramon Mur, feature a combination of blasts and double bass, but are almost invariably fast and driving. The net effect of all of this is a goregrind album that stands out from the pack. I can’t wait to hear what comes next for the band.

Recommendation:  Nasty Surgeons surprised me with their mature and complex take on goregrind. I think this one may just make it onto my year end list.