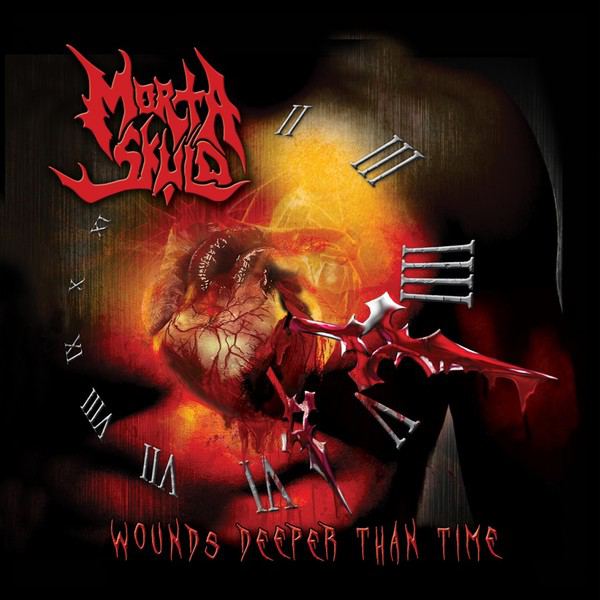 All up and straight from the offset, I am a HUGE fan of these guys. If you think this review is biased by that, then may I suggest you go fuck yourself. I only say that nicely because if you don’t subscribe to this particular style of music, i.e. Death Metal, then read no further and go away and do whatever it is you do. You will find nothing here to please you.

Now that all the haters have left the room, let us get rid of a few more people. So you liked all of Morta Skuld’s earlier releases, yes? Did they let you down somewhere on the line? Did you just give up and think they were never coming back then? Well guess what fuckers. You were wrong. Have you even bothered checking this out is what I want to know. Go listen then come back and read on, okay? Good.

A long time between full drinks may be the case. Twenty years to be precise, but holy shitbags dear reader, do they make up for it in no uncertain terms. Wounds Deeper Than Time is a very apt title for this release, and to be fair, with such a long time since their last full length, one may well be forgiven for thinking they may never return. Luckily for us they have.

Only one of the original members now remains, being Dave Gregor who handles guitar and vocal duties (and just so happens to be the subject of our interview). Joining him in the business of making such an unholy racket is Scott Willecke on the other six string, A.J. Lewandowski on the bass and Eric House pounding the skins.

And what an absolute fucking pounding does this album deliver. Right from the opening track ‘Breathe in the Black’ you are aware that not only do these guys mean business, they fucking OWN the business. The guitar tone is pure crushing excellence, the drums and bass both propelling the madness along and anchoring it way down in the depths of the department of really heavy shit.

Tracks like ‘In Judgement’ and ‘Devour the Chaos’ just bore into your skull like some sort of demented bone shredding denim vest with the sleeves torn off wearing woodpecker, and truth be told, their is no filler at all for these wounds. Every song on offer here is pure unadulterated menace, just the way we like it.

Wounds Deeper Than Time may as well have been written during the 90’s, such is its intensity. 20 years is a long time, and many a man has been known to mellow over shorter periods, but not our mate Dave. Fuck no. Seems he’s been carefully holding all of his hate and rage in for just the right moment. The injection of fresh blood into the corpse has certainly only added more magnificence to the mighty entity that is indeed Morta Skuld.

2017 has been a fantastic year for death metal as a whole, but this one has played the game better than most. Do not pass Go. Do collect as many dollars as you can and go buy this fucker right now.

Recommendation: A Monopoly of the death awaits. 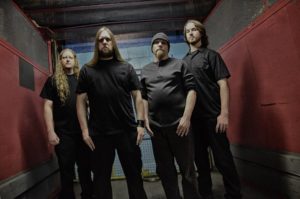 Hayduke X:  Thanks for taking some time to answer some questions. Let’s start with the current album. How has it been received so far?

Dave Gregor:  So far the album is doing well and seems to be received well.

HX:  Are you happy with the result? Do you have any tracks you are particularly proud of?

DG:  Yes I am very happy at the way everything turned out. My favorite tracks would be Breathe in the Black, and In Judgement.

HX:  You recently toured in support of Wounds Deeper Than Time. It was great catching you guys on your way through Michigan. How did the tour go overall?

DG:  Oh, thank you so much. It went very well, I was very humbled by the fans and how they have waited so many years to see us. It was just a very humbling experience.

HX:  Tell me about the writing and recording process for Wounds?

DG:  Well, we had written over a period of year and half and had a line up change mid way of process. So we had to start over a bit and get new guys into the swing of the songs we were working on.  We did pre-production and entered the studio with Scott Creekmore and recorded the entire album with him.

HX:  Lyrically and thematically, what is the album about?

DG:  It is about the abuse in one’s life. The idea that time heals all wounds in some cases isn’t true. Some scars will always remain.

HX:  In the past, you have played with some pretty big names. Are there any that stand out? Why?

DG:  The two biggest for me was Slayer. That is because it is, well Slayer. The other would be Death, which is my all time favorite band and influence.

HX:  As a huge Napalm Death fan, can you tell me what it was like playing with those guys?

DG:  They are so nice and easy to be around, Barney always calls me by name, which is crazy as we don’t see each other much. Love that guy!

HX:  Take me back to the beginning. How did Morta Skuld come together as a band? What was going on musically and otherwise that drew the original lineup together?

DG:  Well, we started out being a some what cross over band that developed into death metal. I meet Jason and we both knew a few young guys in town and got together and started jamming. We had a singer, but at that time, he was still not what we had in mind, so I became the singer by default. After that, we did the first demo, and then a line up change, and then second demo, and then drummer change, and then we had solid line up until 1998.

HX:  Tell me about the breakup of the original band, what you did in between, and the resurrection of Morta Skuld.

DG:  Our drummer at that time didn’t want to tour For some reason, he didn’t tell us until he quit after a failed attempt to tour with us. After that, I tried to find another drummer, but this genre wasn’t the in thing and many didn’t want to play the heavier stuff. So I formed a band called 9mm Solution, and did two albums and tour with it, and did pretty well.That ran its course, and I was sitting around for a year, and my old manager says get the band back. I’m like, ‘Who is still playing?’ and next thing i know the demo line up is back together. We did a few shows, had another line up change, and now have the guys that did the album. I am so amazed by these guys and their talent.

HX:  As I understand it, you are the only remaining original member. Is that correct? How is the chemistry of the new lineup? Is this a lineup you see sticking?

DG:  Yes it is and am only orgiinal member left. I love playing with these guys as they all bring something different to the table.  Scott had been in the band before so he fit right in. Eric had a style that was from day one a great fit. AJ has brought a new element to the band. I look forward to writing next album with these guys.

HX:  What’s next for the band? Are you working on new music already?

DG:  Well, we have a few fests this next year and maybe a small run of the US again.  We have four new songs and are working on new ones soon, as we get a break in shows. We are hoping to record in 2019.

HX:  What else should our readers know about Morta Skuld?

DG:  That we have new album out. If you can buy it, that would be a great way to support the band. It’s available at Peaceville Records and Burning Shed, who have all our reissues out for order. Thank you so much for doing this, and to all the fans that support us, we thank you.