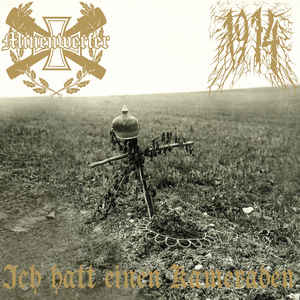 During the years of 1914-1918 in Europe (primarily), the Great War blazed, or rather slogged inch by inch through the mud.  The two bands involved in this split release, Minenwerfer from California and 1914 from the Ukraine, have created a concept album focused on the Carpathian and Masurian campaigns on the eastern front of this terrible war during the years 1914-1915.  As a historical album, really as an album in general, Ich hatt einen Kameraden (I have a comrade) is a masterpiece.

Up first is the tense, fierce, and fiery black metal of Minewerfer.  Through four tracks, the three piece project uses a template of mid-paced and traditional sounding black metal to create a violent and warlike atmosphere.  You feel like you are in the trenches facing the enemy through the torturous barbwire.  Minewerfer does a very solid job, playing a relatively clean, but emotional, black metal style with modern production value.  They are not rewriting the book on making black metal, but they do an excellent job in both composition and attack.

The other side of the album, featuring 1914, takes a more experimental approach, though only slightly so for the most part.  The five piece band combines elements of black metal and death metal, with doom metal pacing to create a more ominous sense to their music. This side is more psychologically tense where the Minenwerfer side is more physically tense.  The tracks fit well with what Minenwerfer has done and vica versa, though with each having their own touches.  The exception is the final track entitled Gas Mask (Eastern Front Remix), which is a brutally compelling combination of industrial noise which hits you in a dark and visceral way.  Listening to this track makes me uncomfortable and tense, and yet keeps me hooked in, not wanting to turn it off.  It is the least like the other tracks on the album (by far) and yet it may be the best track.