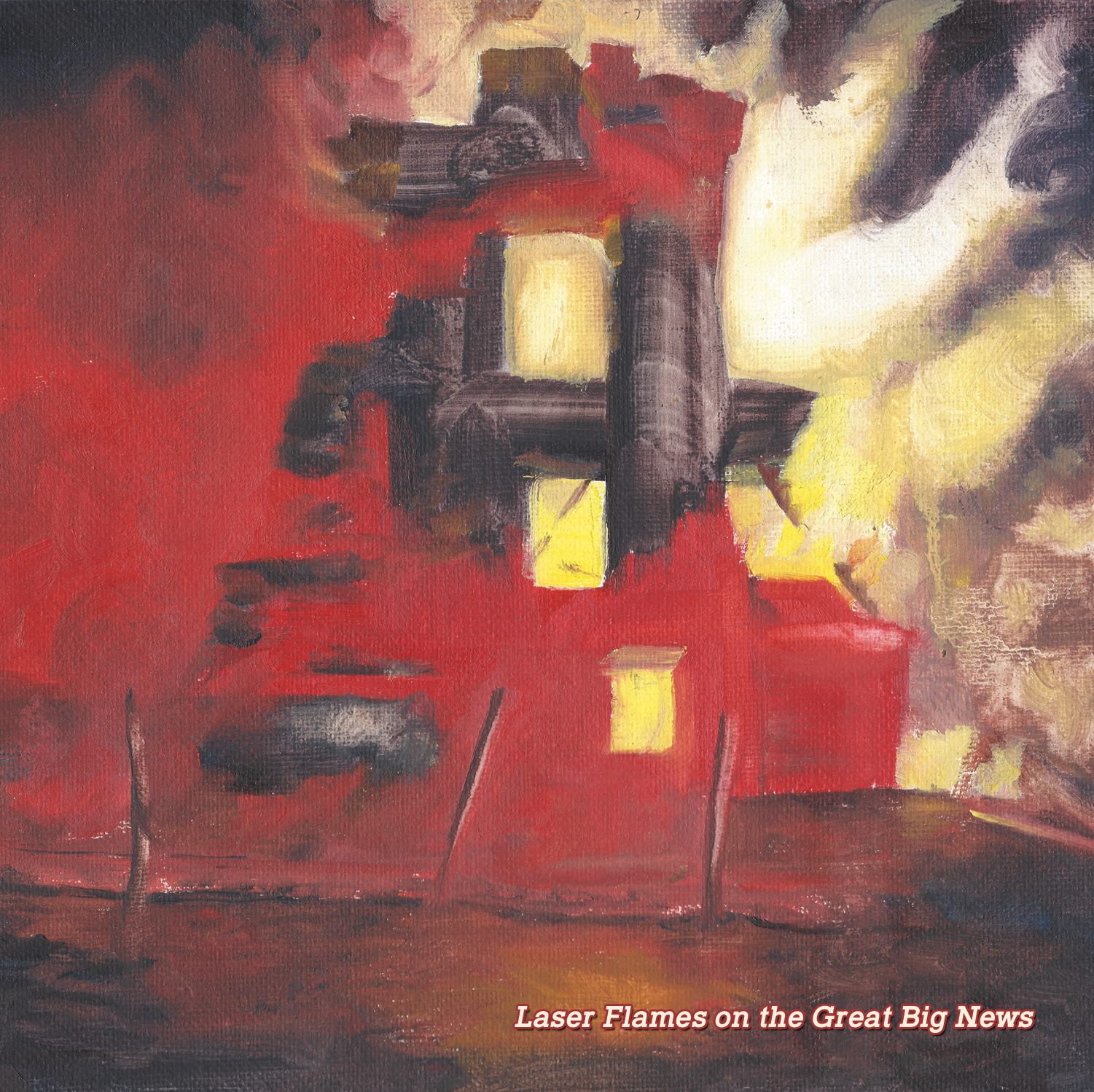 It’s probably just the teacher in me, but I feel that I should start this review with a little history lesson. Five or six years ago, Rage and Frustration was launched by yours truly as a weekly online radio program. By the rules of the station, (rynothebearded.com which you should absolutely support) I could only play music licensed under a Creative Commons license, which is a way to choose how strict your copyright is. I spent a lot of time on Bandcamp especially seeking out bands who licensed this way. One day, in my travels, I discovered this album called Lambs to the Slaughter by the strangely named Laser Flames on the Great Big News. Though not licensed in this manner, I hit play anyway and found myself immediately blown away. In the intervening time, I have switched over to a review blog, starting reviewing good heavy music regardless of license, and moved my blog onto MoshPitNation where I get to subject all of you to my musings. Laser Flames on the Great Big News, it would appear, didn’t do much. It took them that whole time to finally release something new, a self-titled debut full length. I don’t know much of their story, but assume they have lives outside of music, probably have played a bunch of shows, and most certainly have honed their craft. The resulting album, much less extreme than my usual fare, is so well composed, arranged, and played, that it is a top five contender for my end of year list.

So what makes this band and album so special? Well, let’s break down some component parts. Anchoring the band at the back end with a hard hitting rock and roll style, we find James Turk on drums. His sense of pacing, where to add fills, how hard to hit the skins all seem immaculate. Next we have Brian Myers on bass. Working in cooperation and with Turk, he adds tension to the rhythms and helps alternately drive the pace forward or pull it back. Then we have John Judkins who handles, according to Bandcamp, guitars, vocals, and lap steel. His guitar work layers over top of the granite rhythms, playing with melody and dissonance. The lap steel, I would assume, is steel guitar, which I think in hear in parts. I’ll hold off on vocals for a second to introduce the fourth and final member, Stephenie ‘Stevie’ Bailey, who handles guitars, vocals, banjos, and violin. Whichever guitar parts she handles, versus Judkins, the comments I made above will suffice. Banjo and violin add addition layers to the music, adding some Americana feel in parts. Now to the vocals. All the instrumental pieces of the puzzle are excellent, well composed, layered, and tightly played. For me, however, it is the dual vocals that make this album. Judkins has a strong, mostly clean vocal style that diverts into a harsh yell in some of the more intense parts. A+ for his work here. Bailey’s vocals, however, are transcendent. I now have her in a category of vocalists in my head that includes Royal Thunder’s MLNY Parsonz and Janis Joplin. She uses her voice as a nuanced weapon to take you on an emotional rollercoaster ride through the exceptional sonic landscape the band has a whole has created. I will say the duality of the two vocalists adds to the strength of the album. As exceptional as her vocals are, the album as a whole is better for the combination.

Final thoughts: Laser Flames on the Great Big News are a hard rock band that flirts with some doom metal influences, but also alt-country Americana. If you read my reviews to find the next excellent extreme metal release, this will probably disappoint you. If you have an open mind about music, this will blow you away. This quartet sounds much bigger than four and combines the best parts of many influences into a musical ride both melancholy and triumphant.

Recommendation:  I can’t encourage you enough to listen to this masterpiece. Also, Laser Flames on the Great Big News, please come play for us in Grand Rapids, MI.