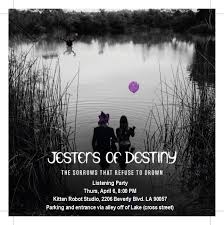 Jesters of Destiny – The Sorrows That Refuse To Drown

Album – The Sorrows That Refuse To Drown

After forming in LA, California in 1984, Jesters of Destiny is quite possibly known as the first “Alternative Metal’ band. They released an EP then their first full length album “Fun At A Funeral” in 1986, followed by another EP “In A Nostalgic Mood” in 1987, prior to their very quiet disappearance. It’s been said many times that their upbeat peculiar psychedelic style of metal was born in the wrong era, and it just never seemed to find its place. Ultimately, leading to the band quiet vanishing in 1987-88.

Now, rising from the ashes, this legendary psych-metal group proves they’ll be quiet no longer in this monumental comeback album that is over 30 year in the making. Leading in with some of the same peculiar sounds as in the past, giving an almost old-school Black Sabbath element to the mix, not taking away any massive personality from their Jester sound. This is like a beefed up version of the old band. Sometimes even more upbeat and peculiar than ever before. And at the same time, in the other direction, they seem to hit a whole new level of Gloom at some points than ever before as well. Also, showing how talented and rhythmic they can be in the no-drum diddy “Happy Ending.”ANd also a very well thought out cover of John Lennon and Yoko Ono’s “Two Minutes Silence.” But, none of these songs seem to carry the same weight as the booming “Fire In the Six-Foot Hole”, This one really carries the comeback torch, its mighty thunderous riffs show us what we’ve been missing out on all these years.

Hello, this is Deranged D on behalf of Moshpit Nation here with your interview questions for Jesters of Destiny.

DD: Hello, and how’s it going currently? And what are your plans coming up??
Bruce Duff:  It’s going pretty well.  We’re having a listening party here at one of the studios we recorded in, Kitten Robot, on April 6, the day before The Sorrows that Refuse to Drown comes out worldwide.  The next day I’m off to Joshua Tree for the Desert Generator festival with Brant Bjork, the Shrine, Orchid and other delinquents.

DD: Who are your biggest influences as a musician?
Ray Violet: This has always been a great question because when I think about my influences as a musician, I think about creativity and artistic motivation. Musically, one of my strongest influences was Link Wray. I listened to his first vinyl release until it had no fidelity left (and back then I didn’t even discern fidelity). Having just acquired an electric Epiphone guitar and amp I learned all the songs and then had the luck of seeing him at a local nightclub {and I’m talking about a club that hosted big bands, the biggest crooners like Sinatra, Bennett, etc.), and although it seemed out of place, he was electrifying in that upscale setting. That said, hearing the Brandenburg Concertos by J.S. Bach was always an enormous influence, not necessarily directly, but his music spoke to me and it caused me to start studying Classical guitar at 14. As I grew older, I found the paintings of Leonardo Da Vinci just fantastic and it caused me to start perceiving the time necessary to actually create something extraordinary. It also helped me to understand the difference between a talented artist (in any field) who can listen/observe others and play/paint/etc. what they hear/see and the seminal creative artist who forges a unique signature that others follow or mimic (this includes many technically advanced artists that don’t have the ability to CREATE). As I mentioned, great question that isn’t easy to completely answer.

DD: How did you come up with the name Jesters of Destiny, and what does it mean to you?
Bruce:  It came to me in a dream.  I woke up and wrote it down and told Ray about it the next day.

DD: What is your biggest motivation with your peculiar style of metal?
Ray: I love the sound of the guitar in heavy metal. This is the first ingredient. Then I find so many styles of music so enjoyable, I just can’t stop within the heavy metal genre. Why stop there, ‘More, More, More’ she said!

DD:  Can you tell me the reasons behind your initial split as a band?
Bruce:  It was back in the late ‘80s days, and we couldn’t get a recording contract, and already had two records out through Metal Blade. So, not being able to release new music put us at a disadvantage.  Funny, with Ray’s work as an engineer, producer and all-around studio guy, we could record music as much as we wanted, we just couldn’t get it out.

DD: What made you decide to return to music and ultimately the reunion of the Jesters?
Ray: As with most reunions, they are just the tip of the iceberg. Bruce and I have been making music all along. The fact is you can’t just force creativity in order to continue musically. There has to be a spark of some sort which there was a short time ago. Bruce sent me a demo of “The Misunderstood” (it’s on the new album) and I loved it. That inspired me to create the riff and chorus vocals for “Fire in the Six Foot Hole.” I played it for Bruce and I could see his eyes light up like they did when I played him the “Diggin’ That Grave” riffage and chorus.

DD: How do you portray yourself as a band?
Bruce:  In dark hues with a day-glo psychedelic background. 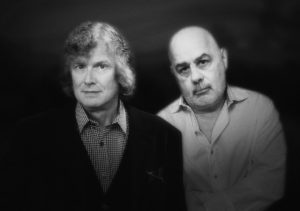 DD: Tell me how it feels to be back together and making music together again and touring? And tell me how you feel your music has progressed.
Ray: I love making music again. It is all consuming. I feel our music is quite similar to the original stuff. It’s hard to tell what the progression is; that’s up to the listener.

DD: Tell me about your first show back together.
Bruce:  We haven’t played it yet!  We are separated by 3,000 miles and connected by technology.

DD: Where do you get your best crowd response other than home, and do you expect a bigger response this time around?
Ray:  I think that we have a growing core following and a bunch of new listeners. I have no clue where because with the internet things become global.

DD: What’s your favorite Jesters song to play live?
Bruce:  “End of Time,” which was the first one we recorded before we knew what Jesters were.  It established a format we often returned to wherein the solo section was totally open, like free jazz, and we would give someone in the band the job of cueing everyone back into the song structure after we had all visited the upper stratosphere.

DD: What Jesters song has the most meaning to you personally?
Ray: “Unknown Artist.” It speaks to what we were up against (as well as many other musicians) when we were trying to get a leg up on our first go-around.

DD: Tell me about a day in the life as a member of Jesters of Destiny?
Bruce:  Same as most everyone else I suppose.  Play with my cats Lux and Lemmy, chase the wife around the house, practice and record at some point, get on the phone with some of the musicians I manage, watch The Daily Show.

DD: What do you use to get your classic sound? Gear talk?
Ray:  Mainly a 1967 Dan Armstrong wide-neck electric with the double-coil pick up, A 1956 Les Paul Special with 1967 ES335 pickups, a Marshall and an Orange. One last addition, an Experience box that I borrowed from Tim Harrington.

DD: If you could open for any band past or present who would it be?
Bruce:  We opened for both Jane’s Addiction and the Flaming Lips, those were pretty ideal match-ups, don’t know if we could improve on it.  Currently been digging the dual drummer set-up of Thee Oh Sees, that would be a good one.

DD: What do you listen to that gets you going?
Ray:  Lately J.S. Bach, Black Sabbath, Sailor’s Hornpipes.

DD:What does this new album mean to you?
Bruce:  It means a lot on many levels, personally and professionally.  I think most of all it sort of vindicates a lot of the ideas we had back 30 years ago.  What made Fun at the Funeral work, why are people still talking about it?  Have we updated it while staying true to it and to what the Jesters were all about?  I think we did, maybe even surpassed it.  But then I wonder if you can ever hit that same initial momentum and flash of originality again.  Do the New York Dolls think their 2006 LP topped their first two?

DD: Where is the best place to find info/music/merch on Jesters of Destiny?
Ray: Our Website JestersofDestiny.com and Facebook as well as Ektro Records; a fine musical emporium.

I sincerely thank you for your time and this opportunity, on behalf of fans all over and Moshpit Nation, best of luck in your future endeavors!!!