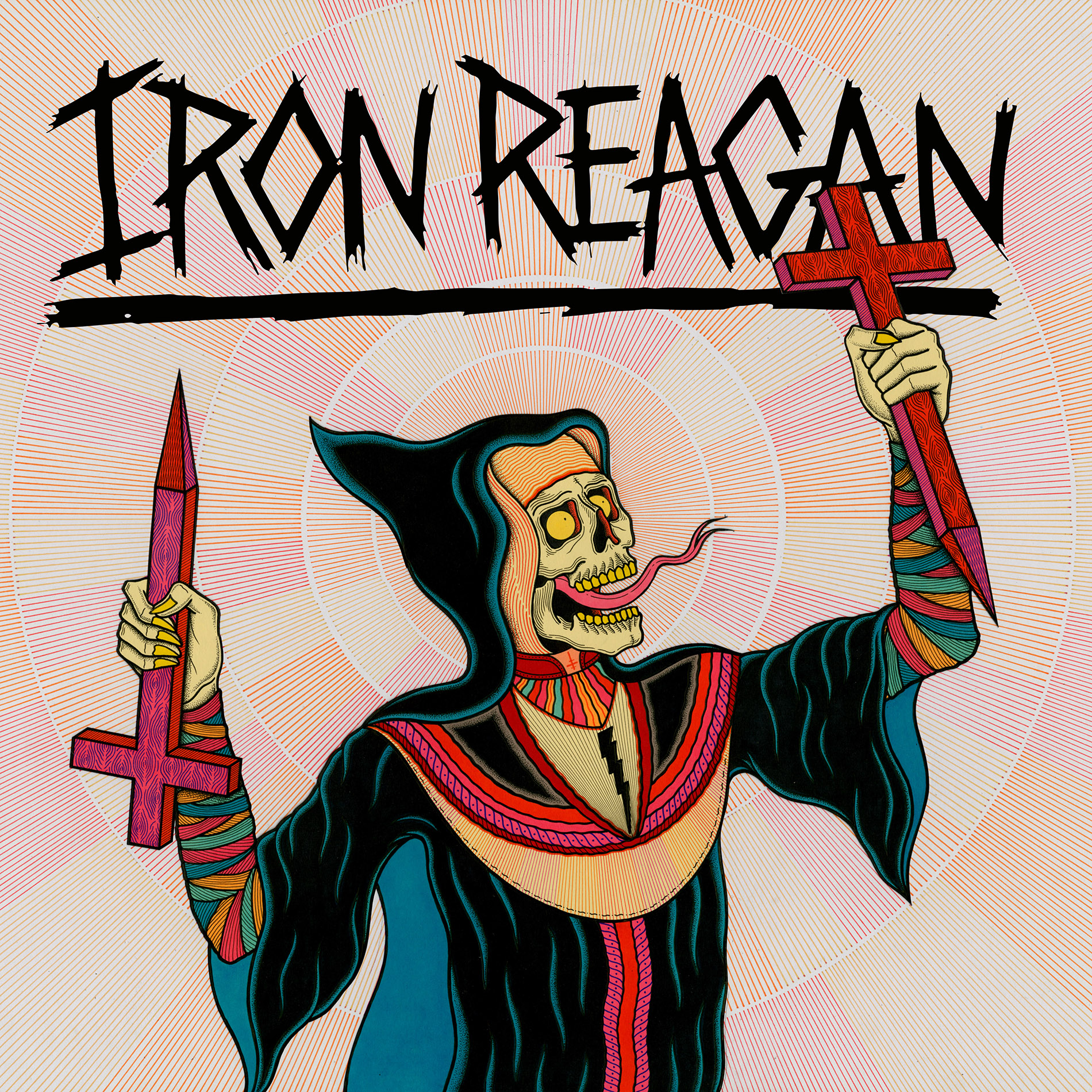 I recently had a chance to catch Iron Reagan live at the Marble Bar in Detroit (along with Nemesis, SNAFU, and Power Trip) and it was an amazing night.  Iron Reagan got the crowd moving without having to beg.  The pit was primarily a circle pit (my favorite flavor).  At one point between songs, Tony Foresta took a moment to commend the people who had been stage diving…FROM THE BAR.  Yeah, it was that kind of night.  Musically, the band sounded tight and furious.  At the end of the evening, I had a chance to catch ten minutes or so with Tony to talk about what is going on with the band.  Below the interview, there is a review of the new album.  Enjoy!

Hayduke X:  Alright.  How are you doing tonight?

Tony Foresta:  I’m great.  We just loaded all our equipment out and it’s good.

HX:  So, why don’t you start by saying who you are and what you do in the band.

Tony:  My name is Tony Foresta.  I sing for Iron Reagan.

HX:  That’s you guys man.  It was a great fucking show.

HX:  How’s the tour been going?

Tony:  It’s been great.  It’s awesome.  It feels like, just being with Power Trip and everybody, we’re on this wave of a new realization of people getting into thrash music.  It’s great.

HX:  Yeah, thrash is kind of coming back around.  There’s some really good modern stuff that’s really reminding me of when I was 18.

HX:  I hear there was a little fun in Canada.

Tony:  Yeah, we got fucked at the border…of course.  Our drummer got a DUI 9 years ago.

Tony:  It was the dumbest DUI too…and he’s still paying for it…

Tony:  …and we payed the price this time.

Tony:  We had…we taught three separate drummers four songs.  Cause that’s the secret.  If you need an emergency drummer, you get multiple drummers, and teach them…so they only have a few songs to learn.

Tony:  Well, that was our approach to it, because our songs are short.  We wanted to stay as tight as possible.  It worked out great. These amazing musicians played.  The drummer of Skull Fist…yeah, it was amazing.  There was an all star line-up of insane drummers.

Tony:  Some of them were even showing off a little bit.  One dude was twirling his drumsticks around.  I was like, ‘Come on buddy. This isn’t fucking American Idol.’  But it was really good.

HX:  That’s great.  Well, I’m sorry your drummer couldn’t go with you, but it sounds like it worked out anyway.

HX:  I don’t know if you’ve ever heard of the Canadian thrash band, Propagandhi…

Tony:  Of course, ‘Fuck the Border’, man (referring to a Propagandhi song).

Tony:  Of course I know Propagandhi.

HX:  It’s one of my favorites.

Tony:  I mean, you saw it [referring to the insanely good show I had just witnessed].  It’s been great!  It’s been really fun.

HX:  I personally loved it…

HX:  Are you guys happy with it?  Like, is it everything you wanted it to be?

Tony:  Yeah, it was just a weird time frame, recording it, so…as far as, lyrically and shit, but…yeah, it was cool.  I’m pretty stoked about it, because I think…it came across pretty well.  It was such a weird time when we were writing all these songs, politically, and socially, but…yeah, I’m glad we made the choices we did.

HX:  Good.  Is there a bigger message you’re trying to get across, like you mentioned politically and so on?

Tony:  I mean, with this record, it’s more like we’re all fucked either way, so push more positive.  Let’s fucking do something positive.  At least, that’s what I try to do with it.  There’s so many songs.  Every song has a different message, you know.  I feel like the vibe of it with this one was like, ‘We’re all doomed.  Let’s move, you know.  Let’s do something.’

HX:  Thrash, in general, has a long history of being political.  Do you guys consider yourselves a political band?

Tony:  I don’t want to do that, because…It’s funny you mentioned Propagandhi, because I always, like, admired them when I was younger.  They were funny, and goofy, and they didn’t take themselves too seriously, at certain points, and they had a great point to get across.  In my brain, I always wanted to do something like that with metal.  It’s just that heavy music, like, metal is more dark.  So, that’s kind of like the whole vibe of Iron Reagan.  It’s just like, push something positive, through the darkness.

HX:  Let’s switch gears and talk about album art a little bit.  Who designed that cover?

Tony:  David Cook and it’s Bone Thrower.  He’s amazing.  He’s done art for Young Widows, Mastodon and shit,.. I don’t know.  We just wanted to do something that wasn’t a typical thrash metal album cover.  I’m pretty stoked on the outcome of that.

HX:  I’ve kind of talked around it a little bit, but you guys play kind of an older style.  I mean, thrash, crossover, like I said, is from back in my teenage days.  Why did you decide to do that?

Tony:  I mean, there was never really a decision, it was just play like…

HX:  In terms of specific bands, what are some of your own musical influences?

Tony:  Oh shit, man, I think The Accused, …Agnostic Front, …If we get real old, older shit like Blade.  That’s not really older shit, with Agnostic Front, but like… Yeah, I don’t know, man, I love the Beastie Boys a lot, …all that kind of shit.

HX:  Props to your guitarist for that Crass shirt [that he wore on stage].

HX:  How did you guys start as a band?

Tony:  That’s a loaded question.  It was kind of more like me and Ryan, the drummer doing something fun.  We grew up together.  We wanted to just create something that was fun.  It was supposed to be like a Richmond thing that we were going to do.

HX:  What’s next for the band?

HX:  Awesome.  Is there anything else you think our readers should know?

HX:  Thanks.  I appreciate your time.

Welcome to 1988.  Welcome to my youth.  Seriously, Iron Reagan on Crossover Ministry makes me feel like I just stepped out of a time machine in the late 80s…or maybe they just took the time machine the other way.  With 18 songs and the longest coming in at a whopping 3:37, the Virginia 5-piece rips through the album in the best crossover thrash tradition.  In fact, the title track suggests that they have essentially made crossover a religion.  We shall all now bang our heads and pray.

Musically, the band is not re-inventing the wheel.  I read an interesting article recently (I apologize, but I forget where) that suggested that for each innovation in music, there is also a reaction back to more traditional ways.  Iron Reagan is certainly leading the charge for the tradition of fun, meaningful, headbanging thrash.  Mark Bronzino and Landfill Hall rip off punky riff after punky riff.  Rob Skotis on bass and Ryan Hall on drums keep the pit circling with maniacal rhythms.  And, of course, Tony Foresta yells his lungs us, driving all listeners into a froth.  While I love innovation in art and music, I also love tradition.  What I’m not so fond of is imitation, especially when it falls short of the original.  That latter is not Iron Reagan though.  This 4-year-old band would fit exceptionally well in the scene of the late 80s, probably because these guys lived it too.

Recommendation:  All praise the Crossover Ministry!