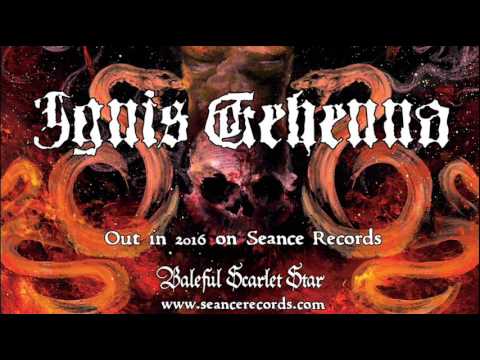 Baleful Scarlet Star is a violent entity released from oblivion and come to utterly destroy.  Way back in 2007, Ignis Gehenna began life as an international duo with Nihilifer from Australia crafting all music and Archfiend from the United States serving as scribe to the abyss.  After an early demo and an EP released in 2010, Nihilifer began to nurse the beast along in a savage larval state until finally completing the six track monstrosity we are considering today.  This album shows yet again how strong the Australian black metal scene is currently.  I am know longer surprised on hearing blackened brilliance to hear that the project hails from Australia.

Though Baleful Scarlet Star contains elements of death metal (especially in the down-tuned chaos of the guitars), this album is black metal through and through.  The themes are prominently Luciferian.  The vocals, though lower pitched than many in the black metal world, remain more rasp than growl.  Maniacal guitars riffs with intermittent tremolo picking complete the package, giving just a touch of rawness.  The complete effect is mesmeric.  The listener feels lost in the void, caressed by tendrils of malevolent sentient fog, all while staying (barely) out of sight of creatures on our blood trail.  The inevitability of our capture and sacrifice to the dark ones is ominously ever-present.