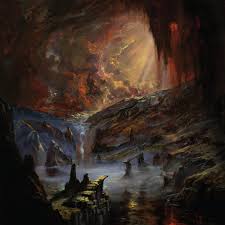 Horrified – Allure of the Fallen

Album – Allure of the Fallen

Newcastle, upon Tyne to be precise is the stomping ground of UK based Horrified, purveyors of all things both Melodic and Deathly. This album “Allure of The Fallen” being their third since inception in 2012, and if you listen closely enough you can almost feel the rich tapestry of myth and legend that surely surrounds them seeping into you slowly,

Apparently originally formed as a straight up Old School Death Metal project. Somewhere along the way things got a little more Melodic, which, in itself, is not such a bad thing if you are that way inclined. By no means has this directional change reduced their outright power, which can be immense to say the least.

The riffs on this release are outright jaw dropping at times. Guitarists Dan Alderson (who also handles vocals that are particularly Wraith like in delivery) and Dan Jordan switch between soaring harmonies, Black Metal tremolo picking and crushing Doom slabs of withering power with ease, fleshed out with the rumbling bottom end of Lee Anderson’s Bass and the pummeling drums of James Charlton, who are both outstanding in their own right. The Bass lines are extremely impressive and very clear amongst all the racket, and again some of the drumming would not be out of place on any Black Metal release, such is their intensity.

It took me a little while to completely gel with this album. As you will see from the majestic melodic start to the doomy brutal end, there almost seems to be a change happening to the band during the recording process. That’s not to say that any of these songs are less worthy than any other, just that the ending is remarkably different from the beginning. Almost a gradual descent into the depths is the only way I can describe it, a very enjoyable descent at that.

Recommendation: Stick around for the whole show. Don’t cherry pick this one and you will no doubt be well rewarded.