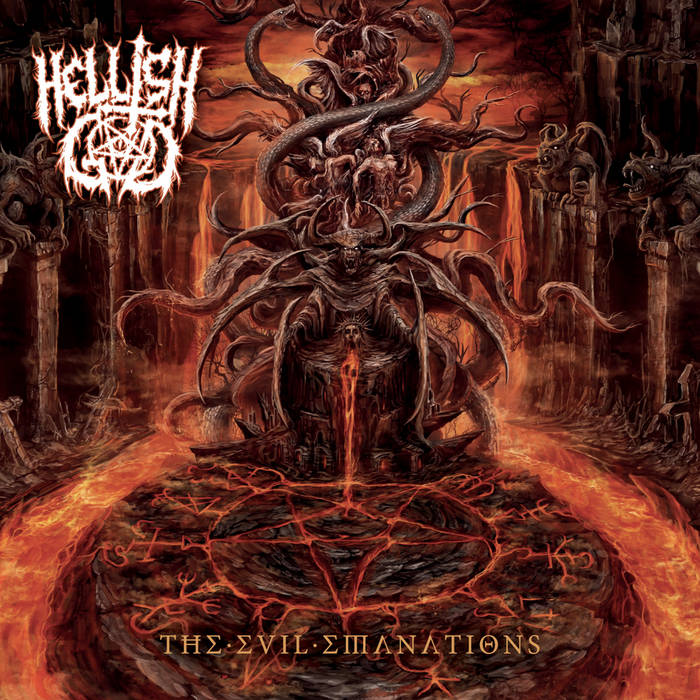 In recent months, thanks to the influence of friends such as The Great Mackintosh, I have started delving into death metal in a more serious way. What I’ve discovered is that I do like death metal, though I’m still pickier than I am with black metal or grindcore. One fairly recent find comes from the up and coming Italian label, Everlasting Spew. I expect great things from them in 2018, and The Evil Emanations is a great way to start to dig into what they have to offer. The album is chaotic and brutal while remaining under control.

The magicians behind Hellish God include Michele Di Ioia (guitars, backing vocals), Luigi Contenti (drums), Malga (bass), Tya (vocals), and Matteo Gresele (guitars). Their combined might becomes a war machine with caustic riffs, a destructive rhythm section, and a hate-filled vocal attack. There is nothing pleasant about the Evil Emanations. It sounds like a tank division rolling forward with hellfire for artillery. Prepare for imminent sonic destruction.

Hellish God with lock you into their madness, where they will run you through a meat grinder that spews acidic bile over the remains. They will draw and quarter you into exact fourths. They will smash you into oblivion, reanimate you, and then smash you again in an infinite loop. The Evil Emanations is brutal death metal that is not Brutal, metal that sounds like war, but is not War metal. In fact, though they are so obliterating, it is really the classic sound from the late 90’s that they most call forth. An excellent, if not entirely original take on the genre.

Recommendation:  Hey look. I like death metal!  Seriously, you should get this.