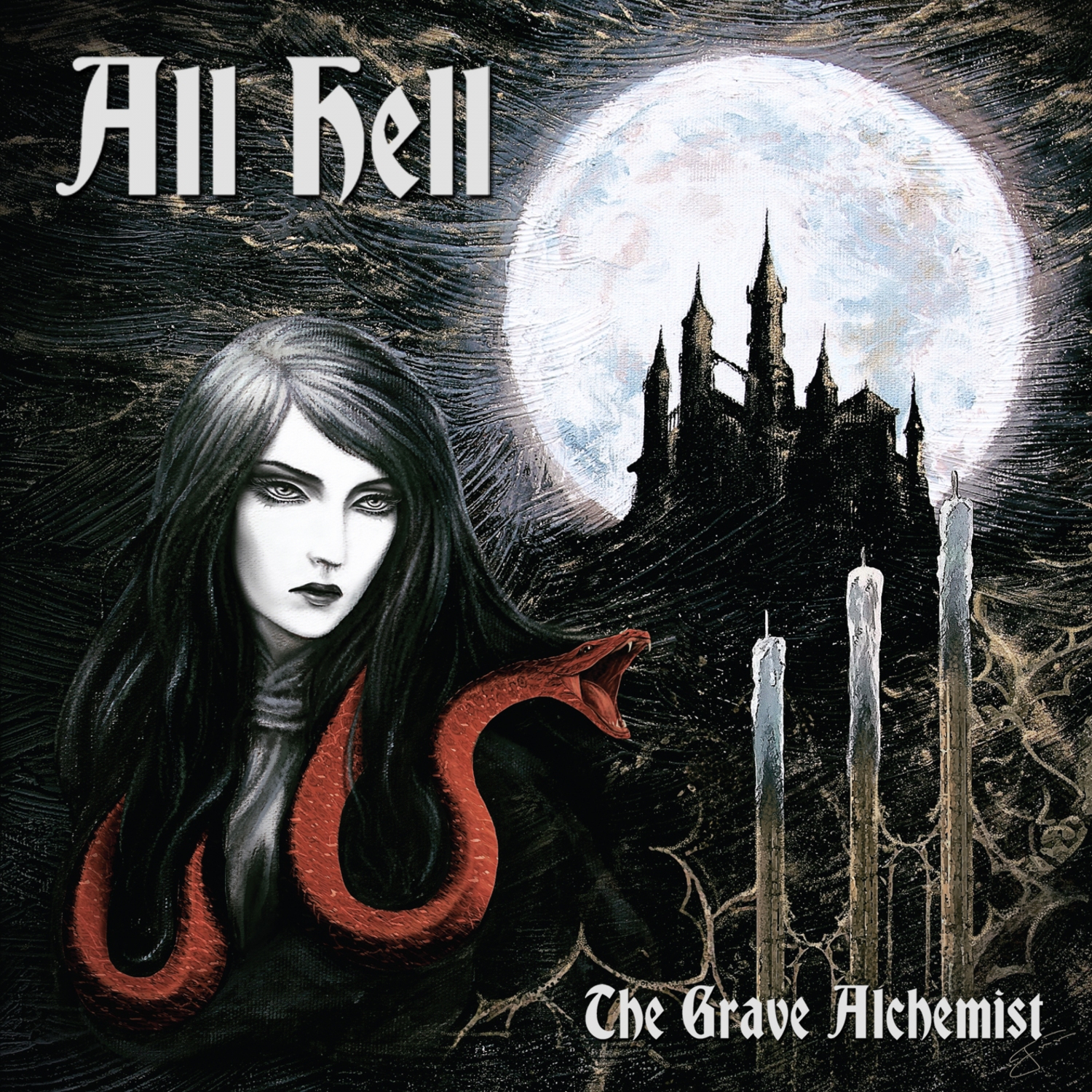 All Hell – The Grave Alchemist

All Hell, is from Asheville, North Carolina.  The Death metal group formed back in 2013. Although, many times classified as “Death metal,” I’d like to think they have more of a “Blackened Thrash” sound. After releasing their brutal debut, “The Devils Work” in 2014, they took a short tour. Less than a year later, they released the mastodon of an album “The Red Sect”, where they really started to find their own, almost European sound in metal, thereby stapling themselves into the modern metal scene.

And now, wasting absolutely no time yet again, they look to release their next full length album with a horror concept called “The Grave Alchemist.” Returning producer Joel Grind of Toxic Holocaust is back to put his touch on the album. By sticking to their aggressive, old-school evil and almost European style of metal, all while remaining ungodly catchy and heavy, they make it nearly impossible to catch your breath from track to track. This narrative driven metal madness is guided by high velocity guitar and beating drums, with pitch perfect, gritty vocals. And the lyrics stick to you as well with the grim music, with themes of Alchemy, Vampirism and Necromancy. It’s a great blend of magic, violence and darkness. A huge beating track in “Laid to Unrest” shows you just how nasty this band is willing to be, along with my favorite on the album, “Return of the Reaper,” whose throat shredding vocals leave most other modern bands in the dust and has to be enough to raise the dead. And the album closer “I Am the Mist” shows this album is consistently heavy from beginning to end.

Recommendation: Non stop metal. For fans of Death or Satyricon.

Interview with Jacob of All Hell 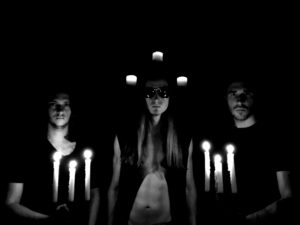 DD: Pretty good, you all set to go? I was actually just sitting here listening to the new album, kinda stuck on the song “Return of the Reaper”

Jacob: Yeah, I think that one is going to go over well live.

DD: So, how’s it going right now, and what’s your current plans with the band?

Jacob: Everything is going pretty well, we’re getting ready to debut a new music video for “Laid to Unrest” and then the week after that is when the album releases. Then at the end of April we start a short tour.

DD: Excellent, got any shows in Michigan?

Jacob: No, not right now, I think we’re gonna do a short run of shows in the Midwest this summer hopefully. I’ll keep you posted.

DD: What made you guys decide on the name All Hell?

Jacob: A few things…First, from the Samhain version of the Misfits song “All Hell Breaks Loose,” we just wanted to shorten it to All Hell for Samhain, that’s where we initially got the name from. I also like it because it doesn’t really pigeon-hole us in one genre, it’s not like “Intestinal Desecration” or something ya know.

DD:  Yeah, you don’t just hear it and put it right in some sort of category…

DD:  What was your first concert?

Jacob: The first show that I ever went to was a CKY gig in Winston-Salem, NC. I think I was about 14 years old.

DD: How was that?

Jacob: It was good, definitely a good experience for my first concert..

DD: Who are your biggest influences musically?

Jacob: The Danzig influence is pretty big, all his projects, Danzig/Misfits/Samhain. As far as more extreme stuff, early black metal, first wave or kinda like Proto metal. Bathory, Celtic Frost, Venom, Hellhammer, that sort of thing. And then we get a lot of influences from weird stuff, soundtracks, 80’s death-rock to old school black metal, and some newer stuff. Lots of influences.

DD: Yeah, when I listen to you guys you like, send me straight to Norway, you sound like some straight Norwegian metal.

Jacob: Haha, yeah, I think it’s good if people listen to your band and they can’t tell when or where you’re from. I think that’s usually a good sign.

DD: Definitely. So, speaking of where you’re from, North Carolina correct?

DD: So, what inspired you to play this type of music, obviously it’s not very popular there?

Jacob: That’s a good question…we’re just all kinda fans of this sorta thing, there’s not really a huge base of people that are into extreme metal or what have you in this part of the state. I guess we just kinda found each other and gravitated towards that, I mean there’s not really an established scene for this kinda stuff here. There’s a couple more extreme bands, but it’s actually pretty tough to solidify a lineup. It’s pretty hard depending on where you’re at. Some towns have these huge crazy music scenes, where it’s easy to throw together a band, and there’s 20 great bands at any given time. Some places are just harder than others I guess.

DD:  So, tell me bout your first gig together…

Jacob: I think the first gig was in August 2013, we had a different drummer then, original drummer. We played a pretty short set maybe 8 songs, and 2 or 3 of those were cover songs, I think there was a Samhain cover in there, which happens less and less. Especially now, that the new album is almost out, we have like 34-35 original songs to choose from, we might break something out on special occasions. But for the most part it’s just gonna be original stuff now.

DD: Yeah, it’s always easier to cut someone else’s songs than your own.

Jacob: Yeah definitely. It’s already pretty hard, the new album comes out, we’re obviously really into the new stuff, so it’s hard enough to decide what old songs we’re gonna keep in the setlist, much less covers or anything.

DD: So, tell me about your gear a bit, what do you use to get your tone?

Jacob: As far as guitar stuff it’s pretty minimal setup, my amp is a Peavey Windsor, which is basically a JCM800 clone. And as far as effects go, I just use an Ibanez TS9-DX tube screamer, which is kinda TS9 tube screamer with a couple extra little functions on it. Yeah that’s it as far as effects or anything goes. We keep it simple. Less moving parts that can screw up.

DD: What’s the biggest message that you want fans to receive from this new album?

Jacob: That’s a tough question. It’s a concept album, so it’s a narrative driven story, but at the same time there’s also a few different layers to it. The story itself is a container for bigger ideas. And I think it’ll be interesting to see what people interpret themselves. I don’t want to divulge too much about the message so to speak.

DD: Where do you find your writing inspiration, and what makes you want to write about Alchemy and other stuff like that?

Jacob: A big source of inspiration is old literature, and history as well. For this album in particular I was reading a lot of old gothic horror literature. As well as some newer stuff. And also reading a lot of occult alchemy type stuff.  Old literature from the Middle ages and up. Even a few centuries after that.  A lot of themes and ideas came from that kind of stuff. It kinda goes with what we wanted to accomplish with the theme of the album as well because alchemy can be taken literally or it can be seen as like a symbolic system. And then you get into the whole psychological aspect of it, like with Carl Young and his theories on alchemy and dreams and all that stuff.

Jacob: That’s a tough one…..***Long Pause……I’m a big fan of the new track that we just had a lyric video for actually, “I Am the Mist”, among the band it’s one of our overall favorites. So I’ll just go with that one for now. I think that one is gonna be a lot of fun to play live too.

Jacob: That one I think is gonna be one of them. Playing “Suffer For Me,” off the first album always gets a pretty big reaction and people usually go pretty nutty for that one. So, that’s always fun to see a lot of violence and movement.

DD: What do you do to maintain a bond as a band and keep the chemistry there?

Jacob: We get together and play pretty often, we actually all live fairly far apart from each other, Asheville is more or less our base of operations, but all of us live 30-50 minutes outside of Asheville is different directions. But, yeah working on the songs together, I write all the stuff, but then when it’s time to work on a new album, I bring in the songs and we all work on them together, then everyone adds their own little touches to it. We practice a lot, we try to get together as often as we can, just to keep everything tight. I think we have always made the live performance a huge priority. We haven’t had too many inner struggles or turmoil within the band.

Jacob: Yeah, I think so too. Yeah, again with having the simplistic gear setup and the way we do our songs. I guess this record is a bit more complex than past stuff. But it’s also a conscious decision not to do much on the record that we can’t do live, and maintain the same feeling. Like, I don’t wanna record 16 guitar parts on a track when it’s just gonna be me playing it live.

DD: If you could fill in for any band past or present, what band would it be, and what would you play?

Jacob: That’s tough. ****very long pause**….I haven’t ever thought about that before, it’s tough because most of the bands that I would choose I wouldn’t necessarily wanna replace anyone that’s in those bands. I’ll go with second guitar for Celtic Frost.

DD: So, in a music industry that quite often snubs metal, how do you plan to leave your mark?

Jacob: I think the way to really leave your mark, is to not get caught up in trends, or what’s popular at the moment, because metal is such a niche’ thing anyways, who cares about jumping on the next extreme metal trend. One band will do something and then 15 bands will copy them and think they’re gonna be successful. It’s a good idea to ignore that and focus on doing what you do best. If you master what you’re good at I think you have a much better chance of making something that’s gonna be timeless. In my opinion.

DD: What is your biggest personal goal as a musician?

Jacob: To create a lot of art that’s gonna outlive me for a long time and hopefully impact a lot of people.

DD: What’s the biggest message from All Hell that you want to project to your fans?

Jacob: I don’t know that we really have a message, we’re not much of a message band.

DD: So, coming off this album you’re gonna have a lot of momentum behind you, if you could take that momentum and where you guys are now as a band, and open for any band past or present, who do you think would be the biggest dream opener for you guys?

DD: Where is the best place to find info, merch and music, and everything that the fans would want to find on All Hell?

Jacob: Probably our Bandcamp page, which is allhell.bandcamp.com. Bandcamp for music and stuff like that, and Facebook just for updates and tour dates and news and stuff.

DD: I think I can speak for all the fans in saying we look forward to seeing you on the road, hopefully we get a Michigan show soon.

Jacob: Yeah hopefully so, I’ve been wanting to play Michigan for a while. Hopefully we’ll make it happen.