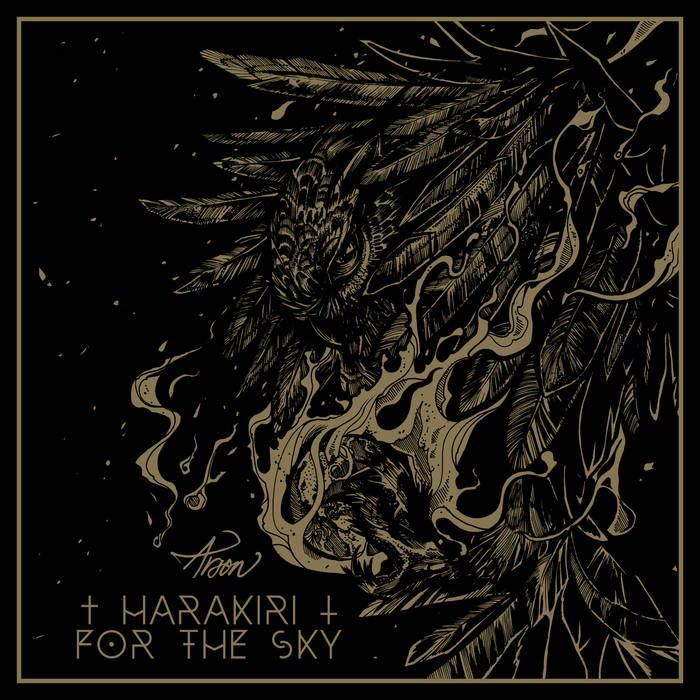 Harakiri For The Sky – Arson

Band – Harakiri For The Sky

Make no mistake. This album is titled Arson, because it burns everything to the ground. All of society’s dogma, expectations, and restrictions are put to the torch by the waves of fiery passion raging through the interior of this album. Harakiri For The Sky are one of those bands that are best described with adjectives, not sub-genres. Post-black metal is an approximation. I think I’d go with blackened pain-righteous rage-burning passion-no loss is acceptable-empowering emotional hardcore. I don’t think you’ll find that one in any list of genres though.

The word ‘harakiri’ of course, is a Japanese word referring to the ritual suicide through disembowelment by samurai who had been dishonored. The way it is used in the name of this band, to me suggests that the whole of the world has dishonored itself and must perform harakiri. That’s a pretty bold statement. From what I gather of the message on the album, I’m not sure their view is quite that extreme, but I don’t think they are pleased with mainstream society. Their method for dealing with it is different from what I have just suggested, but I’ll get to that in a bit.

First, the music itself. The project itself is actually only two individuals. M.S. handles all instruments and songwriting, which include guitars, drums, bass, piano, and possibly more. The compositions are emotional, with waves of pathos washing over the listener, gripping your soul in harmony to the existential crises being played out here. J.J. handles the vocals and lyrics. His passionate yells speak to someone with a visceral need to spread the gospel of loss and redemption, hope and horror, of which he sings. The combination of the efforts of these two individuals is powerful nearly beyond measure.

All of this brings me back to my comments at the end of the second paragraph. My favorite song on Arson, which is chock full of excellence front to back, is their cover of Manifesto by Graveyard Lovers. This track includes guest vocals by Silvi Bogojevic. The interplay between the harsh plaintive vocals of J.J. and the haunting majesty of Bogojevic’s voice is magical. More than this, though it’s a cover, the lyrics at the start of this help to sum up what the album means to me at least, whether the intention was there or not. The first two lines are: “I took out my pen and pad and set to write my manifesto/It was a one-line poem said don’t let nothing ever get you low.” This album strikes me that it is full of tragedy and horror, full of the pain of dealing with these things that society throws at us, but ultimately Arson is about collectively having the steel within ourselves and our scene to deal with these things.

Pure gold doesn’t come directly from the ground. The stuff that is mined needs to be heated at very high temperatures to separate it from the dross. Arson is the fire set by Harakiri For The Sky to bring out the gold in all of us. Will you allow it to do so.