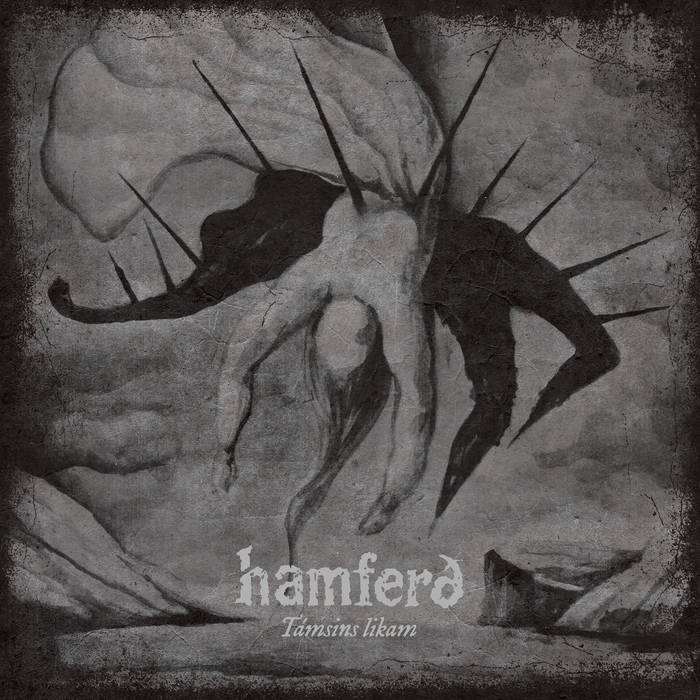 Doom is such a broad genre in our modern times. My favorite bands are able to incorporate their surroundings into their sound, almost as if a geographical thumbprint was placed on the reverberation.  So many bands attempt to interject atmosphere into their music with mixed results. To call Hamferð a doom band is doing a disservice in my mind. They are clearly ahead of the genre on their latest offering Támsins likam.

The album opener Fylgisflog starts right off by setting the tone for the album. Taking its time to deliver a mournful narrative, it’s a full four minutes before the band truly blossoms. This tension continues throughout the album and proudly declares its tale of despair.  Equal parts delicate yet crushing, the album rides the balance between hypnotic and punishing. The dynamics on this record are breathtaking. It often shifts cleanly from a sense of calm to a stampede of giants very confidently.

Track five, Hon Syndrast introduces a galloping blast beat right in the middle of the song that elevates this foreboding sense of dread to the next level. It is extremely tasteful and reminds the listener of an unstoppable horde. My favorite thing about this album is that it is unashamed about its textures and influences. Vocals range from operatic to monstrous death metal growls and it all ties together so seamlessly.

I’d like to lift a quote from their bio: “This is a sign of a band being in no hurry to make hollow statements but taking the time they need to create and shape their art before presenting it to the rest of the world.” I actually feel that this is a rather fitting description for their music as well, almost like the thunderous beast slowly stalking its prey with no hope of escape.

Támsins likam is truly a masterwork of which I am currently obsessed. It has not left my player since its introduction. This is a Hell of a way to start off 2018, and I am willing to predict that this will easily be at the top of my list next year.

The latest album from long standing doomsters Hamferð comes out on Metal Blade Records January 12, 2018. I was fortunate enough to get the opportunity to speak with Jón Aldará (vocals) and Theodor Kapnas (guitar).

Gentlemen! Thank you so very much for taking the time to sit an answer my questions.

Tamsins likam is an incredible piece of work. Your dynamics are incredible and are only outshined by your sense of atmosphere. Every song carries the weight of a Wagnerian movement.  I hear so many influences in your music. I am curious to hear about some of your influences outside of music that may have added to this body of work.

TK: Thanks a lot for your kind words! It’s funny that you mention Wagnerian movements, one of our main influences when writing this album was classical music and the way a symphony is comprised by several movements which ultimately add up into one large piece of music. We wanted to do something similar, an album which is meant to be heard from beginning to end with songs that work like movements in the context of the whole record.

Jón: The environment and the weather on the Faroe Islands are quite unique and prominent players in daily life here, so it’s inevitable that they play a role in the music of Faroese artists. We are very aware of these factors as inspiration, and we try to incorporate into our music the atmospheres generated by Faroese landscapes and oceans and how they interact with the weather patterns. It is sometimes violent, often grey and heavy, occasionally joyous and green, and practically always beautiful.

I mean this in the absolute best way possible: This is a very warm sounding album for having such a cold and dismal feel.   When you started recording, how did you approach the process?

TK: I work as a recording engineer and music producer, so just as with our two previous releases I have produced “Támsins likam”. I work out of the biggest recording studio in The Faroe Islands, so most of the recordings were done there. We have access to some really nice instruments and rooms so we decided from the off that we wanted to make a very honest and real sounding album. The way we usually record is that we first make demos of the songs and then start recording the instruments one by one, usually starting with drums and finishing with vocals. The recording of this album was a very intensive project since there are so many things involved. We recorded real cellos and double basses and all the choirs that you can hear on the record are not keyboard sounds but real, sung choirs.

I think we started recording in early summer 2016 and finished the album in early October. And for the first time in our history this album was not mixed by me. Instead we decided to have it mixed by the one and only Daniel Bergstrand in his Dug-Out Studios facility in Uppsala, Sweden. Daniel is a good friend of mine and is known for working with artists such as Meshuggah, In Flames, Behemoth, Pain Of Salvation etc. It felt like this project was too much of an undertaking for me to be able to finish it myself, and I think we made the right decision since Daniel did an incredible job on the mix.

The sound of your music creates a very solitary landscape in my mind. I have read that your natural surroundings and cultural heritage has helped shape your music, and I applaud your decision to keep the lyrics in Faroese. What parts of your culture most inspired your music?

Jón: The Faroese culture has largely been shaped by the challenges people have had to face in order to survive the harsh environment in a time of very few commodities. The unpredictable weather, the raging sea, the scarce resources, the isolation from mainland support, all these things have made it necessary for the population to stand together in all things. Being in such close quarters, people have felt joy and sorrow together, expressing themselves in songs, stories and myths. The resonance of this sometimes extremely difficult life is still present within the Faroese people today, despite having a modernized Western society, and it is inspiring us in a lot of different ways. Especially in regards to the myths that have arisen through a fear of unknown dangers, and the personal sacrifices people have had to make in order to brave the elements.

Your video for Frosthvarv was so masterfully shot. I loved seeing the landscapes mixed with the wonderful acting. I felt that this video demonstrated the failure to overcome one’s demons.  How closely does the imagery tie into the lyrical content, and would you care to elaborate on the theme?

Jón: Thank you! Working out the concept with director Franklin Henriksen and producer Beinta Haraldsen has been an incredibly interesting and cool experience, and the result they managed to produce is more wonderful than we could have imagined!

The film is broadly inspired by the main story of “Támsins likam” in that it depicts the main characters, their world and a version of their story. Of course, adapting a big, complex story to a five minute short film requires one to look at the narrative with the proper perspective, so it became very much its own thing, which can easily stand alone as an isolated piece of work. But since it is so closely related to the Támsins likam concept, we recommend watching it as an appendix to the album, and hopefully it will open up new ways to enjoy it.

The artwork for Támsins likam by Costin Chioreanu is especially fitting for the music. I also saw the video for Hon syndrast that he created for you. I feel that both the album artwork and the videos have helped illustrate the vision of your band. When you collaborated together on the artwork for the album, how much input did you provide?

TK: When Costin did the artwork for the album he asked for an explanation of the concept behind the record and the music. He then spent a few days listening to the music and reflecting over the concept and then created the artwork based on that. We didn’t have any direct input. Costin just created the artwork and we were floored by it so we didn’t really need to say anything. It was the same with the video for “Hon syndrast”, Costin got the lyrics, the explanation of them (since he obviously doesn’t speak Faroese) and then created the video for the song. And again, the video exceeded our wildest expectations. So we feel incredibly lucky to be able to work with such an incredible artist.

How is the music scene on the Faroe Islands? Is it a vibrant area for local music, or do you find yourselves as the lone group?

Jón: Considering the small population, there is an exceptional output of music here. There are at least ten bands and artist that regularly do international tours, which is a lot out of a population the size of your typical smallish European town! Our biggest artists include Teitur and Eivør, who are recognized pretty much worldwide. In metal, we have a relatively big outfit called Týr, who play a kind of folk/heavy/power metal hybrid inspired by our heathen and Viking origins. Other upcoming and promising metal bands include the weird Iron Lungs, the thrashers of Asyllex, and Svartmálm, a blackened doom band that will be joining us on a short tour in Denmark at the end of February.

Congratulations on your recent signing to Metal Blade Records! I am truly hoping that we will see you guys stateside in the coming months.  You have a pretty heavy European tour in February 2018. Are there any touring plans here in the US that you can elaborate on at this time?

TK: Unfortunately there are no US touring plans yet although we hope to be able to make it across the pond sooner or later. Touring the US would be a huge milestone for us and a dream come true, and signing with Metal Blade should definitely help with that, so keep your fingers crossed!

I just want to honestly tell you that I am in love with Tamsins likam. It has been an absolute pleasure to get a chance to talk to you guys, and I wish you nothing but continued success in the years ahead! Thank you!

TK: Thanks again for the kind words and thanks a lot for doing the interview!

Jón: Thank you very much!