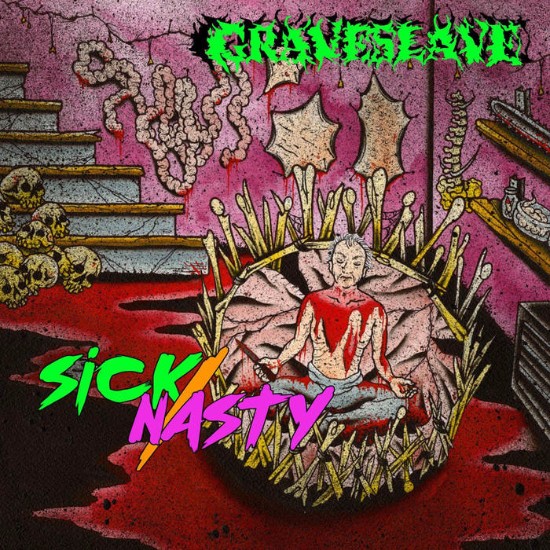 I present to you, the reader, an album chock full of what I can only explain as conundra. ‘Conundra’ I hear you cry? Well yes, this album delivered by Graveslave from the Twin Cities of Minnesota contains more than one conundrum, henceforth making it worthy of the use of such a word. Let me explain.

The first thing that is going to grab you is the cover art, and unless you are a huge fan of this band and it doesn’t worry you, then it MAY well make you wonder just what the heck is going on. Death Metal albums have been known to contain some of the most incredible artworks known to man, this one has, well, a very odd cover containing imagery that is suitable, and a lot of colour. Suffice it to say that I will let you be the judge, but if I picked it up at the record store, or however you buy your tunes, I would probably flick past it.

How does it sound though? The only answer is like Death Metal. Nothing here is going to change the world, but it is actually pretty good. Guttural Vocals that sound not unlike a Demon born to possess or a man throwing up into a very acoustic toilet. On one song the band even breaks into the Old School chanting chorus thing so beloved of early days Thrash Metal bands. Chainsaw Guitars, blasting drum beats galore and a bottom end heavy enough to be called a Booty. Not too bad at all.

On the odd occasion they even break into some quite lovely slower pieces, although I felt that occasionally they almost seemed to falter just a tad. You probably may not even notice. For the full on Old School effect, they even chuck in an instrumental piece, something that was pretty much a given back in the day.

This album isn’t going to change the world by a long shot. For the squeamish I advise you to go nowhere near the lyrics as they are about a murderous bastard who likes nothing more than words that start with D: Dismemberment, Disembowelment and general Devilry that you may find Disgusting. I found them amusing but that’s another story.

Recommendation:This will appeal to a lot of you, and not others, but apart from a few small problems, it’s at least worth a listen.