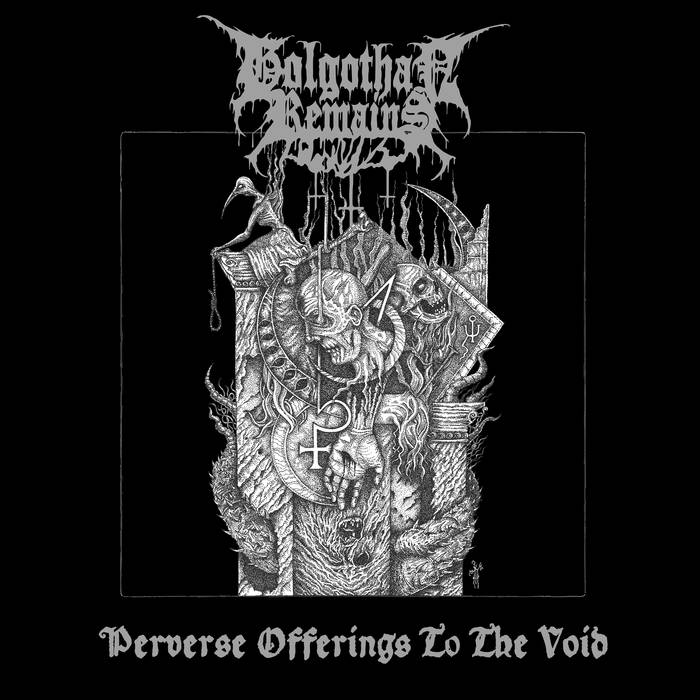 Album – Perverse Offerings To The Void

Australia is fast becoming the land of opportunity when it comes to metal, almost a renaissance of sorts for mine. Having lived here for quite a long time (like, since I was born to put it into perspective), I know we have had periods of drought. Yes there has always been a scene and some damn fine bands, but at the beginning it seemed we always had to look elsewhere for our next great find.

Over the last couple of decades or so things have improved way beyond all proportion, and not only are our bands getting signed left right and centre by some kick arse labels, they are getting more and more exposure. That is how it should be, because a lot of them are not only fucking brilliant, they are world beater class.

From the beginning with bands such as Armoured Angel, Alchemist and Hobbs Angel of Death through to Cruciform, Sadistik Exekution and even Mortal Sin we have always been able to hold our heads high on an international level and say fuck you to the rest of the world. Anything you can do we can do better.

Don’t get upset if I didn’t mention the outright strangeness that is Portal or the odd time signatures of Cauldron Black Ram, nor the melodic excellence of Be’lakor. The black metal scene is also doing quite well with Norse as well as Somnium Nox, and doom is well with Futility and Illimitable Dolor. I’m not even going to bother covering the rest. Someone will no doubt get their little winky out of place and get all uppity but this is just an overview. Get to the point and get to the review you say and yes I shall.

Golgothan Remains formed from the ashes of various other selected names in 2015. They then released a demo which was self titled in 2016. It is free on Bandcamp, so got get it and then come back and tell me it is not excellent. They then got down to the nitty gritty of writing this full length we have before us now. They have played with a few big acts such as Blood Incantation and Mournful Congregation. How do I know this? Because they told me so, and they are quite nice guys.

The nice guys part will be well forgotten when you hear what they have on offer here. This is just simply kicking the doors of death metal down and leaving a calling card. I have to admit it took me a few listens to get it all into my head. Complex song structure that leads into the more comfortable, then goes right back to pounding you in the head with the intent to leave you lying on the floor with the shit kicked out of you.

Classic moments of chunky riffing give way to blast beat frenzy, the vocals are nothing short of guttural hate that is almost otherworldly. Sublime for a second in nature the music can seem, but be prepared my friends. This is no work of kind folk, this is evil in its purest form. It will let you breathe for just a moment before forcing your head back into the fray. You kinda deserve this anyway. You have needed a good punch to the kidneys for a long time.

Highlights? There are none to point to really. The whole thing from start to finish is a highlight in itself. You won’t find yourself hitting the skip button or nudging the needle along. The songs blend seamlessly into each other in a whirling maelstrom of organised chaotic deathly awesomeness. If that makes no sense, it will when you hear it, trust me. I can’t get enough of it.

Golgotha, referred to as a place near Jerusalem, where a certain man may have been hung up on a cross of wood. The place of the skull. The remains have never been found. Maybe it was all a fairy tale, but rest assured that this band have not only produced an album that will remain in your mind for a long time, they have joined the Pantheon of Aussie greats.

Recommendation –  You will remain entertained by this for a long time. Welcome our new gods with open arms.