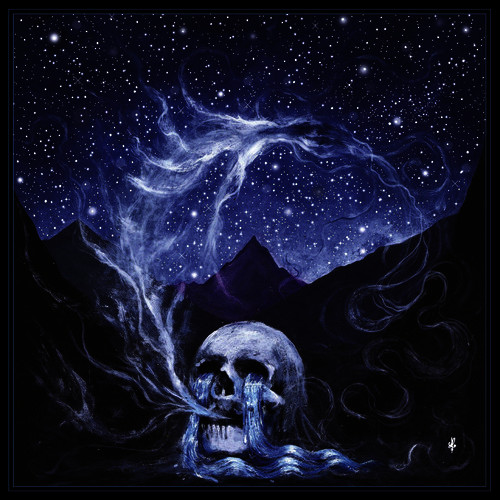 From their own Facebook page, “Ghost Bath refers to the act of committing suicide by submerging in a body of water.”  I feel that this sets the tone perfectly for what this band encompasses. Their latest release Starmourner is the soundtrack to desolation. For a band that considers itself “depressive”, I find their music quite beautiful and uplifting.

For those unfamiliar with the group, I feel that this might be an unusual experience. The vocals on this album are unlike anything I’ve heard released. In exchange for the customary monster/ witch/ demon vocals, Ghost Bath opt for a literal wailing. Imagine the sound of someone driven to madness through the loss of hope. This is actual howling recorded, and it truly makes for an interesting listen.

Musically, Starmourner is all over the spectrum, yet cohesive. Opening track Astral is a piano arrangement that sets the stage for the remainder of the album: haunting, beautiful and melodic. It moves seamlessly right into the following track, Seraphic. The whole album flows from one song to the next, each a required piece to the bigger picture.

My favorite track on the album, Ethereal is perfectly titled. The song is a shoegaze/ post metal masterpiece that is extremely triumphant.  While the mourning vocals could certainly be considered depressive, I find that as a whole, you’d be hard pressed to find a more beautiful uplifting release so far this year.

But this album is not all sunsets and deep thoughts. Track Elysium picks up right where it should and sets the stage for the final act. Right up until the closing track Ode, this album is a journey of reflection, introspection and serves as a gorgeous soundscape. I feel that this album is going to be divisive on several levels. It’s not a true “anything”.  It has elements of so many different genres, that I think it’s going to appeal to anyone with an open mind regarding what genres belong in heavy music today. With that being said, I enjoyed this album quite a bit, and cannot wait to see them in Grand Rapids September 15 at The Intersection!

I was fortunate enough to be granted an interview with ghost bath! Please read the attached below.

Ben: On behalf of Moshpit Nation and myself, thank you so much for taking time out of your busy schedule to talk to me!

Ghost Bath: No problem, thanks for the interview.

I love your new album “Starmourner”. As usual, you guys employ beautiful passages before the maelstrom and think that this really adds to the dynamics. I hear some darkwave undertones in your sound. Do you have any artists outside of metal that inspire you?

Recently I’ve been listening to vaporwave, hypnagogic, dark ambient stuff. Just really out-there electronic music that makes you feel like you’re in some future city on a distant planet -takes you to another world.

On the latest single “Thrones” I feel that this song is a triumphant departure from some of your more familiar morose soundscapes. Are you exploring the idea of branching out and evolving your sound, and do you feel your success has contributed to this change?

I wrote the album before I even began talking with Nuclear, so I would say no to the success contribution. I’ve had the idea for this trilogy before I recorded Moonlover, so the tragedy concept of Moonlover was always supposed to be contrasted by the ecstasy in Starmourner.

I feel that in your music, your vocal delivery is about as close to actual mournful wailing as I’ve ever heard. It makes for a truly moving experience steeped in sorrow. Does this make recreating that emotion in live performances difficult?

Yes and no. As far as my physical throat it can get difficult after so many shows. I’d like to think that I’ve figured out a way to do it where I don’t destroy my voice but sometimes it can get weak.

As far as getting myself back into that emotional state while playing, the second I step on stage I can feel something change and I am totally focused and in the moment. It’s weird because even while the intro is playing and the other guys have gotten on stage, I don’t really feel it until I am physically up there.

Here in the States, you are currently touring with the fantastic Astronoid. I think this is a great lineup! Did you have a hand in picking them as touring mates?

So in preparation of the upcoming release “Starmourner“ out April 21st,  you guys have some extensive touring coming up, which will see you on the other side of the globe! Which show or festival are most looking forward to in Europe?

All of eastern Europe, and all of Scandinavia. We haven’t been to those places yet so I am excited to see them. I guess the UK as well as we only had 1 date there last year and this year we are there for over a week. Hellfest also looks like it’ll be a good time.

Do you guys have any outside endeavors that add to the musicality behind ghost bath?

Not sure exactly what you mean here. I think we are all into philosophy as we discuss and debate in the van quite often. I also have a degree in psychology which I think helps frame a lot of my thinking.

I read in a previous interview that you feel that Ghost bath is the type of band who constantly move on to your next work. Is there already material written for the follow up to “Starmourner”?

This is the first time I’ve actually taken a break from writing for Ghost Bath. Instead of me writing the material all by myself, I think the idea is to write the last part of the trilogy as a full band and we’ve just been too busy to get started thus far. That’s not to say I haven’t been writing music as I’ve written 4 albums by myself in the meantime of various genres.

“Moonlover” and “Starmourner” were produced by Michigan’s own Joshua Schroeder. How did your relationship with him begin and how do you feel that he added to the recordings?

Our friends in Vendetta Spoken (an old band from North Dakota) had recorded with him and so I actually recorded an album with him for my previous band. When I had Moonlover written, I knew I wanted to go back. I think he adds a lot of ideas and a different perspective to black metal than a typical black metal producer.

Do you feel that your surroundings contributed in any way to your developing sound? I think it’s unfair to label Ghost Bath strictly as a black metal band, but one of my favorite aspects of black metal is that the artist’s environment can become an unspoken member or theme.

I think my inspirations come mostly from internal thoughts and emotion. So I would say my actually surroundings played very little role (as far as I’m conscious of.) Maybe that differentiates us from a lot of black metal.

I have been a fan of yours since I first heard Moonlover. My friend Andy introduced me to you guys, and I have been hooked ever since. He wanted to ask about the the origin of the “Moonlover” album art. Was this something original to the band, and what was the inspiration for this incredible photo?

The photo was taken in 1989 by Luis Gonzalez Palma, a Guatemalan photographer who now lives in Brooklyn, NY. I had the album written, the concepts in place, and I was googling things for ideas when I found the photo and knew immediately that it was the one. I emailed Luis and he was kind enough to allow us to use it in exchange for sending his son a copy of the album.

Thank you so much for taking the time to answer our questions, and we will hopefully get a chance to see you when you swing back around this way! Safe travels!

No problem. Thank you very much.