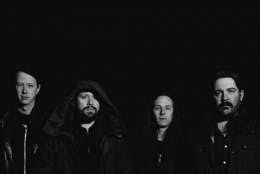 I won’t say too much about this here, but we were able to capture an on-camera interview with Huntsmen. For several reasons, this was a particularly excellent interview. It started with a brief conversation in the parking lot immediately after we arrived. The band was waiting by the van watching some locals march through after being asked to leave the venue for chanting ‘Build the wall!’ It was the locals chanting, not the band. This gave us ample cause to discover we were on a similar page politically. Another difference was the fact that all four members of the band joined the interview. In addition to this, their answers were thoughtful and interesting. The interview itself will be coming to YouTube soon. We’ll share the link when it’s posted. 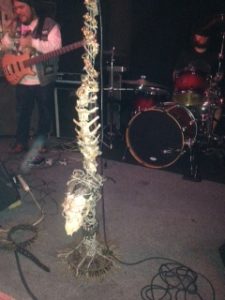 Always bringing the atmosphere, the local openers Discarnatus started things off with this conversation piece. The microphone stand was hand made by Jordhammer the vocalist and featured what looked like an animal skull and spine attached by barbed wire. The base was surrounded by nails attached with the sharp end out. Gnarly!

Speaking of Discarnatus, we here are big fans. This was my sixth time or so seeing these locals who play a midpaced blackened death metal that just burns with venom. They once again called forth sonic demons, but see no reason to pick up the pace to frenetic, as the end is inevitable anyway. On this night, they played four new tracks which have yet to be recorded. It’s been fun to see the growth of this band as they continue to tighten their sound and come into their own.

So, you all know that the metal scene in Minneapolis is pretty untouchable right now, right? If not, tune in. There are so many stellar bands coming out of the Twin Cities and surrounding area that it’s hard to know where to begin. (though you can ask me if you’d like some suggestions) Perhaps that’s why I haven’t heard more chatter about the excellent doom band Livid. They are maybe just awash in the flood of excellence. There needs to be more chatter though. The quartet gave a hypnotic and oppressive performance that washed over me like being caught in a wave of onrushing Mongol warriors. Absolutely punishing.

I’m not sure I have enough words to say about this band. In the span of about a week, they went from being a project I’d never heard of to a band I’m obsessing over. I won’t waste too many of those words here though, as I’m going to be writing a full album review soon, publishing a video interview we did with them, and sharing a video from this live set. The band played their new album (minus the interludes) front to back, and then ended with The Colonel from a prior EP. Their set was tight, clean, and completely on-point. The drummer, Ray Knipe is a Michigander transplanted to Chicago, and drew a homer crowd, which helps, but the band provided all the energy necessary. A truly exceptional performance. Huntsmen will be a band I see every chance I get.