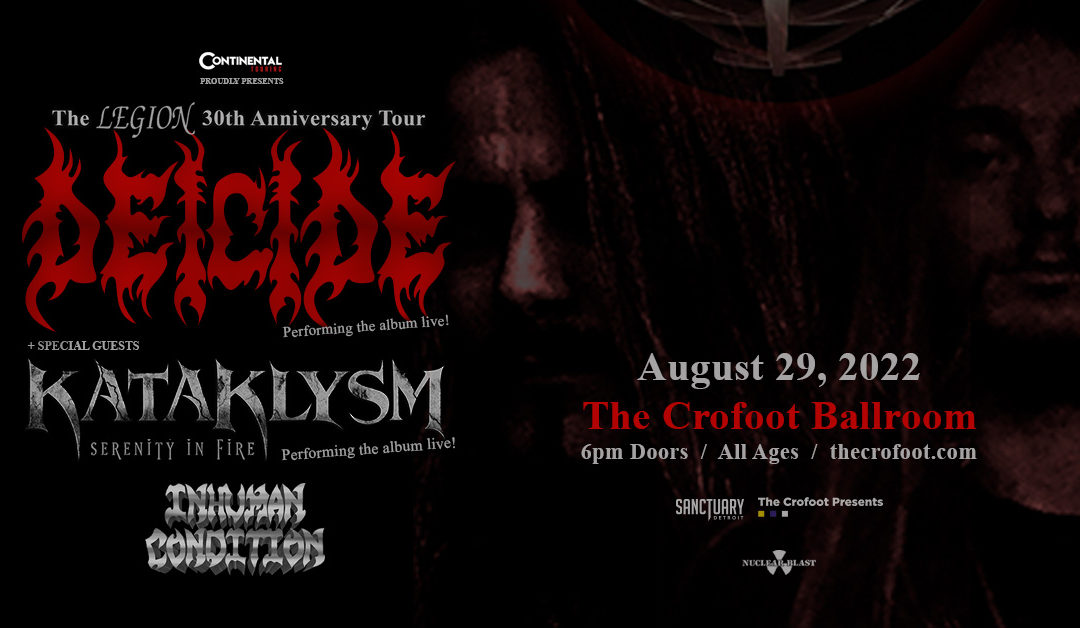 Sanctuary Detroit and The Crofoot Present:

Tickets are on sale now.

Deicide will be performing the Legion (1992) album live!

Kataklysm will be perfroming the Serenity In Fire (2004) album live!

DEICIDE: A punishing American death metal group with a penchant for pairing uncompromising decibels with controversy, Deicide emerged in the late 1980s alongside contemporaries like Cannibal Corpse and Carcass. Based out of Tampa, Florida, the band poisoned the mainstream in 1992 with their sophomore effort Legion, which became one of the best-selling death metal LPs of the Nielsen Soundscan era. Employing a lethal mix of sonic heft and Satanism, Deicide’s championing of animal sacrifices and anti-Christianity rhetoric yielded attacks from religious organizations and animal rights groups — bomb threats from the Animal Militia culminated in an explosion at a Stockholm venue in 1992 — and helped make them one of the more prominent social and sonic antagonizers in the ’90s death metal scene. The group continued to mine the depths of depravity and despair well into the 2010s, occasionally tempering their death metal assault with forays into more melodic forms of extreme metal, which they did in the late 2000s, but 2013’s In the Minds of Evil and 2018’s Overtures of Blasphemy marked a return to the brutality of their Legion days.