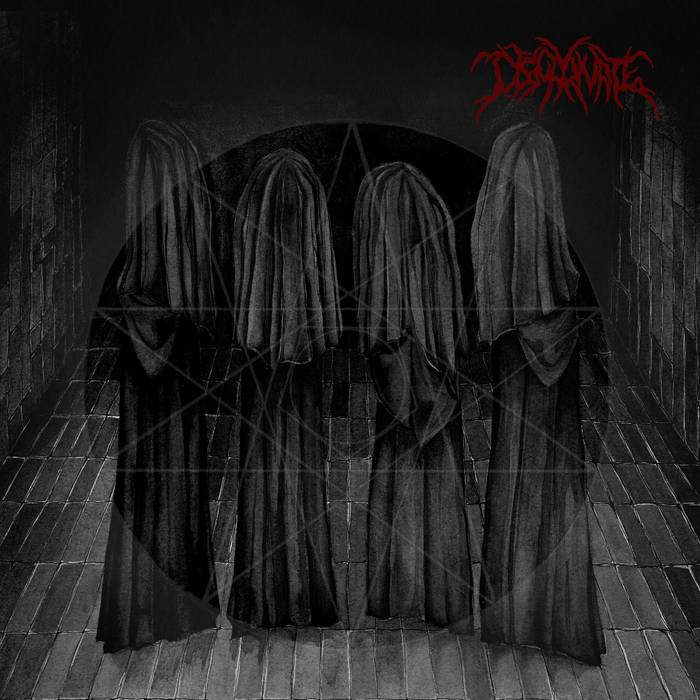 Local underground stalwarts Discarnatus first appeared on my radar when they played at the massive Michigan Meltdown at the Deathhouse here in Grand Rapids during the summer of 2015.  In contrast to the other bands playing (French band excepted), they added some showmanship to their set.  Vocalist Jord Hammer came out with a black executioner’s hood on and kept it on for most of the set.  They also had some of the coolest merch (Discarnatus candles?  Awesome!)  To top it off, they played a blazing set featuring a solid mix of black and death metal.  Since that day, I’ve seen them four more times.  Each time they bring it, even through name (they started as Discarnate) and line-up changes (the bass player has changed since that day…I’ve seen them three times with the former bass player and twice with their current bassist).  It is long past time for me to write something about this band.

Discarnatus is like a re-animated corpse with blackened, putrefying flesh layered over a skeleton of death metal.  Rusty provides plenty of blasting intermixed with solid driving rhythms as he hammers the skins.  Adam alternates between pummeling death rips and rending tremolo picking to great effect.  From the bass, whether its their former bassist whose name I don’t know (sorry dude) or Monte (who seems to be in about a thousand local bands), you get pulsing riffs designed to destroy.  Finally, Hammer’s vocals overlay everything like a swirling vortex of gnashing teeth, alternating between deep, throaty growls and heart rending shrieks.  The overall effect is ominous and doom laden.

Recommendation:  Support the underground!  You can’t go wrong with these guys.