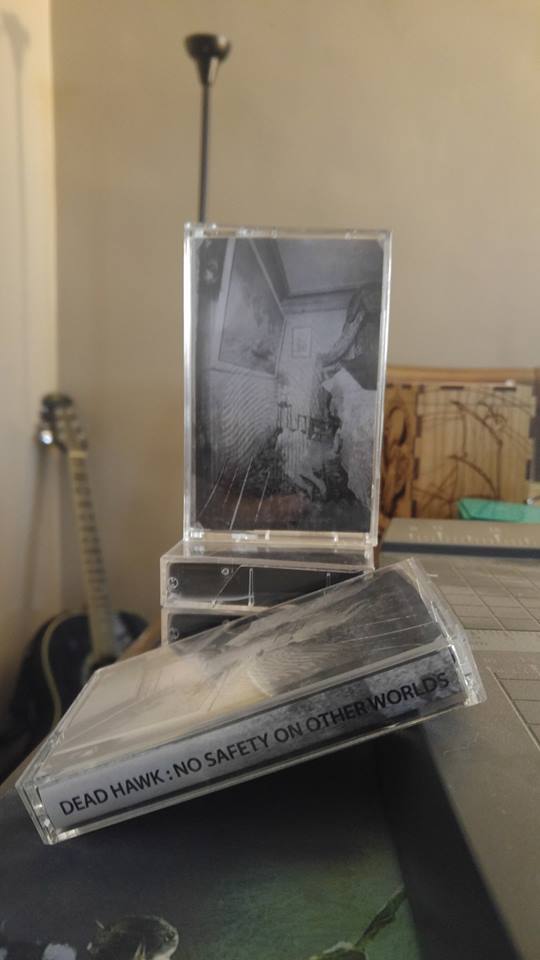 Dead Hawk – No Safety On Other Worlds

Album – No Safety On Other Worlds

We have never reviewed a lot of noise as a genre here on Rage and Frustration. Part of it is that there hasn’t been a lot of experienced noise listeners, so to speak, though I have the sense that JDecker might be able to shed some interesting light on the genre. Another part of it is that we have not received much in the way of noise submissions. Recently, however, I made a connection with Mark W, the one man behind the one man project Dead Hawk. He sent over the upcoming release called No Safety On Other Worlds, a two sided, two track cassette to be released in a very limited quantity this Saturday. Before I start discussing the sounds I hear, let me remind you that I have little to no context in which to place the release. I can however tell you about what I hear and how it makes me feel.

Up first, No Safety On Other Worlds Part 1. The release starts off slowly and quietly, with low ambience that sounds like haunting keyboards before devolving into a musical deconstruction of these (and other) tones. This early minute plus is as close as Mark comes to what so much of the world thinks of as music. From this point on, the sounds become near elemental in their effect. At times, severe windstorms come to mind, while at other times, he calls to mind something more earthen. The effect is darkly contemplative. The initial quiet draws the listener into an atmosphere that slowly leaves the serene for something harshly beautiful, though quite possibly toxic. Eventually the track devolves into unstructured tones and moans scattered together with static, as if one was pulling apart and examining a piece of the fabric of the universe.

Flipping the cassette, (metaphorically, at least) brings No Safety On Other Worlds Part 2. This side of the cast picks up where the first side left off. That is to say, we are right back in the realm of deconstructed depressive madness. In some ways, side two is a reversal of the first. It slowly builds itself back up into some semblance of coherence, including the use of some not quite out of the background samples of talking. I did catch something about Jeffrey Dahmer in there, so the samples are certainly dark. However, instead of building back up to a sense of musicality, side two becomes more harsh, more full of abrasive static, more destructive as it proceeds into the realms beyond.

In the final analysis, Dead Hawk has created a space outside of music, and possibly outside of our reality, in which to provoke passion and angst in our psyche. I don’t know what this sort of project is supposed to sound like (if anything at all…is there a specific noise sound?), but I do know nineteen or so minute release is engaging in an emotional and ultimately disturbing sort of way. I’m pretty sure there are moments when the creation speaks directly to my lizard brain.

You’ll have to wait for the cassette to hear this one, but in the meantime, here’s a May 2017 Dead Hawk release to check out.

Recommendation:  Support the scene! (especially when it’s this good)