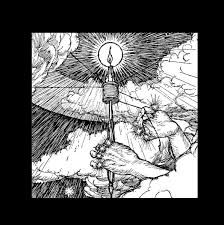 Even on the band’s first release back in 2014, Dakhma showed that they are a force to be reckoned with.  Since those early days of blackened crust, the three-piece (mostly) has evolved into a black metal band with heavy crust influences.  Suna Kulto brings essentially a full length album in two songs.  On one side, there is Coins coming in at 21:26 while the other side features East at a mere 20:14.  That length suggests that the band is playing atmospheric black metal, and they are in the sense that they definitely create an atmosphere, and they do indeed include brief passages which are both slower and more melodic.  What the band certainly is not, is soft.  They have all the intensity of a fully loaded freight train bearing down on you.

Let’s consider East first.  As I understand it, this song is thematically about the depression of winter (found in abundance here in Michigan) and the longing for sunlight.  There are all sorts of metaphorical leaps you could make here which play off that theme.  For me, this track feels more gray than black.  There is perhaps the embers of a fiery anger, but generally it’s filled more with melancholy than rage.  The predominant black metal parts, full of biting wind and fury are more bitter blizzard than hot destruction.  There is passion, but it’s the passion of 100 mile per hour winds and the stinging bite of ice pellets.  The calm in the more sedate sections is the calm of being trapped under the ice after falling into a frozen lake, turning slowly blue.  The ache for death also suggests the ache for rebirth.

As amazing as East is, it’s really on Coins that Dakhma fully blossom.  I have been a fan of the band since shortly after the release of their self titled demo.  I’ve seen them live seven or so times.  Through their already prolific career, this track is my favorite.  Part of that, I know, is the theme of the lyrics.  Coins is a siren call against the horrors of fracking and against the hypocrisy of a so-called Christianity which puts the needs of profit ahead of the needs of humanity and the earth.  Both are themes which I stand behind one hundred percent.  Musically, the track is also a masterpiece.  Dylan’s drumming is so nuanced as it controls the passion of each moment, driving it forward with chaotic blasting or reigning it in with quiet, contemplative strokes.  Derek has also outdone himself in his composition of guitar tones and riffs.  They ache with passion, rage, sadness, defeat, and horror.  Likewise, Claire puts in a top level performance vocally.  There are stretches in this track where is feels like she is channeling a very pissed off Mother Earth rising to rid herself of the disease of mankind.  Claire’s live performance on this track only serves to heighten this perception.

I’m excited to see what comes next.  Not only has this band evolved in dynamic ways and grown in terms of both composition and playing, but they have just added a fourth member.  Since the release of Suna Kulto, Jimmy (former Old Soul, current Niboowin) is joining the trio on guitar.  I’ve been fortunate enough to catch the new line-up live twice in the last month and feel certain that he is a worthwhile addition.