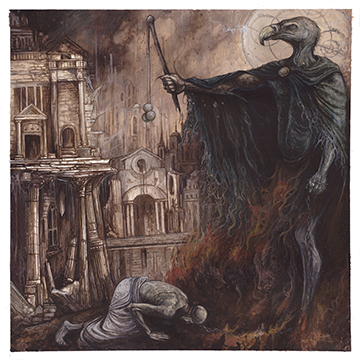 Craven Idol – The Shackles of Mammon

Album – The Shackles of Mammon

Benjamin brings us an interview of Craven Idol as well as a review of the upcoming album.  Enjoy!

Ben: I see you guys have a huge show at the North of the Wall festival April 14 and 15th. Any plans to bring a tour to the States?

Miika: Just a few handpicked shows as usual! We have a release show booked in Camden the week before and another London show in May (and a good few offers on the table thereafter). We have had a few contacts from the States but none of these have materialized as yet. Of course, being on the US label Dark Descent, we would love to make the trip over at some stage!

I hear a very strong old school metal sound in your album. Did you use modern equipment at Priority Studios on the recording or did you employ more vintage gear?

Priory Studios has an excellent selection of equipment available. We used some classic heads for this one and very little studio trickery. It had to sound like a band playing, not some sort of perfectionistic strive to be an android. As far as I’m concerned, music is all about the blood, fury, and thunder – the ultimate passion and complete release of the soul. The performances communicate this more than anything, and we didn’t want to tarnish that in any way.

Where do you usually gather songwriting inspiration? What is your usual songwriting process? What are you currently working on outside of Craven Idol that helps contribute to the music?

My song-writing process is a peculiar one, and can be particularly frustrating. I go through frenzies in which I create several songs, if not entire albums, and then the muse just dies off… perhaps for months, even years. I don’t seemingly have any control over it, but I try my best to trigger it by keeping the mind active. I would say that inspiration from literature (Vonnegut, Bester, Bukowski, Owen), moving pictures, (Wiene, Bergman, Mayall) and the arts (mostly Otto Dix), is just as important as music (Master’s Hammer, Bathory, Sodom, Poison from Germany). I let writing take its time – I rush for none but death. Anyways, when I do eventually manage to put together a few drafts, I bring the tracks to drummer Heretic Blades and we jam them at length. The song then develops organically with the rest of the band joining in…

Outside of Craven Idol, I’m also part of several other bands, which helps me immensely in broadening my horizons and learning different playing styles and techniques. For this very purpose, I’ve also learnt a few unrelated instruments recently (ones I would never use in the band, like the Irish Tin Whistle) just to discover a new dimension of sonic matter. Besides of that, I also take vocal lessons from time to time to broaden my range… the abundance of falsettos on ‘Shackles…’ is certainly testament to those (as I have a very low voice naturally).

I absolutely love the incredible album art by Daniel Corcuera and I feel that it totally ties in with the album’s theme. Was the image something that you collaborated with, or did he use inspiration from Schneider’s wood carving on his own?

It does tie into the album’s theme fully. To me, a successful release is part of one whole (especially on vinyl, which is my preferred format). We worked closely with Daniel in establishing what we were after, which was to combine Sascha Schneider’s 1896 wood carving ‘Der Mammon Und Sein Sklave’ – which we brought to him as a base – with his unique style; with plenty of relevant imagery blended in. We did send D all the music and concepts initially, from which he produced a number of incredible sketches, a number of which appear in the CD booklet and our new shirt design. The cover itself, delves deeper into the lungs of hell displayed on the sleeve of the previous album ‘Towards Eschaton’. We zoom in and discover ever darker lockers of the netherworld. We are presented with the giant figure of Mammon – the Demon of Avarice – as he holds over man’s head the measure of his dreams, the sum of his desires: currency. Flanking the famished mankind – kneeling, begging, starving – burn his tottering cities. In his mind he sees visions in flame, shackles that bind him to his master… Yet barely any of it is real. It is his creation. Neither Mammon, the shackles, the visions, the currency exists outside his head… outside his narcissistic greed. It’s his own web he’s wrought… and it consumes him.

Congrats on your longevity! I see you guys have been grinding it out since 2005. Any pointers for up and coming bands trying to claw their ways in the metal scene?

Sure, we’ve been round for a good wee while now, however, the band is more of an extension of who I am – neither I nor it could exist without the other. So in a way you are congratulating me for getting to the age I am now, ha!  The main pointer is to make the band about what you like fundamentally in metal/music. Not what you like at the moment, or what’s popular, because just like everybody else, you’ll get bored of it, and abandon it. As for clawing one’s way in the metal scene, your guess is as good as mine… it seems sounding like a poor man’s Incantation or Diamond Head helps.

What do you feel are the biggest obstacles for extreme metal bands trying to break out today?

The extreme metal bands are their own greatest obstacle. It’s those who conform to playing the ‘trendy thing’ whom make metal into the clogged up, rigid genre that it has become. Where sounding like someone else is celebrated, whilst originality is frowned upon. I’m absolutely not saying that we’ve reinvented anything, however, the things receiving acclaim today that are just slightly modified riffs from classic bands, are near comical. We are stuck in this loop of trends and it’s the direct opposite of what metal is about to me. It’s up to the bands and the fans to not buy into that shite. End of the day, metal is a lifelong passion and I wouldn’t say that we have ‘broken out’ in that sense… just play what comes naturally, even if everyone else thinks it’s awful. This is not a popularity contest.

For us over here in the states, what is the London underground scene like? Do you find that there are many like-minded bands, or do you find yourselves on mixed genre shows?

Both! London has a rich metal history and some of it is still alive and kicking, too. When it comes to mixed bills, we’ve played a few – always with bands we support though. We’ve done gigs with the likes of The Wounded Kings and also have an offer on the table to play with some amazing old punk bands later this year. But then, we are primarily lovers of first wave extreme metal, rather than close-minded black/thrashers, so it’s never a big deal. We do loads of gigs with the likes of Grave Miasma, Cruciamentum, Lvcifyre, so I suppose we gig mostly with death and black metal bands.

Looking at the bigger picture, London obviously get all the gigs. This is the biggest city in Europe, so the place to hit. We have killer shows from classic bands almost every week, and whilst that can make folks lazy, the support for the underground tends to be strong regardless. As far as band are concerned, the majority are quite interchangeable and boring, however, there is a new generation of kids playing some stuff with the right spirit.

What plans do you have to spread the word of Mammon in the coming year?

We are adversaries of Mammon, and we only spread his name as a warning, a cautionary tale… however, I fear we are too late. In the interim; stand strong against the raging tides!

Craven Idol has been at it for a over a decade churning out their brand of blackened thrash. Unrelenting and vicious, the Shackles of Mammon is a monster of an album. Right from the shriek introducing the album on “Pyromancer” to the punishing closer “Tottering Cities of Man”, Craven Idol offer a pummeling vision of bleakness birthed in the London Fog.

Toeing the darkened line between black and thrash metal, this album is difficult to categorize. I genuinely believe that it has something for everyone in the metal scene. My favorite on the album, “The Trudge” is a mid tempo stomper outfitted with incredibly catchy Gregorian chant. Make no mistake; this is a great listen with leanings in across the extreme metal spectrum. Do you like black metal in your thrash? Do you like thrash in your death metal? You should definitely check this out if it’s been a while since you’ve heard something released lately that is lacking that old school feel.

The production on this album is deliciously old school. That is not to say that this is another uninspired Bathory rip off. Let me clarify that there are plenty of new ideas on this album.  It just sounds timeless in a way that only classic metal can. Was The Shackles Of Mammon released this year, 1983 or some time back when evil ruled the earth? The answer of course is that the unsuspecting world will be shadowed with its pestilence on April 14th, but my point is that this album sounds like it could be 20 years old. This is going to satisfy listeners looking for that voice that has been eschewed in favor of more modern sounds.
This album caught me by surprise, to be honest. I loved the album art from the time I saw it, but wasn’t expecting a sound so uniquely vintage yet contemporary at the same time.  The Shackles Of Mammon is good old fashioned extreme metal, and without any frills or meaningless genre tags. It goes straight for the throat from start to finish, yet each track is not so similar that it proves to be a tiresome endeavor. According to their press release, “This album deals with the vices of man, the plagues they unleashed upon themselves, and the rationalization of its own actions – be it in tragedy or ruin – through the creation of deities and cults.” I, for one, am now indoctrinated into the cult of the Craven Idol, and welcome the rise of Mammon the Demon of Avarice!