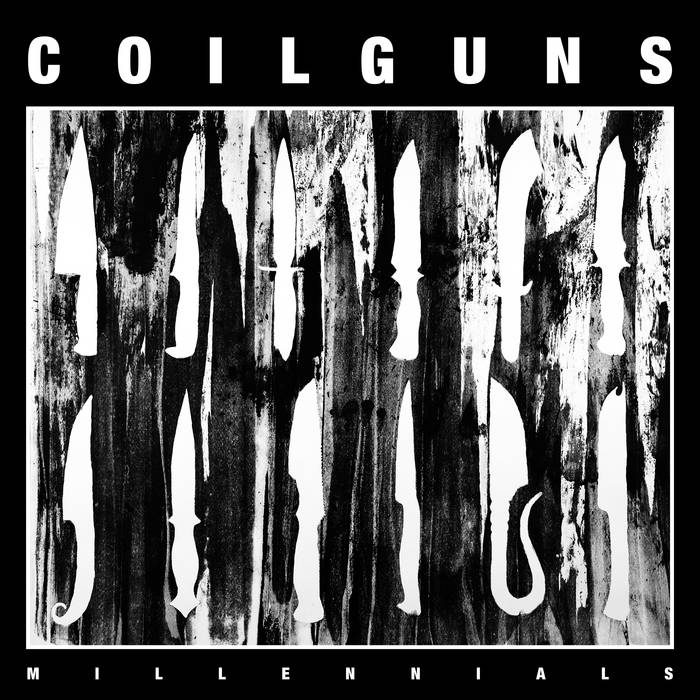 Chances are good that if you’re reading this, you might fit under the definition of a millennial.  Although I feel like the term should be used to describe people born after the millennium (how does that not make sense), it seems that it is more appropriately used to describe anyone born in the 80s or 90s.  Being born in the early 80s I suppose I drew the short straw and must deal with being lumped into a group of people known for being overly sensitive and offended by everything. Fortunately, Coilguns don’t have a sound that’s either sensitive or safe; instead they take their time to infect your mind with their brand of darkness, choosing to only occasionally go for the throat.

Things are off to an interesting start with an intro song that feels like it’s could also be an outro song.  It offers a glimpse of Coilguns’ sound for the rest of the album, and if you don’t like it you might as well stop there.  Most of Millennials is mid-paced d-beat with a hardcore edge, especially in the vocal department. Some of the tracks have an intensely wrathful mood to them, leaving me feeling as though I’m melting from within to a puddle of disgust.  The title track “Millennials”, which happens to be my favorite, begins like an anthem with a strong punk attitude, while being dirtier than the US government. It is a strong example of how great Coilguns can be at songs played at different tempos.  “Spectrogram” has a spicy drum roll that feels like watching a spectrogram, replete with a sinister atmosphere that consistently builds up, but sadly never climaxes. There’s a black metal discord to the riffs at times, giving them a harsher characteristic than what you’d generally expect from the style.

Although the meat here is d-beat, Millennials boils down a wider range of sounds to create a unique one I have had limited exposure to.  If there are other bands that sound like this, I am unaware of them. Unfortunately, the album as a whole feels disjointed and at times has left me feeling confused.  Although by sheer run-time alone there is plenty of music here, during a listening session I am left feeling that this is an album that is capturing a band practice instead of a cohesive collection of songs.  I don’t mean this in a negative manner, although I feel it is worth noting as this definitely isn’t something everyone will be into. It paints a true picture of who Coilguns are, and it works well for them.

I only wish lyrics would have been included with the promo, as I’d like to know if any sort of a statement is attempted to be made lyrically. Going by the album title I’d assume they surely have something to say.  On the other hand, perhaps they chose the album title to simply define their sound and throw us off by thinking there is any more meaning to it. While I can’t bring any examples to mind, Millennials definitely feels like something I would have heard in the 1990s.  If you’re already a fan of d-beat, then you’ll most likely appreciate this. This album could also be considered a good starting point for those who are interested in the style but want to hear it with more extremity.