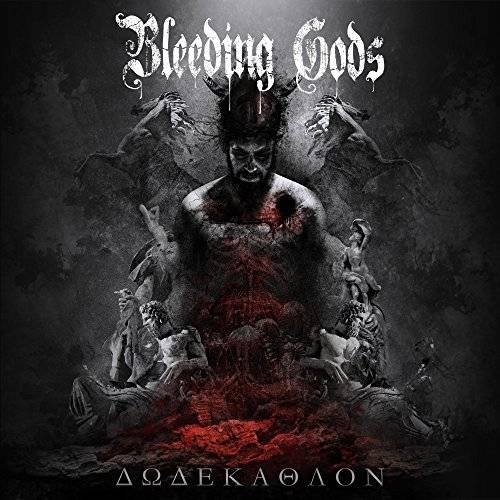 It took 14 seconds for this album to hook me. 14 seconds. At 14 seconds into the first track, which starts with a single ominous note hovering in the air, the first earworm hits with a vengeance. It’s like that moment as a fisherman when the fish hits the lure. If you time it right, you jerk the hook, thus setting it, and the fish is yours, though it knows it not yet. Except in this case, Bleeding Gods represent the fisherman, and you are the fish. The album, an ominous journey into the world of the Greek gods, has you hook, line, and sinker.

Hailing from The Netherlands (another nation I shall have to start to watch more closely based on the amount of recent quality metal calling that European nation home), Bleeding Gods play fairly polished symphonic death metal that is epic and scope, yet remains every bit as brutal as it needs to be to drive the nail home. Polished, in this case, does not mean castrated. The production value and symphonic flourishes serve only to allow this monster room to roam and destroy. Calmer, prettier moments are the bait, but the end result is the handle of a hatchet smashing down on your little fishy head.

Rarely do I talk about a single track in my reviews, preferring to focus on the album as a whole, but From Feast to Beast deserves some special attention. The riffs on this track are particularly grimy and dissonant. The symphonic keyboards sound like something from a nightmare, the soundtrack to a chase scene as you seek to escape from some shadowy horror. While I find this whole album exceptional, this track is on another level. Were I to list my favorite tracks from a given year, I believe I would be hard pressed to find a more deserving number one for 2018.

Recommendation:  How much more do I need to rave about this?  Go buy it.