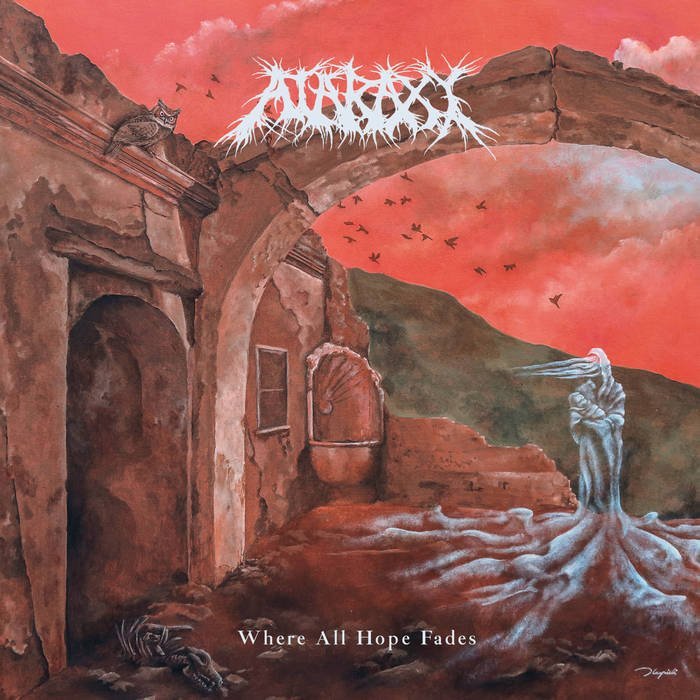 Ataraxy – Where All Hope Fades

Album – Where All Hope Fades

With their third installment, Where All Hope Fades, Ataraxy has really found their way. The album starts with a slow burning instrumental track to set the mood, and I think it was a good decision to go with an instrumental. After the mood has been set, the first single off the record, “Matter Lost In Time” comes on, and I start to feel as though I’m lost in this world that Ataraxy is painting. A world of long, dark caverns that I am trying to escape. The music is slow, but not one bit boring. The guitars are eerie, and remind me quite a bit of labelmates, Spectral Voice. Suddenly, the music picks up the pace, and so does a feeling of panic. The atmosphere is dense. It’s almost like I’m  being chased by something in this world in which Ataraxy has engulfed me.

Then we get to track three, One Last Certainty. The album is charging with a full head of steam now, and so am I. Again, the guitars are really the vocal point of this album for me. The tone, and trance inducing solos in every song are mesmerizing. The vocals are tortured, not quite as low as a lot of bands in this genre, but they take nothing away from the atmosphere. The drumming is very steady, and seems to be the glue that holds everything together, as they should. The bass is a little low in the mix, but that could just be my preference, because I like my bass high in the mix.

Track four is mostly a filler track that continues on the vibe of the first few songs. Following this, the final two tracks, which are my favorites. The Morning Path brings some eerie melody into the mix, as I continue on this dark and psychedelic journey. This song is so hauntingly good. It has peaks and valleys, and everything in between. It merges seamlessly into the album closer, The Blackness of Eternal Night, and by now the hairs on my arms on standing straight up. It starts with this slow picking on the guitar that just cuts through me, almost makes me feel weightless, and I just think to myself, “fuck, this album is good.” This closing track is everything I could have wanted. It leaves me wanting more, wishing the journey wasn’t coming to an end, and to me marks the sign of a good album, because I know I will be back to revisit it time and time again.

What this album lacks in speed, they make up for it with the haunting melodies and those mesmerizing guitars. I think this is a band that has really hit their stride, and put out one of the best death doom albums you’ll hear this year and by far the best album of their career. I would highly recommend this album to any fan of atmospheric death metal or death doom.