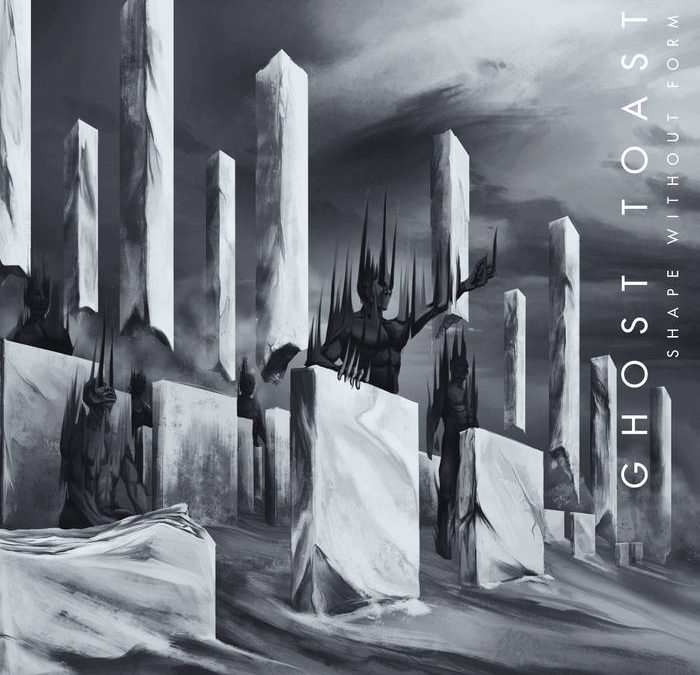 Mary Shelley knew where it was. Her creative powers summoned one of the most beloved horror stories of all time, Frankenstein. For this gift, we should all be eternally grateful. Metaphorically speaking, no one could deny the universal truth of the creation overtaking the creator. This archetype is perhaps best exemplified by the ubiquity of Frankenstein’s monster throughout popular culture. It is so popular that people mainly remember Frankenstein as the lumbering, undead giant with rusty nails pounded through his neck, but not so much his maker, Dr. Victor Frankenstein.

Similarly, “Frankenstein,” the opening track on Shape Without Form, seemingly acquires a life independent of its creators — Hungarian mad prog scientists Ghost Toast. Yes, this song, an exhilarating sideways roller coaster of molten metal riffs amid constant technical wizardry, is that damn good. This is not to diminish the significance of Ghost Toast themselves as the creators. On the contrary, these guys are nothing more or less than prog-metal alchemists, stirring their eclectic mixture of traditional metal, thrash, old-school progressive rock, ambient new age music, reggae, cinematic passages/spoken-word sections, and psychedelic explorations into a potent — if somewhat bizarre and unique — mixture. The concoction is powerful indeed.

Shape Without Form is a mostly instrumental, seven-track album of some of the most compelling prog metal this side of Dream Theater and Fates Warning. The band itself — consisting of guitarist Rózsavölgyi Bence, bassist Stefán János and keyboardist Pusker János, alongside skinsman Papp László — have been plying their trade since 2009 and over the course of four albums. Their collective musical experience and virtuosity is obvious from the get-go, beginning with the brilliant and exuberant “Frankenstein.” This album-opening gem starts with a melodic and brooding piano-based introduction before launching into a rapid-fire burst of metallic riffing and frenetic drumming. Thrashing grooves and a plethora of meter changes and shredding instrumental bursts flavor this masterful cut. The brisk follow-up to “Frankenstein”, the syncopated and aggressive grooving-riff fest, “Eclipse,” is no slouch, either.

Then, “Y13” gently arrives. A synth, electronic, and cello-based excursion into the infinite cosmic realms, “Y13” is as cinematic and psychedelic as it is technical. Simply lovely. “Hunt of Life” pushes the cliché of the envelope (what envelope?) even further with a reggae-based groove, albeit a spacy one ala Hawkwind with plaintive female vocals. Ghost Toast remain mellow on the arpeggiated intro to “Follow,” only to alternately crush the listener with some straightforward-yet-intricate metallic goodness. “W.A.N.T.,” a dynamic and percussive eight-minute epic, is much better heard than described.

One could criticize Ghost Toast for a lack of focus, I suppose. But then they’d clearly be wearing the wrong space suit. These proggy Hungarians are themselves, and that’s more than plenty.