Wind of the Black Mountains – Black Sun Shall Rise (re-issue) 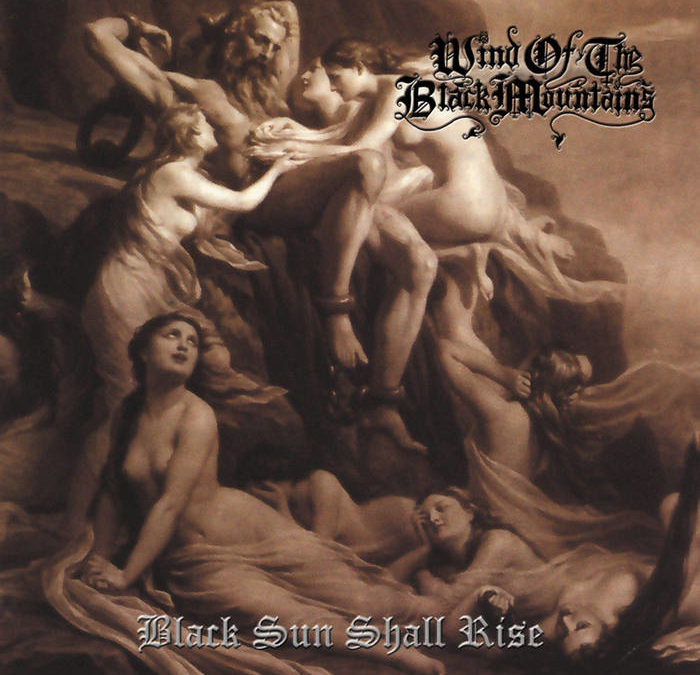 Band – Wind of the Black Mountains

In the black metal scene, we can proudly count a Michigan band among the founding ranks. Wind of the Black Mountains is a legendary underground band that set the bar and tone for the blueprints of modern USBM.  This release is a history lesson and also a celebration of late guitarist Tchort.

Black Sun Shall Rise is a terrifying journey into the darkness. Brutality abounds from the start. This unrelenting album crushes from start to finish. Growing up in the Michigan Metal scene, the legend of WOTBM has certainly been discussed many times over the years. I am fortunate enough to share family with drummer Nybras, and this is incredible to see their journey roll out full circle. I am so stoked to finally get to review this album in its infernal splendor This is mandatory listening for anyone interested in primitive US black metal. This is the sound of Michigan metal history, and all hail the resurrection.

The samples on opening track Blackest pitch sets the tone appropriately for this release. It is that kind of buzzsaw grinding black metal that I crave. Brutal to say the least, this is the kind of release that fans of true BM will enjoy. Follow up track Bride of Lucifer starts off with a terrifying sample of what could only be described as a slaughter in Hell before lunging from the shadows most viciously. This is the sound of the beast awakening and reclaiming the throne. There is an eerie clean leading into the track L.U.S.T. that creates tension perfectly. Overall, this is a very solid release from start to finish. It paints a bleak picture of a blood soaked revelation in the dark days to come. I loved the groove on track An Autumn Evening. Even though the drums and guitars move at a frenetic pace, the band is not afraid of dynamics, but letting off the tempo to build, before pushing full steam ahead. Like a relentless force, this album jumps right from the gates into as visceral punishing that lasts a powerful thirty-five minutes. Finally, the album closes with a Sodom cover featuring an extremely eerie instrumental electronic atmosphere. Overall, this is required listening for the cult. If you have been wishing for something meaner and scarier in your black metal, then look no further.

I was fortunate enough to get an opportunity to discuss the album with founding member Nybras (drums) and Xaphan (vocals). The interview follows below:

BB: Why don’t you tell a little about how the recording started? When did you join the band?

Xaphan: I wasn’t an actual member of WOTBM. I was in the band Masochist with Tchort (guitars) in 1994/1995, and was around when he started his one man side project WOTBM. His friend Tim Lau owned a studio and the two made the demo and first album. Once Masochist split up, he made Wind of the Black Mountains a live band. The second album is when Nybras joined. They wrote a few new songs and re-did some old Masochist songs. So when Tchort passed in 2006, we did a tribute show of Masochist with Nybras on drums. He recruited me to help finish three tracks Tchort had started; guitars but no bass, drums and vocals and some intro stuff. As well as an unfinished song from the first album/demo sessions. So I was never a member but an old band mate and friend that could help fill in the spots where Tchort could not.

Nybras: After Jeff died, Satanic Steve (as Nunrapist), found some old rehearsal recordings of unrecorded material with only guitar and some sporadic vocals here and there. The timing was a bit off on some of the riffs, but it was enough to work with. We had originally recorded along with them ten plus years ago, sent the session to Moribund, and then I honestly forgot about them after that, due to always being busy with Genocya and my kids. I was notified in fall of 2019 that Moribund was planning on releasing the new CD, so Xaphan and I got together once again to try and do a better job at it. It took two days to finish everything and get a better sound to the label. Jeff had asked me about playing drums on WOTBM back in the early 90s when he did the first demo. At that time I was busy with Left Hand Trinity and Production Grey and Bombjack, plus a couple other little projects. We talked a few times over the years about it and I finally joined WOTBM around ‘99, I believe.

BB: Xaphan, as a multi-instrumentalist, did you have any input with the creation of the music?

Xaphan: I didn’t have input on making the music. Just my musical sensibilities as Tchort and I had great respect for one another. I did choreograph the acoustic Bleed For Thy Sins with acoustic guitar, keyboards, bass etc…….

BB: how much influence did you have with the artwork and direction visually?

Nybras: When Jeff was still alive, we didn’t make any decisions without each other when it came to art and direction. We worked quite well together. We did have some artwork for this last release but Moribund already had the album art done. Other than that, Moribund asked for a lot of suggestions, old photos, etc. for the final layout.

BB: When you guys started, did you ever think that you’d have the kind of notoriety that WOTBM has experienced?

Nybras: When Jeff let me hear the very first recordings of what he had, I loved it and thought it was so different from anything that was coming out of our scene at the time. I figured it would get some attention due to the fact of Jeff being in Masochist, and at that time, Masochist were definitely becoming an influence on bands and fans around the region. I was really surprised to see the excitement worldwide for the new album since it had been twenty years since releasing Black Sun, and we kind of fell off the face of the Earth when Jeff died.

BB: What is one of your favorite memories of Tchort?

Nybras: I think back to some of the fun shit we would do and you have to laugh about it. I think one of my favorite memories was when, after a show in downtown Lansing with Masochist and Production Grey. We were drinking and had a statue of the Virgin Mary. We spent probably an hour or more trying to break the thing in the middle of the street at two am. The thing didn’t want to break! He was always fun to be around, and when he let his guard down and let you know the real Jeff, he was a good dude.

Xaphan: My one man project Dark Psychosis was definitely influenced by Tchort! We both had a love for psychedelic music like Pink Floyd or Hawkwind, but also loved stuff like Bathory and Burzum. But watching him during my time in Masochist and during sessions for the first album definitely inspired me to give doing a one man project a try. Tchort was an amazing guitarist and a master at improv, he was one of my biggest inspirations as a friend and fellow black metal musician.