Shed the Skin – The Forbidden Arts 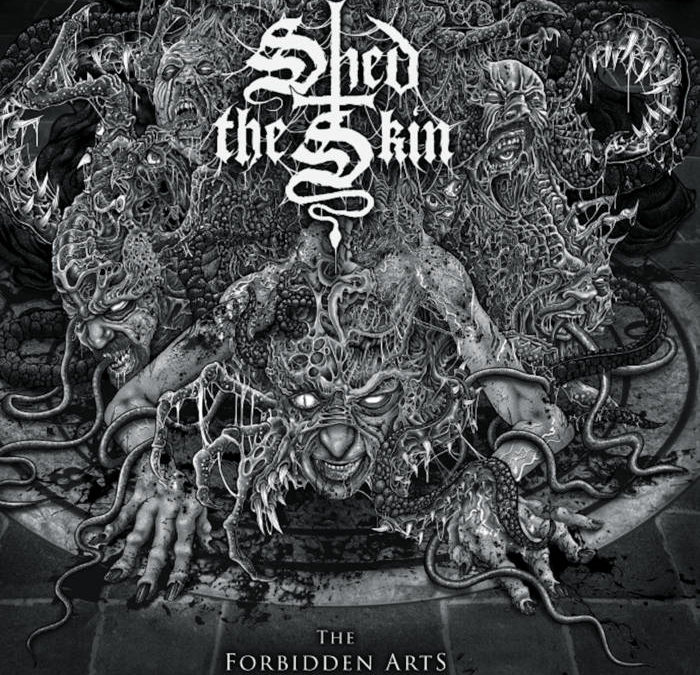 I remember how it felt to realize that the more venerable elite of the metal world were beginning to die in greater numbers from things like cancer and heart disease–killers of “The Old”–rather than the drugs, suicides, and accidents, which dominated the statistics of my peers. I was in my early twenties then and the intervening decade(-ish) has dragged another generation of artists into that grim spotlight. It’s an inevitable fact: scenes age and people die. After the passing of Tom Rojack from Cleveland underground death metal act Blood of Christ, some of the band’s notable contemporaries united for a tribute show and named the new band “Shed the Skin” after a Blood of Christ song. The simple premise of “big-time musicians return to underground music” proved so popular that this love letter to Cleveland death metal has since grown into a whole epistolary with Kyle Severn (Incantation, Acheron) and Matt Sorg (Ringworm) at the core of a superstar lineup that also includes vocalist Ash Thomas (ex-Acheron), bassist Ed Stephens (Ringworm), and Brian Boston (ex-From the Depths) on keys. The group have maintained a fairly steady work pace since their debut 7” in 2014 and now they’re back with their third full-length, The Forbidden Arts, coming June 26 from Hells Headbangers.

Shed the Skin have always counted their riff-writing ability among their greatest strengths, and The Forbidden Arts has their best writing to date. All of their best-ever riffs, all of their best-ever arrangements; every track on the new album is at least as good as the best track on each of their previous releases. The band describe the album as their “[our] most varied work to date, but rest assured that this is still 100% SATANIC DEATH as [we] intended from day one”. This isn’t one of those albums where a death metal band cleans up the distortion tone and makes thoughtful, mature music for their first time, but it does benefit from a top-notch mix and master job from Unisound’s living legend: Dan Swanö (Edge of Sanity, ex-Bloodbath) which keeps the ferocious string tones from getting in each other’s way and allows Ash Thomas’ diabolical vocal style to cut through the wall of sound. At the heart of it all is the thundering fury of Kyle Severn’s drum kit; the engine that propels The Forbidden Arts through its forty-seven minute run time without a single wasted beat.

The combined experience and professional skill set of Shed the Skin’s collective roster has helped the creation of The Forbidden Arts avoid the major pitfalls typical of American death metal: the strings sound great and distinct from each other despite heavy distortion effects and low tunings; the vocals are masterfully balanced in the mix; the songs are the right length, and when they do venture past the “three-ish minute” mark, they’re guided by Severn’s stellar drum work and never get lost in riff salad. But despite an appreciable layer of professional sheen, Shed the Skin still use enough awkward note intervals and maintain a tight enough sound that they don’t stray into the pop metal arenas of “mall metal” bands and their spacious mix full of music-school-perfect note choices (like say… Earth Rot). The Forbidden Arts is the result of a lot of hard work on behalf of everyone involved, and that effort shows on the finished product. Every riff is a killer, and they transition between each other and over tempo shifts seamlessly thanks to attention to detail in the turnaround sections and the unstoppable engine room crewed by Severn and Stephens.

The band isn’t afraid of repetition, hooks, and even guitar solos. Much of the song structure and arrangements are taken from classic rock traditions, but only those elements which best suit Shed the Skin’s Satanic Death Metal instrumentation and compositional philosophy. A great example is in the form of lead single and teaser track “Archons of the Final Crusade” which makes for a decent summary of the band’s overall musical ideology for a single song. It’s hard to call any one track on The Forbidden Arts a “standout”, because they’re all so good and each manages to explore a slightly different idea within the umbrella of their schtick, and they don’t overuse their gimmicks to force an artificial sense of variety within the sound. Diabolical mid-to-slow tempo riffs, guitar solos, sinister keyboard parts, all are relegated to one or fewer per song to keep things from sounding cluttered. Speaking of keys, their presence in a death metal outfit is almost always a “make-or-break” factor and in this case the restraint and minimalist philosophy behind their inclusion places Brian Boston’s work here firmly in the former camp; his parts on tracks like “Trow of Tragedy” never feel misplaced or like they’re clashing with the rest of the band’s mood.

Another strength for the record is its balance of Side A’s thrash-tempo, moshpit-heavy songs with Side B’s more mid-tempo and exploratory song structures. Album opener “Skeletal Firestorm” has elements of second wave thrash all over it, and its follow-up “Archons of the Final Crusade” has some of the most “trve kvlt” underground-style death metal riffing I’ve ever heard from a “big-time” band like this. Later in the record, “The Laundress”, “Black Bile of Ceres”, and album closer “Veins of Perdition” display broader musical influence and slower speeds without sounding out of place. This would be a great album to play live with its front-loaded delivery of energy allowing moshers to catch their breath in the later songs before the secret and final track: a cover of a song by Matt and Brian’s old band From the Depths that serves as a tribute to former From the Depths vocalist Jim Konya, who also passed away recently; a memorial tribute song to Cleveland underground death metal by a band founded, themselves, as a memorial tribute to Cleveland underground death metal.

Recommendation – The Forbidden Arts has all the makings of a modern classic and as such makes for a good “anytime” record. The songs are brilliant as a whole but could just as easily be enjoyed separately on a playlist or shuffle. This should be my new benchmark for a great American death metal album; it does everything it’s supposed to do flawlessly and never does anything it shouldn’t.